To begin the game shuffle the cards and give each player six cards. The rest of the cards form the draw pile.

At the beginning of every player’s turn check all of the merchant ships to see if the current player captured any of them (more details on this later). The player then either draws or plays a card. Since there is no hand limit, a player can use as many turns as they want drawing cards. If the player chooses to play a card they follow the rules for the type of card that they played.

The key mechanic in Loot is claiming merchant ships. When a player plays a merchant ship in front of them, they have claim to that ship. If no one plays a pirate ship against that card before the player’s next turn, the player who played it gets to keep the card and the associated victory points.

If during a battle two or more players are tied for the lead, no one can claim the merchant ship until someone breaks the tie and is leading at the beginning of their turn. Players who weren’t originally tied for first can also add additional cards and end up winning the merchant ship. 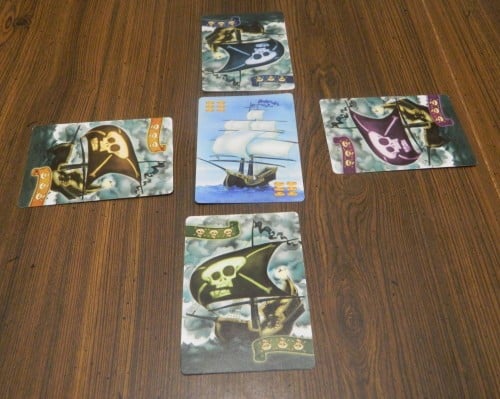 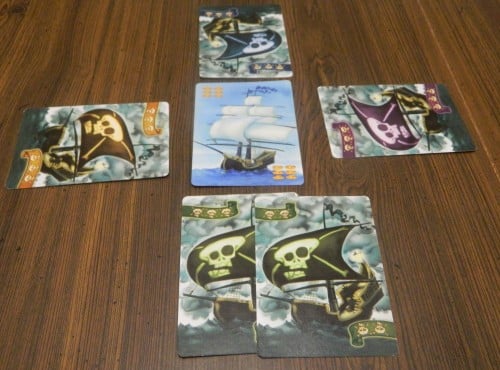 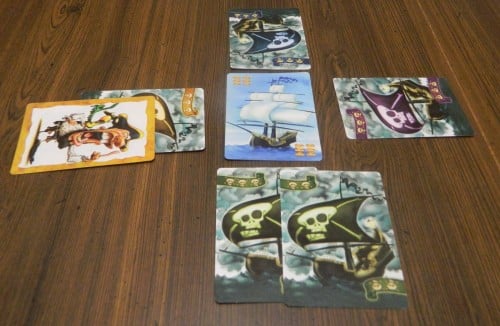 The left player counters the bottom player by playing the yellow captain. If none of the other players are able to play a captain or the admiral before it is the left player’s turn again, the left player will claim the merchant ship. 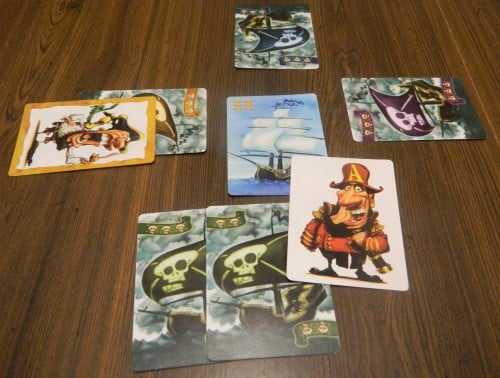 The game continues as normal until the draw deck is depleted and any player runs out of cards. Players add up all of the coins on the cards that they won during the game. The player subtracts from that total the number of coins on the merchant ships still left in their hand. Whoever ends up with the most coins wins the game.

We at Geeky Hobbies have played a lot of Reiner Knizia games. With hundreds of games to his name that is not particularly hard to do. Most of Mr. Knizia’s games are of the average variety. They are usually fun but are rarely groundbreaking. Loot follows this pattern by being a good but not great game.

Loot’s greatest strength is that it is fun to play. Loot is a pretty typical card game. You play cards of various strengths in order to claim cards worth various victory points. The game doesn’t have a lot of strategy to it but it has just enough to keep you engaged. The rules are quite simple so the game should work pretty well as a family game for families with older children (the game recommends ages 10+). There is nothing particularly difficult in the rules but it takes a little while to adjust to knowing what you can do on any particular turn. As players get more acquainted with the game turns go much quicker. On average I would say that a typical game takes around 20 minutes to complete.

The game supports 2-8 players. I have played the game with three and four players and I would have to say that the game was better with four players. I would say the ideal size would be four to six players. With more than six players I think the game will be bogged down with so many players and each player would not be able to make many moves before the game ended.  With two or three players luck becomes too big of factor since there are not enough players to mitigate some of the luck.

Loot is a good game and could have been a great game if it wasn’t for luck being too big of a factor in the game. Loot has a tendency to give one player no chance at winning the game due to getting a poor selection of cards. It just seems that at least one player always seems to get a ton of merchant ships. At least in my experience drawing merchant ships is usually not a good thing. You are much better off drawing pirate ships and waiting for one of the other players to play the merchant ships. The only real benefits to drawing a merchant ship is that you can use an admiral card on it and you may be able to claim it without using any pirate ships if no one challenges you for it.

The components are pretty good overall. The artwork is well done and designed so it is easy to see the values of the different ships. The card stock is also pretty thick. The only problem I had with the cards is that for some people it may be hard to see the difference between the blue and green colored ships. I didn’t have trouble differentiating the colors but some players had some issues. I don’t know why Loot couldn’t have chosen a different color that stood out more from the other colored ships.

Overall I would consider Loot to be one of Gamewright’s best games. The game is just fun to play. The game is also quick to play and easy to learn. This makes Loot a good filler card game. If the game had a little less reliance on luck (merchant ships) the game could have been great. If you can get over the reliance on luck, I think you will enjoy Loot and should consider picking it up.