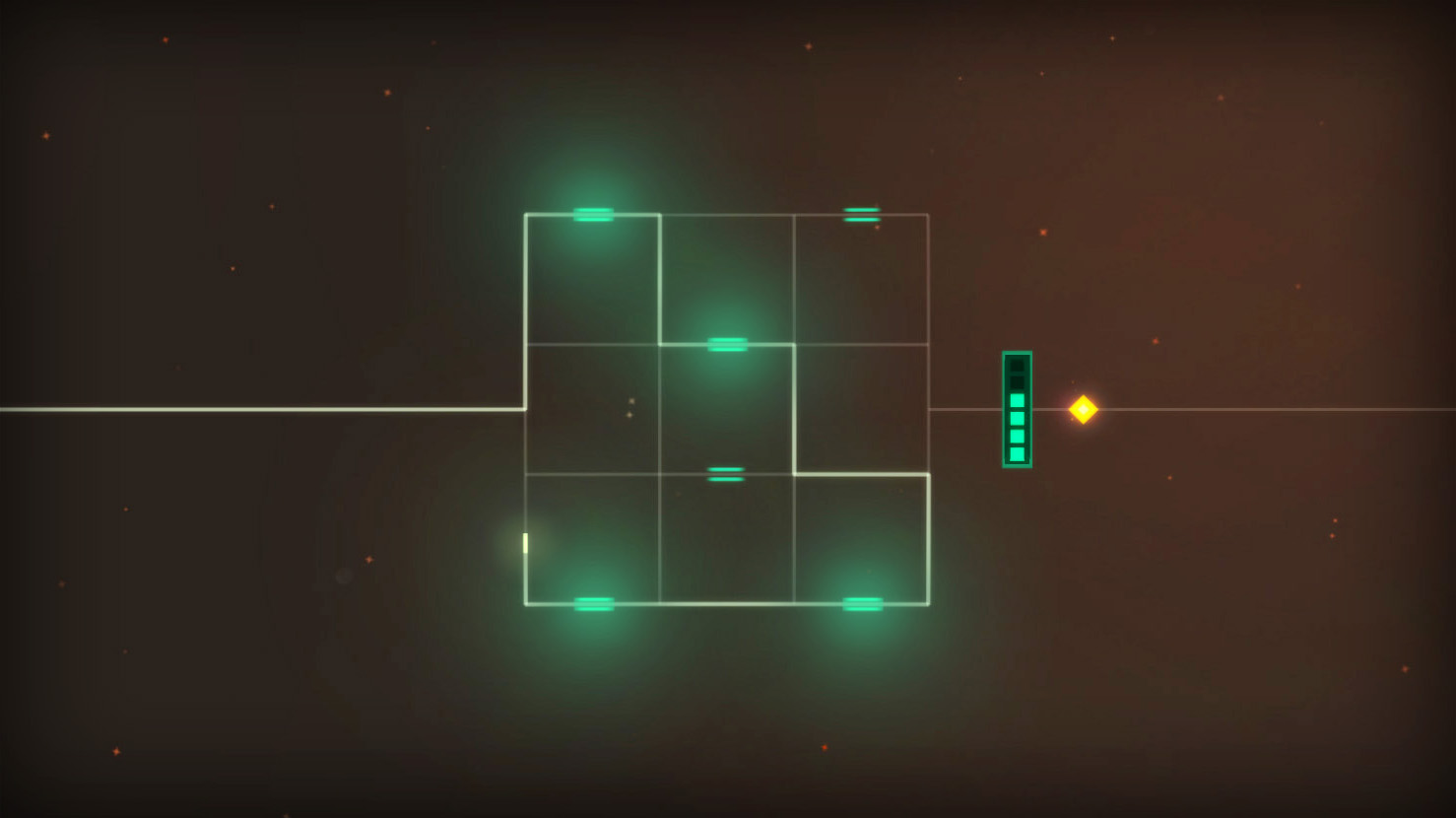 As technology has advanced the natural tendency for the video game industry has been to make larger and more complex games. The first video games had just a couple colors, basic graphics, and a couple buttons. Today’s video games are much different. So what would a game look like today if it eliminated everything but the bare necessities? The jump button? Gone. Fancy 3D/2D graphics? Gone. What you are left with is Linelight the perfect example of more not always being better.

Because it eliminated all of the frivolities of modern games, Linelight chose to focus on what is most important in video games, gameplay. So what do you do in Linelight you may ask? Basically you move around on lines. Now that sounds really exciting you are probably thinking in a sarcastic manner. It might sound boring but it actually leads to a very good puzzle game.

In Linelight you play as a small line section that moves around on lines trying to collect diamond shapes. Since there is no jumping or attacking, Linelight becomes a puzzle game where you need to figure out how to proceed further along on the lines. Each new world introduces some new mechanics which you must use to clear barriers or reach another line that you otherwise wouldn’t be able to reach. You will also eventually encounter “enemies” that you must avoid and use to open up new paths.

As a whole I would say the puzzles are in the easy to moderately difficult range. I didn’t have much trouble solving the puzzles in the early worlds but the puzzles did get more challenging in the bonus worlds. I play a lot of puzzle games though and thus are pretty good at solving puzzles. If you don’t play a lot of puzzle games you may find them to be more challenging than I did. Even though I found the puzzles to be a little too easy they are never so easy that you feel insulted. I honestly can’t think of a puzzle that I didn’t enjoy because it was too easy. Even if I figured out a puzzle really quickly I still appreciated how the game found a creative way to use the game’s mechanics. I also like that if you can’t figure out a puzzle Linelight actually lets you skip quite a few of the puzzles and continue on with the rest of the game. I didn’t skip any of the puzzles I encountered though and I would recommend against it unless you are really stuck.

Outside of the puzzles being a little easy, I really only have one more complaint about Linelight and it is king of nitpicky. Throughout the game there are hidden paths that lead to the game’s bonus puzzles. These secret/bonus puzzles just so happen to be some of the game’s best/most challenging puzzles. The problem is that they are kind of hard to find. I played through the whole game, trying every path, and I only found 16 of the 60 bonus puzzles. Unless you want to move in every direction on every line you basically have to get lucky to run into most of them. While this gives you a reason to replay the game to find them I just wish the game would have done something to make them a little easier to find. I would like to play all of the bonus puzzles at some point but I don’t know if I want to waste the time just trying to find them. This is a nitpicky problem though since when one of a game’s problems is that you just want to play more of it, it can’t be that big of issue.

With the game being solely comprised of colored lines and other small shapes, you would think that there wouldn’t be much to the game’s presentation. I have to say that I was surprised by how much I enjoyed the presentation of Linelight. It is an example of how to make a nice looking game while remaining minimalist. The game does more with colored lines than a lot of games do with the latest technology. Add in the fantastic music/score and Linelight has a great atmosphere.

As I was playing Linelight the one thing that I was really worried about was the game’s length. Usually these type of puzzles games aren’t particularly long. Add in the fact that you can get through a lot of the puzzles within a minute or so and I was expecting Linelight to be just a couple hours long. Once again Linelight surprised me since the game actually lasts around 6-7 hours if you don’t skip puzzles and try to find as many of the bonus levels as you can. The reason the game is so long is that there are actually 300 puzzles in the game (240 normal and 60 bonus). If you want to find and complete all of the bonus levels I think the game could take 8-9 hours to finish. For this type of indie game you really couldn’t ask for much more.

When I first saw Linelight I knew I would like it since I really like these minimalist style puzzle games. Even though I had high expectations, Linelight still found a way to exceed them. While it might not look like much at first, Linelight succeeds at what is most important, gameplay. The puzzles are sometimes a little easy but they are just so well designed. I was surprised with how many unique ways the game uses the few mechanics that it has to create hundreds of puzzles. Add in the great atmosphere and there is very little to complain about when it comes to Linelight.

If you don’t really like these type of puzzle games, Linelight probably won’t be for you. If you like puzzle games though I think you will love Linelight like I did.