Being a fan of the Simpsons, I didn’t really know what to think of The Simpsons Don’t Panic. Most licensed games are not very good. You could actually say most of them are terrible games meant only to cash in on people’s love of the source material. The Simpsons Don’t Panic looked like it had some potential though. It shares a lot in common with the cheap tie in products but I thought the idea of making a game built around mini-games actually had quite a bit of potential. While its’ not terrible, The Simpsons Don’t Panic could have done so much more to become a better game.

Assemble the cooling tower and place it in the center of the gameboard. Sort the items and place one color in each section of the cooling tower base. Sort the cards by color and shuffle them. Place all of the puzzle pieces into the box lid. Each player takes a barrel as their playing piece. All of the other contents are placed to the side of the gameboard. The players roll the die to determine who is the first player (the player who rolls the lowest).

The object of the game is to gather one of each type of item from the center of the gameboard. Players will receive an item by reaching one of the spaces in the center of the board next to the cooling tower. After completing the required action the player takes the item corresponding to the space that they are on. 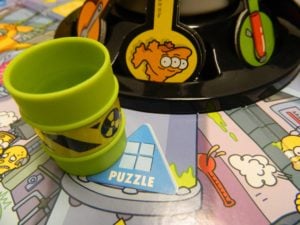 The first person to get one of each piece of junk wins the game. 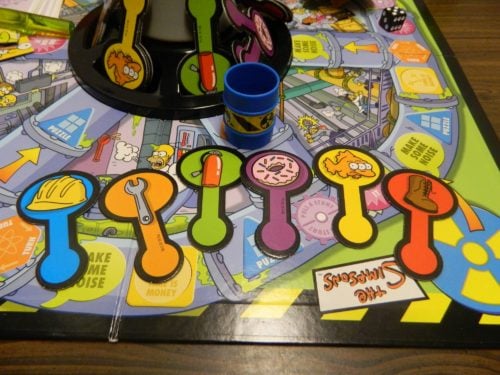 The thing that intrigued me most about The Simpsons Don’t Panic is the idea of the game essentially being a game of mini games. I think the idea of mini games is a good idea that hasn’t been used enough in board games. While there have been video games dedicated to mini games including the Mario Party and Wario Ware series, there aren’t many board games that have utilized a similar concept. Space Cadets has a mini game element to it where each player does their own mini game to complete their job but I would like to see a game where players have to play a lot of mini games throughout the game. Combining several mini games with a speed element had the potential to make a fun game which I would have enjoyed. In some areas The Simpsons Don’t Panic does a decent job but it fails in too many areas to be considered a good game.

On the positive side the mini game idea can be fun at times. Some of the mini games are kind of fun when you add in the speed element where you have to complete them as quickly as possible. A lot of these games are really simple though so they aren’t going to be something that you are going to want to play over and over again. As a whole they do a good enough job reinforcing my belief that a board game made out of mini games could make for a good game.

The Simpsons Don’t Panic is a game that can’t be taken seriously. If you are going to take the game seriously you won’t like the game. The game is meant to be more of an excuse to do some wacky/funny things than being an actual game. The gameplay itself is far from strategic and relies heavily on luck. This is mostly because the different actions you take in the game are far from equal. Some actions take seconds to complete or even add time to the timer while other actions can take up most of your time. The game is not fair and is not really designed to be fair. You need to go into the game not caring who ends up winning or you won’t enjoy the game.

While the game’s concept actually shows potential, the game just doesn’t work right. I think this mostly comes from bad design decisions. The biggest problem is that a lot of the mini games are just not that fun. While some of them are occasionally fun, after you have done them a couple times they feel like more of a chore than anything else. Having to speed through them makes them a little more enjoyable but there is only so many times you can toss a ball into the air before you get sick of it.

Some of the game’s mechanics could have used some more work before the game was released. The Time is Money mechanic is actually an interesting idea since it adds a little strategy where you might try to plan your moves to try to land on one when you are almost out of time. This could have been an interesting mechanic but it is too easy to manipulate to your advantage. You could easily end up getting two to three times as much time as another player just because you were lucky enough to land on one of the spaces.

The other mechanic I didn’t really care for was turning the cooling tower. The mechanic itself wasn’t bad since it mixes things up by occasionally moving the items around the board. More thought could have been put into the mechanic though.One of the spaces in the center of the board is one of these turn spaces. This means that a player can move to the space and end up turning the cooling tower getting an item that they don’t need. Players can also use this mechanic to manipulate the board to have the items come to them instead of moving around the board to collect the items.

Another problem with the game is that is just isn’t long enough. If you are at least decent at speed games I can’t see a game taking longer than 15-25 minutes. In the game we played one player finished and another was only one item away within three or four turns. Since most of the tasks don’t take a particularly long time to complete you will be able to roll the die quite a few times in one turn. This means that you can get multiple items in one turn. While the game would have suffered if it was too long, the game probably should have taken a little longer so there was a better chance for players to catch up after being stuck doing one of the longer tasks.

The Simpsons Don’t Panic is not a terrible game but it fails to be as good as it could have been. The idea of a bunch of mini-games sounded like a good idea for a board game. While some of them are kind of fun at first they can get repetitive pretty quickly. The game is pretty silly overall as the winner of the game will most likely come down to which player is the luckiest. It definitely will not be a game that you will play a ton but I could see having a little fun with it for a couple games.

If you are a Simpsons fan and like the idea of a game built around silly mini games, The Simpsons Don’t Panic might be worth picking up for a couple dollars. If you don’t like the Simpsons or silly games that rely on a lot of luck though, it probably won’t be for you.

If you would like to purchase The Simpsons Don’t Panic you can find it online: Amazon