In the past I have looked at quite a few different trick taking games on Geeky Hobbies. I personally don’t have strong feelings either way about the genre. The trick taking games that I have played are perfectly fine but I don’t really see why so many people love the genre. While I really haven’t played any terrible trick taking games, I also haven’t found a great one either. Today I am going to look at Dilbert: Corporate Shuffle which is basically a re-themed version of the Great Dalmuti with a couple tweaks here and there. I was intrigued to try The Great Dalmuti since it is one of the higher rated trick taking games being just outside the top 1,000 games of all time on Board Game Geek. After playing the game I have to say that I was surprisingly disappointed with the game.

How to Play Dilbert: Corporate Shuffle

Each round begins with the big boss playing as many cards as they want of the same number. The next player clockwise must play the same number of cards of a number lower than the previously played cards. If a player cannot play any cards, they must pass. Players continue playing sets of cards until all of the players have passed. The last player to play cards wins the trick and gets to lead the next set of cards. 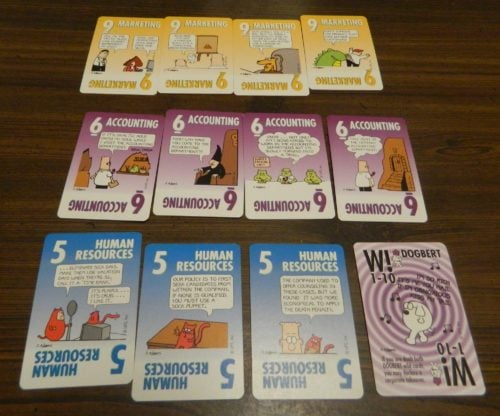 The first player to play their last card becomes the big boss in the next round. The second player to go out becomes the little boss and so on until the last player with cards remaining becomes the junior intern.

My Thoughts on Dilbert: Corporate Shuffle

Being a slightly tweaked version of a game that is close to a top 1,000 board game of all time, I was expecting Dilbert: Corporate Shuffle to be a pretty good game. While it is not a terrible game, I have to say that I found it to be underwhelming. I have never been a huge fan of trick taking games but this game made me wonder why The Great Dalmuti is so loved. The game honestly just felt like another extremely generic card game.

On the positive side once you figure out the Big Boss/Little Boss/etc. rules, Dilbert: Corporate Shuffle is a really simple game to play. Basically one player plays cards of the same number and all of the other players have to play the same quantity of cards of a lower number. That is basically all there is to the game.

There is nothing particularly wrong with this mechanic since similar mechanics are used in a lot of card games but it just feels like there isn’t much to the game. While people claim there is a decent amount of strategy to the game, I don’t really see it. Outside of keeping sets of the same number together, I think it is usually pretty obvious what cards you should play at a given time. While you can ruin your chances at winning the game by making a mistake, I don’t really see players winning the game due to their strategy.

Without much strategy, the game relies quite a bit on luck. Basically when you are dealt cards you want one of two things with the cards you are dealt. Getting a lot of low cards makes it easy to win hands since it is hard for other players to play lower cards. What might be even better though is to get dealt a lot of the exact same card even if it is a higher card. This might be better since if for example you get six cards of the same number you can get rid of all six cards right away and it will be hard for other players to match so you likely will win the trick as well. The absolute worst hand to be dealt though has to be to get a lot of high number cards without getting many cards of the same number. If you are dealt these cards I can’t see you ever winning the hand.

While we are on the topic of luck I have to say that I am not a fan of the Big Boss/Little Boss/Senior Intern/Junior Intern mechanics. I can see that the mechanics are in place so players at the bottom can climb their way up to the top while the players at the top can fall to the bottom. I just don’t think the mechanic is really worth it. It adds unnecessary complexity to the game for new players. The roles also make the game even more dependent on luck. Players stuck at the bottom have a significantly smaller chance of winning the game due to the top two players getting an unfair advantage. If I ever would play this game or The Great Dalmuti I can’t see using these rules.

As far as the components are concerned, you basically get what you expect out of the game. You get typical playing cards with a Dilbert theme. If you like Dilbert you will probably like the cartoons on the cards but if you don’t you probably won’t. Dilbert fans will probably enjoy the components but I don’t think other people will get much out of them.

Should You Buy Dilbert: Corporate Shuffle?

While I have mostly complained about Dilbert: Corporate Shuffle, it is not a terrible game. It is just a very average card game and I have played much better card games. The game is quick and easy to play and is perfectly serviceable if you want a card game that you don’t have to put much thought into. Dilbert: Corporate Shuffle has a little strategy but relies more on the cards that are dealt to you than any choice you make in the game.

If you would like to purchase Dilbert Corporate Shuffle you can find it online: Amazon

Oh my, what a harsh review! This is one of my favorite games of all time. The reason it is fun has everything to do with WHO you play with. The rules are pretty basic. What's fun is when the players add a bit of role-playing and give the bosses extra real-world privileges and treat the interns poorly. For example, the Big boss gets the comfy chair, but the intern has to stand or sit on the floor. Make the intern go get coffee. Bosses talk smack to their employees. That's the fun part.