What Is Knight Squad?: 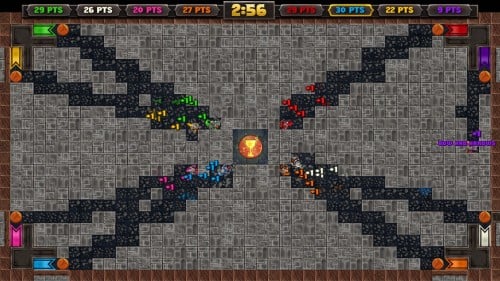 Knight Squad is a multiplayer arena game that combines elements of Bomberman, Gauntlet, and even soccer into one surprisingly fun package. One to eight players (either local or online) compete in a variety of game modes like capture the flag, last man standing, and soccer and can pick up many different power-ups and weapons to aid them. Also included are six extremely difficult singleplayer challenges that will actually provide you with a tough challenge.

Game modes in Knight Squad include:

Note: Buying Knight Squad will get you nine different game modes. However, to get the other four modes (Soul Hunter, Jail Break, Arms Race, and Serial Killer) as well as three extra knights, you will have to buy a $4.99 piece of downloadable content.

While Knight Squad is almost exclusively a multiplayer game and much better if you have at least a few friends to play it with (either locally or online), you can play all of the game modes singleplayer if you want to or have to (using bots to fill in for human players). Unlike a lot of games, the bots in Knight Squad are actually pretty intelligent and can put up a good fight (they are even respectable on medium difficulty and become pretty tough on hard difficulty). Also, while they will only provide you with a few hours of content (they would have added maybe 15 to 30 minutes if they weren’t as difficult as they are) you can also play the six singleplayer challenges.

What I Liked About Knight Squad:

Honestly, almost everything. When I saw Knight Squad on Steam’s list of upcoming releases, I thought it looked interesting but I never imagined I would become addicted to the game. However, the first night I played it I wound up playing it for four straight hours and had to force myself to stop in order to get to sleep at a reasonable time. Knight Squad is a very fun multiplayer game with enough different game modes to keep you addicted.

One of the main reasons I love Knight Squad so much is that I’m a gamer who doesn’t really like to play multiplayer games with strangers (I’m an introvert). Whenever I get a multiplayer game to review on Geeky Hobbies, I almost always just play it with Eric. Since multiplayer games are usually better with more than two, this usually means playing with bots who are usually pretty idiotic. However, in Knight Squad the bots are actually quite competitive so if you only have a few players to play with (or just yourself), you can still have a lot of fun with the game. They will definitely give you a run for your money, especially on hard difficulty. Obviously, the game is better with more actual human players but it still works well otherwise so if you don’t have a lot of friends to play with, Knight Squad is a pretty good choice for a multiplayer game.

The biggest reason why Knight Squad is such a great game comes with its wide variety of fun and interesting game modes. In particular, I quickly became addicted to soccer (as someone who really wants to play Rocket League but is too cheap to buy it at this point, Knight Squad’s soccer with deadly weapons makes for a fun alternative), crystal rush, capture the flag, and domination. While all four of those are team-based game modes, the free-for-all games are pretty fun as well. There are a few game modes that I don’t see myself playing that often (juggernaut, capture the grail, and last man standing) but most of them are fun enough to play again and again.

The only problem (which wasn’t even a problem for me) I can see with Knight Squad is that it seems like almost nobody is playing the game. The game has only been out for a few weeks and it is already very hard to find people to play with online. While this isn’t a problem for me (I would rather play against the game’s very competent bots than play online with other people anyways), if you refuse to play multiplayer games without a full group of human players, Knight Squad might not be for you. Unfortunately, it seems like the multiplayer might already be pretty much dead. The game really needs to increase its player count. However, unless you are a stickler for playing with real players it really isn’t essential to play online anyway. Local games and well-programmed bots are more than enough to make up for the lack of real people playing Knight Squad.

While Knight Squad is $14.99 plus a $4.99 DLC package to get the entire game and that is a little bit pricey, I do think the game is worth it as long as the concept interests you. You don’t even really need to get the DLC package if you don’t want to since most of them are some of the weaker game modes in Knight Squad and the game comes with plenty of different modes anyway (nine without the DLC).

In just a couple days of playing Knight Squad, I am already up to seven hours of playtime. While that really isn’t enough to cover a $14.99 (or $19.99) game, I can already see this being a game Eric and I play for a few hours every few weeks which would easily make it worth the price. It is a very fun multiplayer game and one of those games that you will play every so often for a year or so.

While it is very hard to explain why I enjoyed Knight Squad so much, I found it to be a very surprising hidden gem on Steam. The game comes with a lot of different game modes, the multiplayer is fun, and the bots put up a worthy challenge if you don’t have enough players to play with. Recommended.