The objective of Get It Wrong To Win is to answer questions incorrectly to be the first player to collect thirty tokens.

Each player is given five tokens to start the game. All of the cards are shuffled together. The player who owns the game gets to go first.

Unlike most trivia games, the objective in Get It Wrong To Win is to provide incorrect answers to the questions that are asked. The round continues until either the timer runs out or the current player actually answers a question with the correct answer. After the round is over the current player takes one token for each question that they provided an incorrect answer for. If they were able to incorrectly answer all five questions they get a bonus token. Play then moves to the player on the left.

A player cannot just provide any answer to a question. All answers provided must be relevant to the question that was asked. For example if the question asked “How many months are there in the year?” you would have to answer with a number and not something like “green” since that doesn’t relate to the question asked. If there is a question of whether an answer is relevant the other players get to decide if it should count. During each round a player can only use the same wrong answer once. 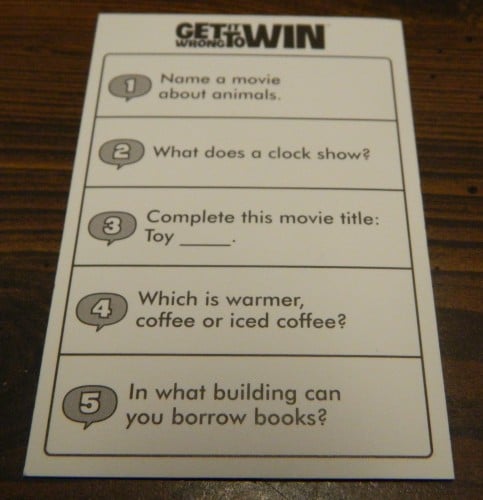 Here is an example of some incorrect answers you could use for the questions on this card.
Name a movie about animals? Star Wars
What does a clock show? Weight
Complete this movie title: Toy Movie
Which is warmer, coffee or iced coffee? iced coffee
In what building can you borrow books? Book Store

The deck of cards in Get It Wrong To Win has some special cards that add some additional rules to the game.

All Play: All players will get to answer the questions on the card. The first person to provide a wrong answer gets the token for the card. If a player provides the correct answer the reader gets to take a token.

Give Away: The current player has to give one of their tokens to each player starting with the player on their left. If the player runs out of tokens, the players who didn’t receive a token don’t get one.

Steal: The current player gets to steal one token from every other player.

Double-Up: These cards play like normal cards except that a player will get two tokens for every incorrect answer. If the person gets all five questions the bonus is worth two points instead of one.

The first player to collect 30 tokens wins the game.

The trivia game, a staple of the board game industry. Pretty much every topic in existence has had a trivia game made about it as some point in history. While there is the occasional trivia game that actually tries to do something new for a change, most trivia games stick to the basic formula of answering questions for points. Today I am looking at a game that twists the trivia genre around. In Get It Wrong To Win you do exactly what the title says by trying to answer every question with a wrong answer instead of providing the correct answer. While Get It Wrong To Win is far from special, it was more enjoyable than I was expecting.

It turns out that the game is harder than I would have thought. The game is not hard to play but sometimes you need to really think before providing an answer or you could easily end up providing the correct answer. Some of the most enjoyable moments of the game is when a player realizes that they actually provided the correct answer when they weren’t trying too.

If the game allowed you to provide any incorrect answer, it would have been really easy and the game would have suffered since you wouldn’t have had to put any thought into your answers. The game thankfully forces players to give an incorrect answer that is actually relevant to the question answered. This is a lot harder than you would think but makes the game a lot more enjoyable since the best part of the game is trying to figure out a “correct” incorrect answer. Some of the questions are worded in a way that makes you really have to think to find a “correct” answer. If you could just blurt out any random answer it would have been really easy but with this rule in place you actually need to think of the correct answer and then try to come up with a similar answer that is actually wrong. Even the best players will rarely get all five questions done in time to receive the bonus.

While the concept behind having to provide relevant wrong answers is an interesting idea, the game is lacking of anything else.

The special cards are pretty pointless in my opinion. The cards that just have players give or take tokens are a waste of time since the best part about the game is actually answering the questions so these cards take away from that. The cards that have all players answering at the same time are also not very good since they cause too much chaos as all of the players try to answer at the same time so it is hard to see if anyone answered correctly. Finally the double point cards will probably skew the points too much in one player’s favor. I personally would recommend ditching the cards that take or give chips and treat all of the cards like normal trivia cards.

I think the scoring system could also have used some work. The game basically uses a normal scoring system based on points. Get It Wrong To Win is the type of game that really didn’t need a scoring system in my opinion. The game works better as a game where players just see how well they can do in any particular round. The scoring system itself doesn’t really add much to the game especially since it is quite easy to get to thirty points pretty quickly.

Component wise the game is decent. The tokens are made of pretty thin cardboard and for the most point are pretty pointless since you can just keep track of score on a piece of paper. The cards are not bad but I wish there was more of them. The game only has 200 cards and some are special cards that have no questions on them. You could probably get through all of the questions after a couple games. I wonder how well questions from other trivia games would work. For example cards from Trivial Pursuit would probably be really easy to play with since it should be pretty easy to make up an answer especially since most people don’t won’t know the right answers to the question in the first place. I am actually pretty curious to see how well other cards would work with the game.

Overall Get It Wrong To Win is neither a great nor bad game. It is an interesting twist on the trivia game. I had some fun with the game and it should work well in a party setting. While the game seems easy, it is more challenging than you would expect. Unfortunately the game doesn’t have a lot else going for it which means that it is the type of game that I would only play occasionally. If you like party games and the concept looks interesting to you I think you should get some fun out of the game. Otherwise I would probably recommend passing on Get It Wrong To Win.

If Get It Wrong To Win sounds interesting to you, check it out on Amazon

I’ve lost the timer for this game. Any idea how long each player gets to answer their set of questions?

Unfortunately I got rid of my copy of the game so I can't check to see how long the timer is. I would guess the timer is pretty short as the game is based around players not having much time to think out the answers they provide.