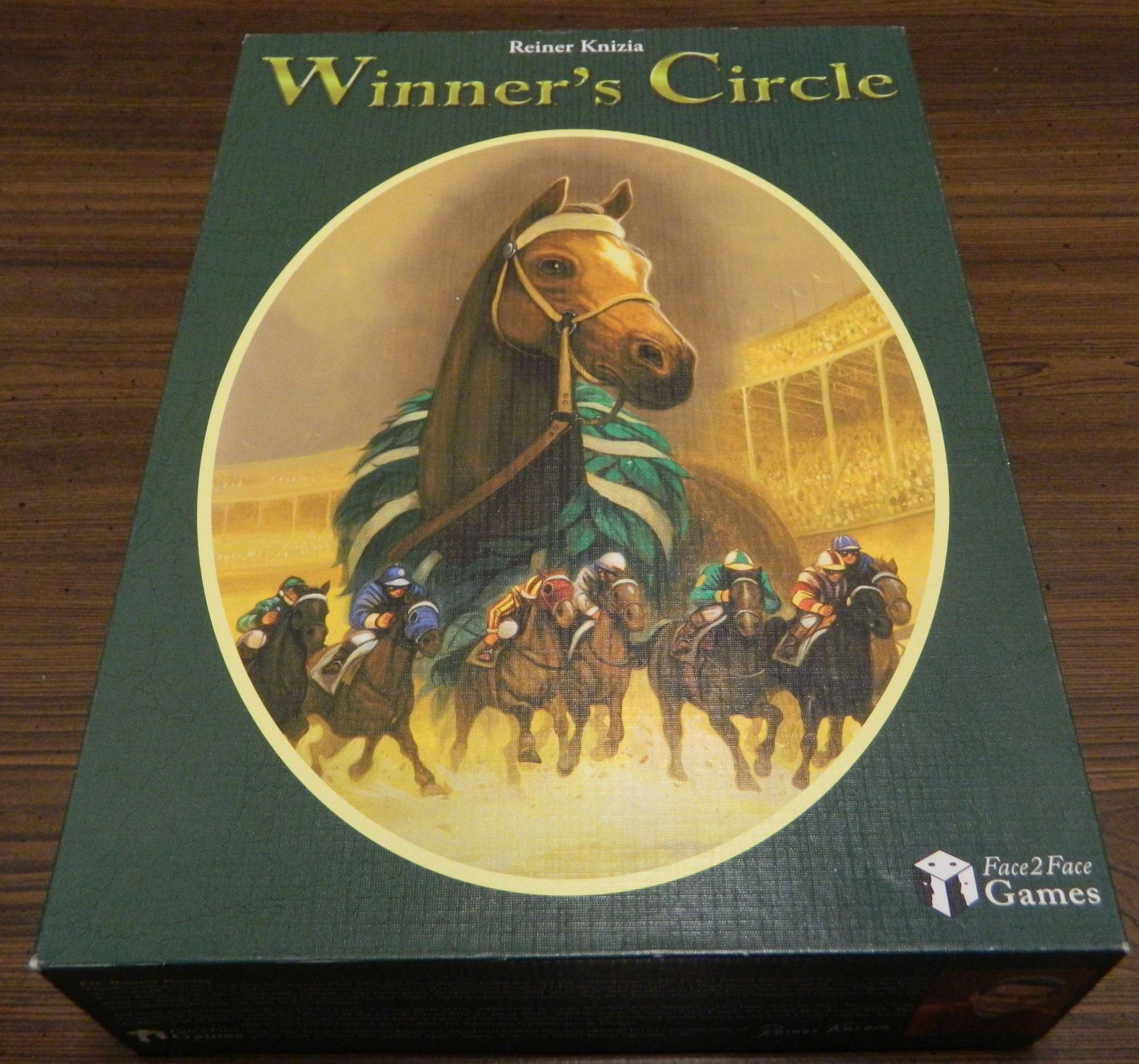 After three races the player that has won the most money wins the game.

For the first race randomly pick who will place the first bid. In other rounds the player with the most money places the first bid. Starting with the first player the players take turns placing one of their betting chips on one of the horses. Players keep placing chips until all three of their chips are on different horses. No player may play two of their chips on the same horse but several different players may bid on the same horse. The one chip is worth one bid while the two chip is worth two bids.

The player who played the first chip will be the first player to move the horses. The current player rolls the die. They look at all of the face up horse cards and determine which one to move based on the symbol rolled and the number next to the symbol on each card. After a horse is moved the card is flipped over.

Once all of the horse cards have been flipped face down, they are flipped back over so the next player can choose from any of the horses.

When moving a horse two horses may not occupy the same space on the game board. If a horse would move onto a space occupied by another horse, place the horse on the first unoccupied space behind the space where the horse would have landed.

The first horse to reach or pass space 18 gets the pace chip placed on their card. If this horse places first, second or third in the race; players who bid on it will receive extra money.

Players win when they bid on one of the horses that placed in the top three spots. Starting with the horse that placed first, count how many bets were made on the horse. The two chip is worth two bets while the one chip is worth one bet. Look at the corresponding spot in the payout chart and pay all of the players that bet on the horse the corresponding amount. If a player used their two chip they get twice the payout.

If one of the top three horses took the pace chip during the race, the players who bid on it receive an extra $100 for a one bid chip or $200 for a two bid chip.

Anyone who bid on the horse that placed last will lose $100 per bet. If they used their two chip they would lose $200. If a player can’t pay the full amount they pay what they can.

If this was the third race all payouts are doubled. If it was the first or second race, players take their betting chips back. All seven horses are discarded, seven new horses are picked and the board is reset.

After the third race’s winnings are paid out, the game ends. Whoever has the most money wins the game.

These are additional rules that players can use to change up their game of Winner’s Circle.

Each player uses all four betting chips (0, 1, 1, 2) and all bets are placed face down. The 0 chips are used for bluffing and don’t pay out and don’t count as bets for the payout chart.

The two chips only count as one bet when figuring out how many bets were placed on a horse when referencing the payout chart.

Let’s start by talking about bidding in the game. While the game uses the “0 chip” as an alternate rule, I would very highly recommend using them in the game. Except for teaching other players how to play the game or maybe when playing the game with younger children, I don’t know why you would ever want to play the game with the normal rules regarding bidding. I never even bothered playing the game with face up bids since I just don’t see the point of having face up bids. If you don’t use the alternate rules everyone knows what horse everyone else bid on so there is no guessing about which horses other players actually want to see win the race. Playing the game knowing what every other player bid makes the game way too reliant on luck since players have no real opportunities to implement any strategy since other players know exactly which horses they should sabotage to hurt their opponents.

Adding in the zero tile and making all bids face down changes the gameplay significantly. No longer do players know exactly which horses they should sabotage since every player has a dummy tile to throw off all of the players. While every player will know the four horses that you bid on, they don’t know which three you actually care about and which was a decoy. With this setup players need to try and keep secret which horses they are actually helping and which one they are pretending to cheer for. This forces players to try and hide their moves by moving their decoy and other horses to try and mask which horses they actually want to win the race. Players will regularly sabotage horses that they have no stake in so it is best to try and keep the horses you want to win secret for as long as possible. Eventually players will have to indirectly reveal which horses they bid on but it is usually best to wait for as long as possible to do so.

Another thing you need to consider when bidding is what horses the other players are bidding on. In a creative scoring twist, the more players that bid on the horse the less money that horse will win for each player if it ends up winning the race. This is interesting mechanic since you can take two different approaches to betting. You can try to bid on horses that no one else is bidding on which will get you more money but you won’t get much help from the other players. Otherwise you can bid on the same horses as other players which will make it easier for the horse to win but you also won’t win as much. With four or more players you will usually have at least two people bid on every horse but some horses generally get more bids than others. The zero chips are particularly interesting in this way since players may place their zero chip on a horse making it look like the horse has more support than it actually has and then once the race starts they don’t actually help out the horse.

Die rolling in general is usually not the best mechanic since it usually just adds luck to a game. While the die in Winner’s Circle also adds quite a bit of luck to the game, there is more to the die rolls than in most games. You need to analyze all of your different options after rolling the die. If you roll a symbol that really helps out one of your horses you are probably going to use your roll to move your horse forward. You can’t just look at the horses that you are rooting for though, since your die may be better used on a competing horse. Since each horse has to move before any horse can move again, you may want to use the die roll to minimize the number of spaces moved by a competing horse.

The other thing that makes the die rolling interesting is the fact that no two horses may occupy the same space on the game board. One of the variations removes this rule but I think that is a mistake since not letting two horses occupy the same space adds strategy to the game even if doesn’t make a lot of sense thematically. This is important since this can either hurt or help you. Since horses must move to the next unoccupied space behind the occupied space they land on, this could make a horse lose one or more spaces that they otherwise could have moved. If you really want to sabotage a horse you could actually make a horse not move forward any spaces.

Another interesting mechanic in the game is that each horse is weighted in different ways which actually makes each horse run quite differently. With the horse head symbol being more prevalent on the dice, some horses thrive by having a larger number for this symbol which makes them really consistent horses. While they move at a pretty steady pace, they lack the ability to make big moves. On the other hand there are some horses that are boom or bust. These horses have a lot of low movement numbers but they have one or two huge movement numbers that make up for it. These horses can easily be sabotaged by other players but if you roll the right symbol at the right time these horses can quickly get out to a big lead. One horse in particular can pretty much win the race within two movements if the right symbol is rolled.

What is interesting about the horses is that there doesn’t appear to be a clear cut strategy on what type of horses to bid on. While the boom or bust horses have more risk, they seem to win just as often as the more steady horses. The key with the riskier horses though is that you need another player that is going to help you try to get the horse to place. If you are the only one supporting a risky horse you don’t stand much of a chance since all of the other players are going to be constantly sabotaging the horse which makes it unlikely that it will win. On the other hand if you pick a steady horse you need to make sure that you don’t get stuck behind a horse that will keep getting in your way that will sabotage your movement. The variety in the type of horses that win each race means that Winner’s Circle has quite a bit of replay value.

While I usually don’t talk a lot about the contents of a board game, I have to say that I really liked the contents for Winner’s Circle. I wish there was a little more to the betting chips and I would have preferred paper money instead of cardboard tiles. Otherwise I loved the game’s contents. The horse figures in particular are quite nice. I just wish there was a bigger difference in the colors between the different horses since it is sometime hard to tell the different horse colors apart. While it wouldn’t have made sense thematically, I kind of wish the game would have used colors like blue, green and other colors not associated with horses in order to make the distinctions a little easier to notice. The other contents are really nice since they are made out of thick cardboard and should last for a long time.

Here are a couple other quick thoughts:

Winner’s Circle is a lot like Reiner Knizia’s other games, simple with just enough strategy. The game is far from a strategic masterpiece and relies a lot on luck but that is not necessarily a bad thing. The game is quite fun and it is really easy to play even with people that regularly don’t play board games. For a game whose two main mechanics are bidding and die rolling, the game has enough strategy to make the game interesting.