“Silly Soup” is a game meant for families with young children, so not surprisingly the game is not very complicated. The game features a motorized “soup bowl” that spins and moves around a vinyl table cloth. The goal of the game is to grab all four of your color marbles while the soup bowl moves around and then be the first to get the large white marble. The person that scoops up all of their marbles and the white marble first wins. It’s that simple. 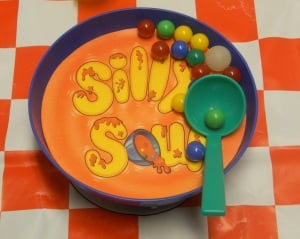 This is basically what the game comes down to. Use your spoon to scoop up all your color marbles (and the white one) before anyone else does. The bowl will be spinning and moving around though. 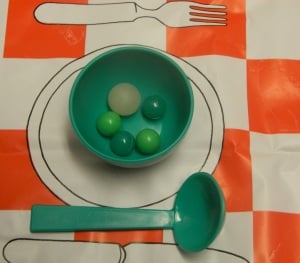 Green has scooped up all four of their marbles and the white one and is the winner of this game.

“Silly Soup” is relatively fun and this is coming from an adult’s point of view. Children should definitely love the game. The game is quick, extremely easy to play, and fun for families (especially ones with young children). However, even though “Silly Soup” is fun to play and I enjoyed playing it, there are some problems with it that keep it from getting more than a middle-of-the-road score.

First of all, this isn’t exactly what you’d call a game with a lot of depth that you’ll get an hour out of a couple times per year. The games are extremely short and you’ll probably get sick of it after 15-30 minutes (or 5 to 10 games) and want to play something else. While it will entertain you for awhile (I even laughed out loud a couple times while playing it), it’s more of a game you throw in a closet and play a couple quick games every so often. Don’t expect much more out of “Silly Soup.”

The games are extremely short partly due to the lack of marbles. Four per person (plus the white one to end the game) is nowhere near enough. I understand that only a certain amount would fit in the soup bowl but they could have given you at least 10 to get to win (and just have you add the extra marbles in after you finish getting the first group). Because you only need to scoop up four of them (plus the white one), games will often take two minutes or less to conclude.

The contents are mostly plastic but they aren’t that bad of quality. The play mat isn’t the highest quality though and in my opinion is a little too big (you technically don’t even need the mat, the game is just worried about the soup bowl scratching your table).

There really isn’t much to write about “Silly Soup.” It’s just a relatively fun family game that is pretty fun to play if you go in expecting to just play a few quick games. However, if you are looking for a game with more substance which will eat up more time, “Silly Soup” unfortunately isn’t it. It’s better as a quick appetizer game you pick up and play every so often. If you find it at a thrift store or rummage sale for a bargain and you have young children, I would give it a try. In the end, I gave the game a middle-of-the-road 2.5 just because it really isn’t a game you’ll play often.