On a player’s turn they will perform five actions. The actions are as follows:

Drawing Cards: The current player starts their turn by drawing cards from one or both of the decks of cards. If the player has less than five cards, they draw cards until they have five in their hand. If the player already has five cards in their hand, they get to draw one card. At any time during the game a player can pay five prayer points in order to draw another card.

Activate Leader: Every player that still has a leader will perform this action. The current player gets to choose one action first followed by the next player in a clockwise direction and so on. The players can choose one of the following actions:

Playing Cards: All of the players have the ability to play cards from their hand. The current player can play as many cards as they want while the other players can play one card. The current player plays their cards first and then the rest of the players play cards in a clockwise manner. A player can choose not to play a card. In order to play a card the player has to pay prayer points equal to the number next to the tiki head on the card that they want to play. 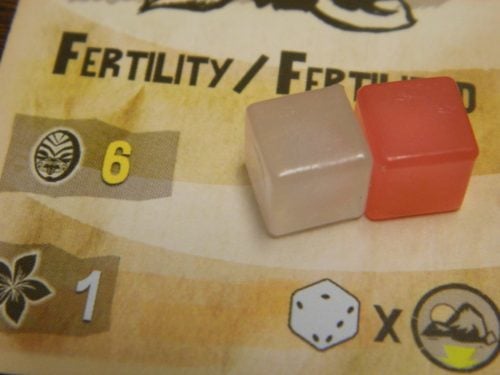 To play this card the player has to pay six prayer points.

After everyone has played their cards, the cards are resolved in the order that they are played.

There are three types of cards:

All of the cards use symbols to indicate the effects of the card. The symbols are as follows:

There are three cards that have a special ability.

Convert Families: After cards are played, the players determine which families will convert to new religions (go to a new player). The families that will convert depends on each player’s happiness. 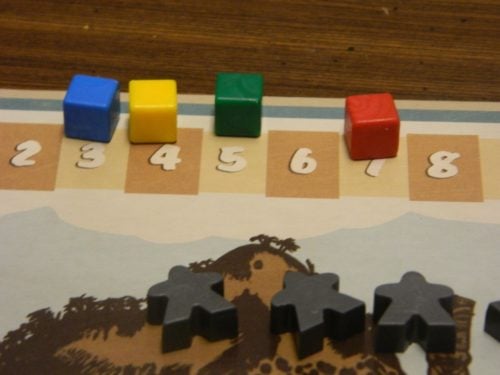 A player is not eliminated from the game unless they have lost all of their families and no longer have their leader.

At its’ heart Kalua is a take that game. Basically you are trying to mess with the other players more than they mess with you. You can build up your own group of followers and their happiness but the other players will quickly tear it down. The only way to really win the game is to be aggressive and try to take down the other players before they take you down. Not being a huge fan of take that games, I really didn’t know what to think of Kalua. The game does some interesting things but has quite a few issues that keeps it from being anything more than a very average game.

One positive with the game is that it is pretty easy to learn for a game with as many mechanics as the game has. The game might look a little complex but it is quick and easy to teach. I would say that the game takes five to ten minutes to learn. Once you understand the process of each turn the game moves pretty quickly. The main hurdle to understanding the game is understanding what all of the different symbols on the bottom of the cards mean.

The thing I liked most about Kalua is the idea that you have to balance happiness, prayer points and number of families. I thought it was clever that happiness and prayer points were kind of inverses of each other. The happier your people are, the less prayer points you get. If your people are too unhappy though you will end up losing your families to other players. This balancing act is an interesting idea and could have made for a really interesting game. At times the mechanic works but other times it just doesn’t work.

I applaud Kalua from giving players different options of how to play the game but some of the options don’t seem like good options until they are forced on you. For example the ability to sacrifice your leader is a terrible option unless you have to do it. Unless you have the card that will immediately bring back your leader, there is no reason to sacrifice your leader before you have next to no families remaining. Having a leader gives you the ability to get back into the game so I don’t know why you would give up that ability just to take five families. This decision just feels like a last ditch effort to get back into the game.

Card draw luck also seems to be pretty prevalent in the game. The players who draw the best cards in the game have a big advantage in the game. In particular the temple cards, amulet cards, and the cards that give you your leader back are the most powerful. The card that gives you your leader back is powerful as long as you can take all five families from the Kalua board since it nets you four families. The amulet card is really powerful since it can prevent you from losing families when all of the other players get decimated by a disaster. The most powerful card though is the temple card. This is by far the most powerful card in the game since whenever a player was able to play one they almost immediately moved into first place with the most families and happiness.

The biggest problem that I had with Kalua was that the game drags on for far too long. There is just too much back and forth in the game. One player will get a lead in happiness or number of families and then the players will just target that player and will take their happiness or families from them. At times the game feels like an exercise of passing meeples and cubes around the table. Kalua is the type of game that would work best as a 15-20 minute game. The game runs closer to an hour for most people. If all of the players are really aggressive though I could actually see the game ending in minutes.

The biggest problem with the length is that the beginning of the game feels kind of pointless. What you do early in the game really has little impact on the final outcome of the game. Unless you play really poorly or get unlucky and get eliminated early, your early actions don’t have much of an impact. With families and happiness changing so often, your early actions don’t feel like they matter since they will get reversed by the end of the game. Since the early game doesn’t really matter it just feels like you are wasting time until enough families are eliminated from the game where it is possible to eliminate the other players. Nothing really can happen in the game until a lot of families are eliminated because it is too easy to get new families which prevents players from being eliminated. Since the lead changes so often it just feels like whoever gets lucky at the end of the game will end up winning the game.

The instructions are fine for the most part but there are a couple areas where more explanation could have been helpful. The biggest problem with the rules is what happens when a player is down to just their leader. When I played the game I interpreted the rules to mean that a player was not eliminated from the game if they were down to just their leader. The instructions never say what happens though when a player loses families and they don’t have any families left other than their leader. Based on the instructions that say that a player is not eliminated when they still have their leader, we played the game where the player just didn’t lose any families in this situation. I don’t think this is how the game is intended to be played though since I am guessing that a player is forced to sacrifice their leader if they lose families and have none remaining. If that is not the case this rule ruins the game because it just lets players stay in the game for way too long and lets players that should have been eliminated from the game easily come back and win the game.

Component wise the game is decent. The artwork is pretty nice and uses a theme not used by a lot of other games. The balance between happiness and prayer points is also a really nice touch for the theme. The cards make heavy use of symbols which lead to some confusion when you are first learning the game but you eventually get used to them. Otherwise the components are quite average. The meeples are typical meeples. I think the game could have used something better than cubes to represent prayer points though.

Kalua is a very average game. The idea of trying to balance your followers and their happiness is an interesting idea that could have made for a good game. I had some fun with the game. The problem is that luck plays too big of role in the game and the game drags on for way too long. The early game doesn’t seem to even matter as it feels like whoever gets lucky at the end of the game will end up winning. Kalua is not a terrible game and I wouldn’t be opposed to playing the game again. It probably isn’t something that I would request though.