Divide all of the players into two teams: Team Alpha and Team Omega. Insert the DVD into a DVD player and choose which project you want to play.

Each team writes down their answer to each question on a piece of paper. At the end of all seven tasks the two teams will swap their answers and both teams will check the other teams’ answers. The team that got the most correct answers will win the bonus money for that challenge which is as follows:

The team that won also gets to fire one member from the other team. The member that was fired has to sit out the next challenge but then returns for future challenges. A player cannot be fired twice in a row and all players from a team have to be fired once before a player can be fired for the second time.

If one team is the clear winner after six challenges (has more money), the team with less money is fired. 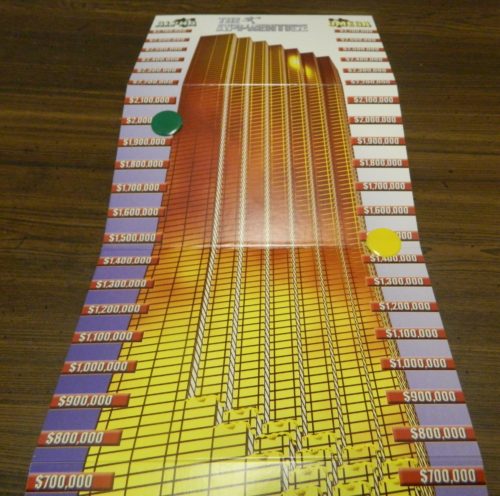 The players from the winning team then face off individually. Another challenge is played like in the previous rounds except that each player is playing for themselves. Whichever player gets the most correct answers wins the game. If there is a tie there is a sudden death round between the tied players to determine the winner.

I have played hundreds of different board games. Some are really good. A lot are really average. Then there are your occasional terrible games. The worst game I have ever played was Public Assistance. Some of the many reasons Public Assistance was so terrible included broken rules, generic gameplay, and worst of all it is offensive towards poor people. I didn’t think I would ever play a game as bad as Public Assistance but The Apprentice DVD Game comes very close to it.

The main reason I hate this game is that it is one of the most cheaply made games I have ever seen. I paid probably $0.25-$0.50 at a rummage sale for the game and I still feel ripped off. Outside of the cost to make the DVD, this game must have cost around $0.25 to $0.50 to make. This was an extremely cheap attempt at a cash in on the popularity of the show (this game was made back in 2006 when the show was still really popular). The game only comes with three components. First there are the chips used to keep track of the score. These are some of the cheapest chips I have ever seen. Second there is the gameboard. The gameboard is made of cheap cardboard and the board’s graphics are poor. The publishers of the game were so cheap that they couldn’t even include a sheet of paper with the rules on them. Instead they chose to print the rules on the back of the gameboard. I can’t even explain how annoying this is especially if you have to refer to the rules during the game. Finally there is the DVD that has pretty poor video quality among other issues that I will get to shortly.

So you might be wondering why I picked up this game. Well any sealed game for less than $0.50 is enticing. I haven’t encountered many games that weren’t worth $0.50 even if I didn’t particularly care for them. Being a fan of the early seasons of the show I was interested if it could make for a good game. I have always been interested in business and I thought the game could have some fun in it since how can you go wrong for such a cheap price. The game’s box claims that the game let’s you “play the show at home”. This is blatant false advertising. The Apprentice DVD Game is a glorified trivia game that has next to nothing to do with the show. It didn’t even need to be a DVD game since the game could have easily just used cards.

You would at least think that the trivia questions would deal with the show. Only two of the seven questions in each round have anything to do with the show. Otherwise the questions deal loosely with challenges from the show as well as ways for Donald Trump to stroke his own ego. Who really creates a trivia game about themselves which actually contains questions about that person bragging about themselves?

Talking about Donald Trump, how much does he actually appear in the game you may ask? Very little. I am guessing that Donald Trump filmed all of his scenes for the game in about 10-15 minutes. Otherwise you are treated to Bill Rancic (winner of the first season) for most of the rest of the game. Bill Rancic must have really got into some money troubles to appear in this atrocious game.

Let’s get into some of the other problems that I had with the DVD. The DVD doesn’t give you nearly enough time to choose your answer for most of the questions. Good luck discussing your answer with your teammates before the next question begins. This gets even worse on the math questions where unless you are a math genius there is no way you can figure them out in time other than making an educated guess since you can’t use a calculator. Yes you did read that right, there are math questions in this game. The worst thing is that the intros for each question seem to be almost as long as the amount of time you get for the actual question.

While The Apprentice DVD Game is a functional trivia game, it just isn’t a very good one. The questions aren’t very interesting and some of them are so random that you are pretty much just guessing at the answer. There are also questions that pretty much require you to either live in New York City or be very familiar with the city to know the answers.

So the trivia questions aren’t very good and the rest of the game is not any better. First I dare a team to be able to discuss their answers without the other team overhearing them. Unless you whisper and are at other sides of the room, you will overhear what the other team is discussing. Also with the game requiring the DVD both teams can’t be too far from the TV or they won’t be able to hear the questions and video clips.

Next let’s get to one of the only things the game somewhat shares with the show. Like The Apprentice, players will get fired in the game. They get rehired a round later which kind of makes getting fired kind of pointless. This mechanic doesn’t work since it just makes it even more likely that the team who won the previous round will win the next round since they will have more players participating. This is even worse when there aren’t many players on a team since if there are only two players per team, one team will only have one player playing while the other has two. Basically this mechanic makes it much more likely that a team will just keep winning round after round.

Now that is bad enough but I have yet to talk about possibly the stupidest mechanic in the entire game. When you get to the last round the game asks whether one team is winning by more than a certain amount. This amount is so high that the only way one team could be winning by that amount is if they won every single round. So if one team hasn’t won every round, the game makes the last round worth enough money that the other team can catch up no matter how poorly they did in the rest of the game. I can understand creating a catch up mechanic but this goes way too far since it essentially makes the whole game outside the last round pointless. I wonder what the game does if one team has actually won every single round of the game.

So the final thing I want to talk about can either be seen as a positive or negative depending on how you look at it. The game only has six projects which means that the game can only be played six times before you have to repeat a project. This means that there is next to no replay value in the game.If you for some reason wanted to play the game more than six times, you will be forced to replay the same projects you have already played. On the positive side you will not have to play the game more than six times.

It is just hard to explain how poor this game truly is. This is one of the poorest thought out and cheapest made board games I have ever seen. It wouldn’t shock me if this whole game was made within a couple days from the idea being formed to the game being finalized. The components are so cheap. The gameplay isn’t thought out. There are next to no redeemable qualities about this game. Outside of not being offensive like Public Assistance, this might have been the worst board game I have ever played. The Apprentice DVD Game was obviously a quick money grab made to try and take advantage of people who liked the show.

I honestly can’t really recommend this game to anyone. I paid around $0.50 for the game and I feel ripped off. The only people I could see getting any enjoyment out of this game are people that absolutely love The Apprentice or Donald Trump. I have decided to end this review by quoting Donald Trump himself from the game. “Thank you for playing. It has been fun.” I have to disagree with you on that Mr. Trump.