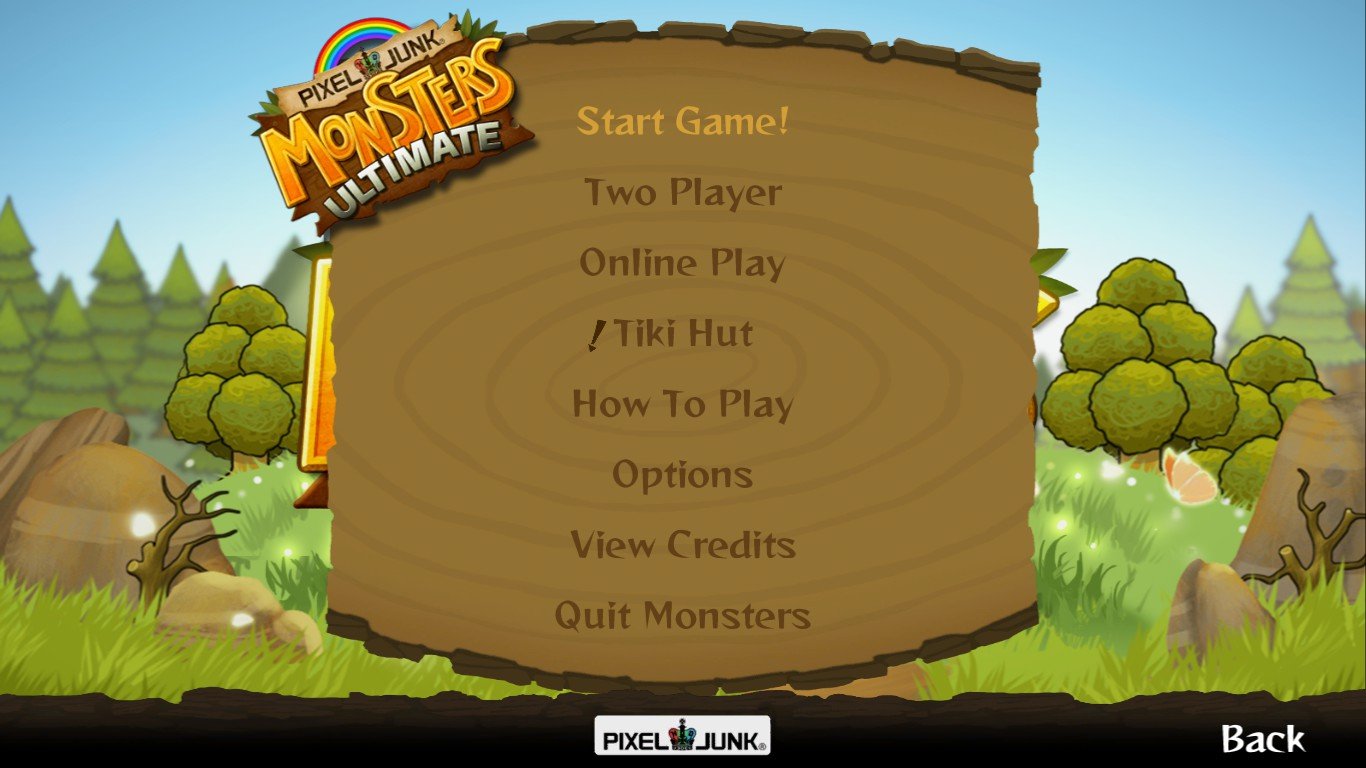 In Pixeljunk Monsters Ultimate you control Tikiman The Forest Defender. Vicious monsters are attacking Tikiman’s children and you need to stop them. Tikiman must turn the nearby trees into various towers that will strike down the encroaching monsters.

Being a tower defense game you had to expect that there wouldn’t be much to the storyline. Essentially the storyline just provides a background to why you are a tikiman and why you are building towers in order to stop various monsters. Once the game begins the story is never mentioned again.

The thing I liked most about the game is that it is entirely co-op. You can play every single level in the game with at least one other player. There are other co-op tower defense games on the market but it is always nice to see another tower defense game implement it. I ended up playing the entire game co-op. I am guessing that the game plays perfectly fine single player but I think it is a much more enjoyable experience playing the game co-op.

For the most part the levels in Pixeljunk Monsters Ultimate follow the basic process of building towers to destroy monsters that will drop money that can be used to build more towers. The game includes some other levels that have some unique rules. For example a couple levels have a rule where you get quite a bit of money at the beginning of the level and then none of the monsters drop money throughout the level. I found this to be interesting since it makes you think about the level differently. The game features some of these unique type of levels but I wish the game had more of them.

As far as difficulty is concerned, I would consider Pixeljunk Monsters Ultimate to be a moderately difficult tower defense. I played the entire game co-op and we probably failed maybe two or three missions. It is not that hard to complete each level since you can make some mistakes and still retain lives to finish the game. Perfecting levels without losing any lives are another story. Except for the very easy levels it is very hard to perfect a level on your first try so you generally need to play the level a couple times in order to perfect it.

I found this last way to be the most interesting. This mechanic makes your time a resource in addition to the gold and “gems”. You need to budget your time and not waste it since the time you waste translates into lost upgrades. You need to strategically decide which of your towers need to be upgraded in order to figure out where your character should be spending their time. This mechanic also fixes one of the problems with the tower defense genre, waiting around with nothing to do. In most tower defense games you need to just sit around waiting when you have no money to spend on towers. With this mechanic you can think about where you want to move your character next instead of just sitting there watching enemies die.

Another mechanic I found to be interesting was the idea that you had to purchase the special towers every level in order to be able to use them. In most tower defense games you get to keep a tower once you have unlocked it. This is nice in that it gives you a lot of flexibility on which type of towers you want to use. In Pixeljunk Monsters Ultimate you can only get a couple of the towers every level so you need to pick wisely. If the level features a lot of air you will need to purchase the air tower while you will have to purchase the heavy ground towers in levels that mostly feature ground troops.

The game has several unique mechanics but I believe it is missing two things in particular.

First it would be nice to know what types of enemies you will face in a round. Since some towers are better against some enemies than others it would have been helpful to know what enemies would come later in the level. Unless you have already played the level or cheated and looked the level up online there is no way to tell what is coming next. During your first playthrough you pretty much just need to guess or wait till the last minute to build towers. When I played the game I ended up having to keep my upgrade “gems” until late in the game because I needed to have enough available in case I needed them to purchase a tower that is needed to defeat a specific monster. Each level should have started with a screen that shows all of the monsters that will show up in that level. The game didn’t need to spell out which round each monster would show up but a list of monsters that would show up in the level would have been helpful.

The other mechanic that is missing is a way to direct your towers to target specific enemies. A lot of tower defense games do this and it is quite valuable. Some games let you click on enemies to specifically target them while others always target the furthest along enemy. In Pixeljunk Monsters Ultimate it seems like the towers randomly choose an enemy to attack. This is really frustrating especially when you have enough towers to kill all of the monsters and some sneak by because your towers for some reason weren’t targeting the ones furthest along. This is especially annoying when this leads you not to perfecting a level that you would have otherwise perfected. If the game just implemented a mechanic where the furthest along monster was always attacked this problem would have been eliminated.

These two mechanics lead to the biggest problem with the game which is the insistence with perfecting levels. It is hard to perfect levels since you don’t know which monsters are coming and there is usually at least one or two monsters that sneak by. If you knew ahead of time which monsters were coming you would know which towers to build and you wouldn’t have to wait until the last minute to build them. If your towers were smarter and targeted the furthest along enemy, enemies wouldn’t sneak by your defenses. Unfortunately perfecting levels sometimes comes down to luck. Except for the easy levels you will not perfect many levels on your first playthrough and many levels will take a couple tries.

The problem with the insistence of perfecting levels is that you need to perfect most of the levels in order to play all of the levels and unlock all of the towers. I don’t see a problem hiding some content for people who 100% a game, but you end up missing several levels and towers if you don’t perfect enough levels. Some of the towers are really important for your continued success as well which means you almost have to perfect enough levels in order to unlock the towers.

Overall the graphics in Pixeljunk Monsters Ultimate are pretty good. All of the artwork is done in a 2D style. The artwork is pretty colorful and does a good job supporting the overall theme of the game. I kind of wish there was a little more variety in the types of enemies but the enemies that are included are interesting.

The value you get out of Pixeljunk Monsters Ultimate depends on how much you like tower defense games. Each level takes around a half hour to complete if you complete it the first time. If you are at least average at tower defense games you can expect to spend around 20-25 hours playing through the main game. If you want to 100% the game it will take considerably longer since some of the levels will be quite hard to perfect.

With the game being $10 you are getting a pretty good value for a game that lasts over 20 hours. Pixeljunk Monsters Ultimate has been bundled before though and is likely to be bundled again. If you can get the game in a bundle it is definitely worth its’ cost.