Since 1983 Jenga has probably been the most popular dexterity game and is most players go to game when they think of dexterity games. Personally I don’t really have strong feelings either way about Jenga as I don’t think it is either a bad or good game. I think Jenga is a solid but unspectacular dexterity game. Being a popular board game franchise it is no surprise that many spin-off games have been made for the Jenga franchise with one of those games being Jenga Max which I am going to look at today. While Jenga Max does some interesting things for the franchise, it fails to really differentiate itself from its’ predecessor.

Setup the tower and place all of the blocks in the holding areas at the bottom of the base. The players choose who will go first. Three blocks are connected to the ring at the top of the tower. These are the only blocks that can touch the top ring of the tower. 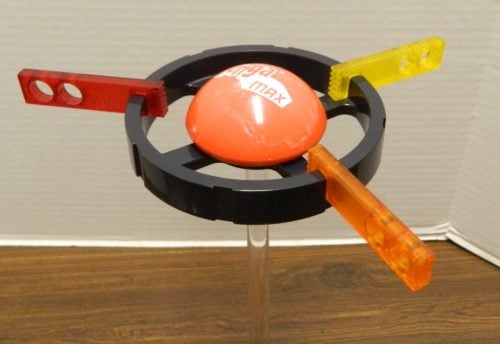 The tower has been setup and three pieces were added to the ring. The game is ready to play.

On each player’s turn they have to connect one block onto one of the three groups of blocks. When placing a block the player has to use the hook on the block they are adding to connect it to one of the holes on one of the blocks already played. Once a block has been played, the players have to wait for five seconds to make sure that the tower does not fall down. 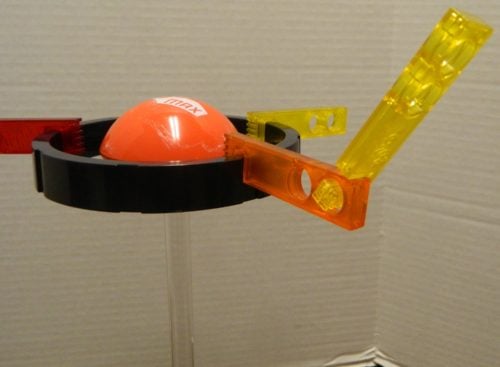 The current player has connected the yellow block onto the orange block.

If blocks are knocked off the tower but the tower itself doesn’t fall, the player who knocked them off has to add all of the them back onto the tower before play passes to the next player. The player does not have to place the blocks in the same spaces they were before they fell off. 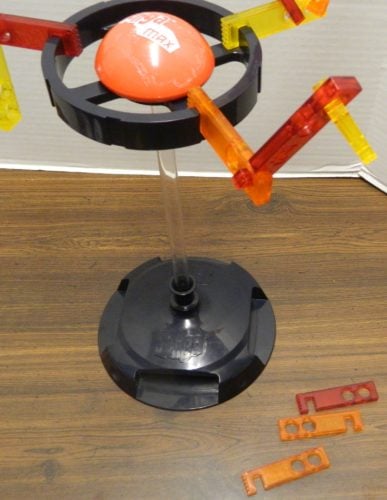 Three blocks have fallen off the tower and will have to be added back to the tower by the player who knocked them off.

If the tower falls down the game ends. The last player to successfully place a block wins the game. 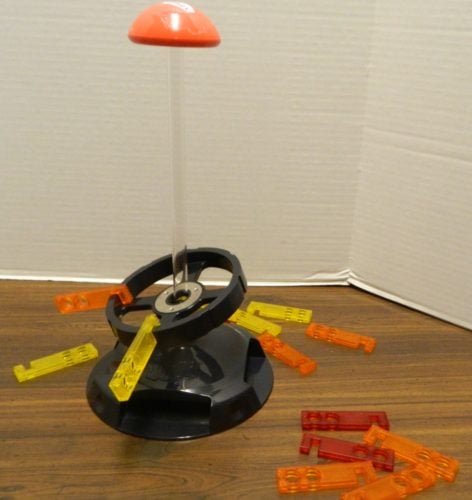 The tower has fallen down. The last player to successfully place a block has won the game.

Being heavily inspired by Jenga (sharing a name was kind of a give away), it is not surprising that the two games share a lot in common. Jenga Max does distinguish itself in a couple ways though. The most obvious difference between the two games is with how the towers are assembled. Instead of just taking a block from the bottom of the tower and placing it onto the top of the tower, in Jenga Max you have a lot more flexibility in how you want to place the blocks. You can have blocks hang down from one another or you can make the blocks hang up and over the tower. The possible towers you can make in Jenga Max are almost endless. This adds some strategy to the game since you can place blocks trying to make the tower fall on the next player’s turn or play it safe by placing a block in order to better balance out the tower.

While Jenga Max does give you some flexibility in how you place the blocks, it otherwise is just Jenga. You are still just adding blocks to a tower like so many other dexterity games. If you don’t really like Jenga, Jenga Max is not going to change your mind. Basically I felt Jenga Max and Jenga were pretty equal with there being some things I preferred in each game.

Probably the biggest problem that I had with Jenga Max is that blocks are constantly falling off the tower. It seemed like after every couple turns, one or more blocks would fall off a different part of the tower. This was usually caused by a player that is not great at dexterity games but it still happened quite a bit with players that are usually pretty good at dexterity games. The reason that it seems to keep happening is that the hooks don’t fit well into the holes and thus can slide out easily. This is why when any player even slightly moves the tower it knocks off blocks.

The good news is that the game doesn’t end when someone knocks blocks off the tower or else the game would end almost immediately. The problem though is that you might end up spending more time putting blocks back onto the tower than you do initially placing them. Later in the game you could easily knock over four or five blocks which means that you have to put all of them back on the tower. This can cause even more blocks to be knocked off and it can become a never ending cycle. This hurts the game’s pacing as you are regularly waiting for the blocks to get put back on the tower so the next player can take their turn.

While Jenga Max tries to do some new things, it really doesn’t distinguish itself much from normal Jenga. While it is nice that there are more options as far as placement, the game still mostly plays like every other dexterity game. Add in the fact that blocks regularly fall off the tower and that it is actually hard to knock down the tower and Jenga Max is not better than any other dexterity game.