From 1987 to 1995 one of the more popular comedies on television was Full House. Being a popular TV show it should come as no surprise when the merchandising opportunities came which lead to the Full House Board Game. So how do you turn a family comedy into a board game? All you have to do is take an extremely bland roll and move game, paste on the Full House theme and you get a very dull board game.

Separate the cards based on the backs of the cards, shuffle each group of cards, and place them onto the corresponding section of the gameboard. Each player chooses a car playing piece and places it on the start space. Each player rolls the die with the highest roll getting to go first.

On a player’s turn they roll the die and move their playing piece the corresponding number of spaces. Players can choose to go whichever direction they want on the gameboard. When a player lands on a neighborhood (does not need to be by exact count) they draw the top card from the corresponding deck. 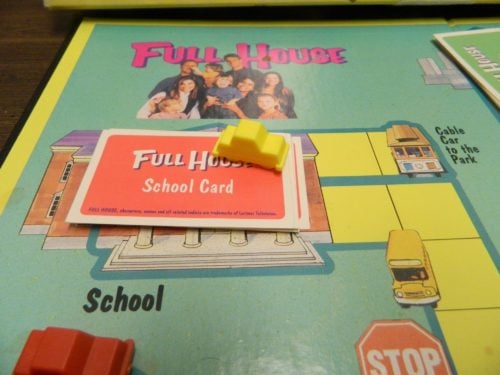 The yellow player has landed on the school and gets to take the top school card.

If a player draws a card that has a picture of one of the family members from Full House, the player puts it face down in front of them. If the player already has family member cards they must check them and if the card that was just drawn is a duplicate it is returned to the deck and the player’s turn ends.

If a player wants to use the taxi or the cable car (teleports players to a specific spot on the board), the player has to land on the space by exact count.

When a player lands on a “Tell a Joey Joke” space, they pick up the top card and read the joke on the card. As a consolation for reading a terrible joke, the player gets to take another turn. 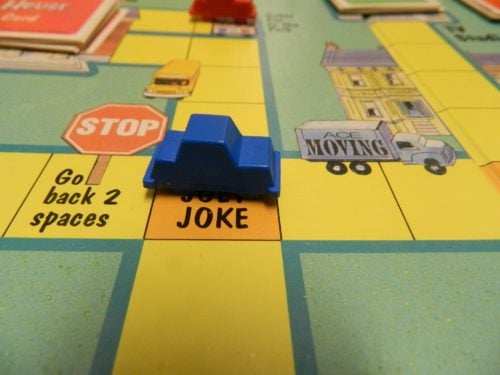 The blue player has landed on a “Tell a Joey Joke” space. The player will read the top joke card and will get another turn.

If a player lands on the “No Left Turn” space the player cannot go left on their next turn.

The yellow player has won the game because they have reached the house and they have all six of the family member cards.

Basically the Full House Board Game is what would happen if you took one of the most boring roll and move games and slapped a television license on it. All you do in the game is roll the die and move around the board. Occasionally you will draw a card which will either tell you what to do or will be one of the cards that you need to win the game. The game is easy to play but that is only because there are really no decisions to make in the game and the decisions you do have to make are generally really obvious. If you roll a number high enough to get to a neighborhood, you move to that neighborhood. Otherwise you try to land on a Joey Joke space (despite how painful that might be) to get another turn. That is basically all there is to the decision making in the game. The only potential strategy in the entire game is to avoid going to neighborhoods that the other players have taken a lot photo cards from since that reduces your chance of getting a photo card from that location.

Since the game has little to no strategy or decision making, the game relies almost entirely on luck. Basically to win the game you need to roll and draw well. If you roll well you can move around the board quicker and draw more cards. The key to the game is to draw well though. You could travel to a ton of neighborhoods and keep drawing cards that don’t help you. Basically whoever rolls well enough to get to a bunch of neighborhoods and then draws well will win the game.

One thing I have to bring up about the game is the Joey Joke cards. They somehow are both the best and worst part of the game. The word “joke” on the cards is a very generous term in my opinion. Between all of the Joey Joke cards (we ended up going through all of them in one game), I only laughed at one of them and I found a couple slightly funny in a this joke is so bad that it is slightly funny. I don’t know if this is because Joey told a bunch of terrible jokes on the show but some of these jokes are so bad that I don’t think I would even classify them as jokes. If you can’t stand corny/pun laden jokes, these jokes will drive you nuts. To illustrate how bad the jokes are I am going to share with you the best joke in the entire game.

I’ve got a real dumb uncle. The power went out in the mall and he was stuck for an hour on the escalator.

So most of the joke cards are terrible and yet for some reason I felt compelled to hear all of them. I don’t know what that says about me. There is also the benefit of a free turn to the player that reads the joke. At times I would question whether it is worth it based on some of the jokes. You don’t have to worry about missing any of the jokes since the game seems to be actively encouraging you to land on the spaces.

As far as the components are concerned, they are far from special. Basically you have the board, some cards and some plastic car playing pieces. Fans of the show might appreciate the game’s artwork but it is nothing special. One of the problems with the cards is that there just aren’t many cards. Each location only has ten cards which basically includes picture cards, go back to start, go back a couple spaces, go to another location, or go to a Joey Joke space to tell a terrible joke. You likely will go through most of the cards after playing just one game.

So I haven’t been particularly kind to the Full House Board Game. It deserves the criticism but as I mentioned earlier I have never actually seen the television show. While watching the show would not come close to fixing the problems with the game, this is the type of game that would benefit from nostalgia for the show. If you have fond memories of the show you may be able to get something out of the board game.

I wasn’t expecting a lot from the Full House Board Game and I was not disappointed. While the game is fully functional, it is just so boring. You roll and draw cards and that is all there is to the game. There are few decisions to make and the decisions you do make are usually really obvious. This means that the entire game relies on luck. It is not a good sign that the best and worst part of the game are the terrible joke cards that will make you groan more than they will make you laugh.

If you are not a big fan of the Full House TV show, there is no reason to buy the Full House Board Game. If you really like the TV show there may be some redeeming qualities for the board game but I still wouldn’t recommend picking it up unless you can get a really good deal on it.