How to Play Incan Gold

“Incan Gold” is a press-your-luck type temple exploration game where you compete against 2-7 other players to gather as much treasure as you can and get out safely before disaster strikes and you lose everything. There are five temples to raid (five rounds) and the player with the most treasure at the end wins. Each round consists of a variable amount of turns. Before each turn, all players in the game must decide whether they want to continue on and try for more treasure or leave and secure what they have acquired thus far. 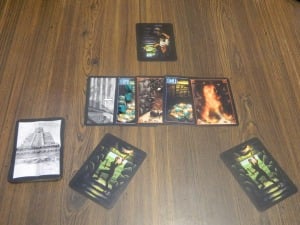 A sample round. The two players on the bottom are continuing on while the one at the top has elected to bank their treasure and leave the round. The player that left will get the three turquoise gems you see on the 17-treasure card in addition to what they had already claimed. The other two players are hoping not to get another spider or fire hazard card or they will lose everything.

After everybody has picked, the top card in a deck of quest cards is dealt and it will do one of two things. If it is a treasure card, everybody still in the round splits the number of treasure listed on the card (if it can’t be evenly split, the remainder is left on the treasure card for a mechanic I’ll get to later). If it is a hazard card, this will put everybody in more danger. There are five different types of hazards: snakes (why’d it have to be snakes?), spiders, a fire trap, a cave-in, and some sort of mummified little person (I have no idea what it’s supposed to represent). One of each hazard is fine, nothing will happen to your adventurers and the round continues. When the second (of three total cards for each hazard) comes up, the round is over and anyone still in the temple loses all their treasure they acquired during the round. Anyone who got out before disaster struck keeps what they got during the round (though obviously they aren’t entitled to a share of any additional treasure cards pulled after they left the temple). There are 30 total quest cards to start, 15 treasures and 15 hazards (five different types, three cards each). However, whenever a round ends via a second hazard card one of the hazard cards of that type is removed from play (so only two cards of that hazard will be in the deck for future rounds). After the five rounds are over, players total up their treasure and the player with the most wins. The main objective with “Incan Gold” is to press your luck to get as much treasure as you can but weigh the odds to make sure you get out of the temple before you lose everything. 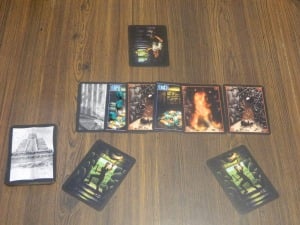 The two players who elected to continue have been hit by a second spider hazard card. This ends the round and the two players still in lose all treasure they acquired during this round. They pressed their luck too far.

Press-your-luck games are usually quite straightforward with an emphasis on luck over strategy. However, “Incan Gold” offers players a lot of interesting dynamics and mechanics which may force you to stay in the temple longer than you want or tempt you to leave earlier than you expected. There are even situations where it might be impossible to lose everything (no hazard cards have been drawn yet) but the rewards for bailing early might actually be worth it. As I mentioned before, excess treasure that can’t be split evenly is put on the card instead of discarded. When adventurers leave the temple, they are eligible to collect this excess treasure. If just one player leaves, they get all of it. If you have multiple treasures that weren’t able to be split equally this can really add up and even dwarf the amount you actually received from treasure cards. If more than one player leaves, they split the amount evenly. There are also five artifact cards (one is put into the deck of quest cards each round). These cards don’t award any treasure right away but if just one player decides to leave the next round (or any round afterwards), they get the card (or cards, it’s possible to have more than one artifact show up in one round) and earn five treasure. If three treasures have left the temple, the other two are then worth ten points. If more than one player attempts to obtain the artifact card by leaving the temple on the same turn, neither gets it and it remains in play for the other players in the next turn.

All of these dynamics and mechanics mean that you have to try to read your opponents like it’s a poker game to guess what they are going to do. If the treasure available for leaving the temple is tempting, many players are going to consider leaving. If several players leave at the same time, the reward isn’t going to be so hot when split three or four ways and it’s possible just one player will be left in the temple and allowed to collect everything (and thus get a huge lead as long as they leave before a second hazard card hits). If you know all your opponents are way too conservative, you might be better off going for broke. You could possibly earn enough treasure in one gutsy round of play (and lose everything every other round) and still beat all the conservative players when the game ends. Otherwise, if you have a lot of big risk takers at the table, you might be better off collecting the excess treasure and leaving each temple early.

My Thoughts on Incan Gold

“Incan Gold” is a simple but solid “appetizer” game that can be completed in 15-20 minutes and is perfect to play before or after your main game of the night. There is a ton of luck involved but also some strategy as I noted earlier. I do kind of wish a few more mechanics would have been added. For example, even though it might be frustrating beyond belief, an instant-death card probably should have been added. It would have added a lot more vulnerability to the game instead of always being safe until the second hazard card is drawn. They could have also added character cards of some sort. For example, they could have made an Indiana Jones-like character that is automatically eliminated from a round if a snake hazard card is drawn but is safer than the average adventurer when a trap hazard card is drawn. Another possible character could get a larger share of the treasure but is much more vulnerable to hazard cards. “Incan Gold” is still a good game but a little more complexity might have helped.

The game’s production quality is pretty good. The art and construction of the components are both good and the rulebook is extremely well-written and an easy read. While most games take a long time to learn the rules, you can read this rulebook and understand everything in five minutes or less. The box is nice and small, which is a good thing for gamers like me who have a large collection and not even close to enough room to house said collection. I wouldn’t consider the card art to be amazing but it’s perfectly fine.

Should You Buy Incan Gold?

“Incan Gold” isn’t really for hardcore gamers who prefer highly-strategic games over games with both skill and luck. However, it is a nice simple family game that everybody should be able to easily understand. I enjoyed the game and will keep it in my collection but I will say that’s it kind of middle-of-the-road for an Alan R. Moon and Bruno Faidutti game.

[…] games and other similar card games out there. In fact, the critically acclaimed Incan Gold, which I reviewed about a year ago is very similar to it. There are some minor differences and Pack It adds some protections (as well […]