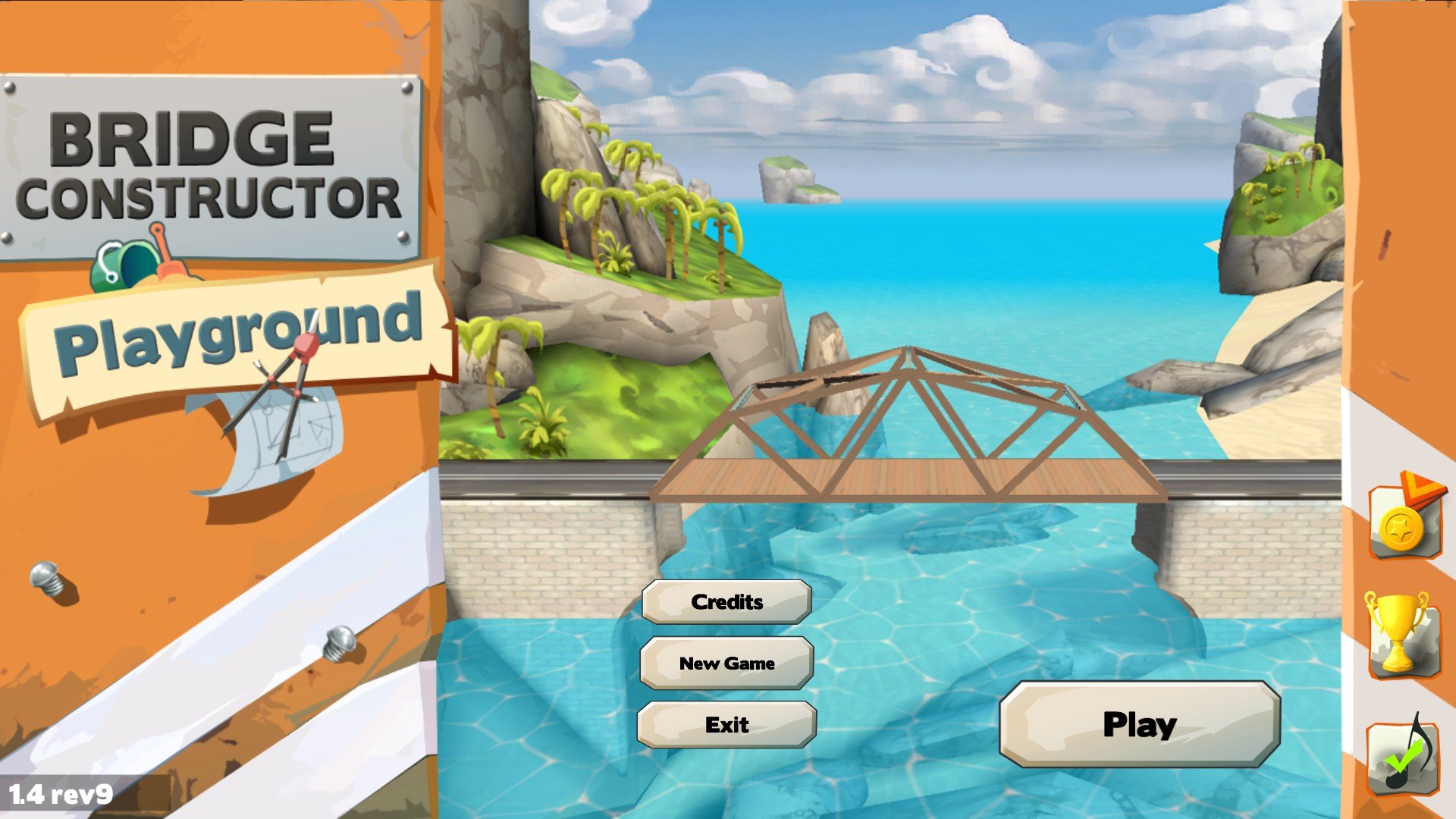 In Bridge Constructor Playground, you are tasked with creating bridges in 32 different levels. To build the bridges you are given four materials (wood, steel, cables, and concrete). Each level has five challenges which are as follows:

In order to progress through the game you do not have to complete all of the challenges but you need to accumulate enough medals to proceed to the next “world”.

The game was first built for mobile and you can tell. Bridge Constructor Playground is not an accurate bridge construction simulator. It is a casual game that doesn’t have a lot of depth of it. You place materials and then send cars and trucks across your bridge to see if your bridge can stay together. If the bridge falls apart you return to the construction screen and continue tinkering with the bridge until the cars/trucks are able to safely cross the bridge.

In my opinion Bridge Constructor Playground has decent gameplay but it is nothing special. I had some fun playing the game at first. It is not a deep experience but works as a pick up and play game. The game is best if you play it in short bursts. It is not the type of game that you will play for hours at a time. If you like casual game (typical of what you would find in a mobile game) you should get some enjoyment out of the game.

Overall I would consider Bridge Constructor Playground to be an easy to moderately difficult game. It is very easy to build bridges that will just support cars and trucks. The challenges requiring using certain materials are also not that hard. The “budget” bridge and safety bridge challenges are actually harder than you would expect. They are from from impossible but you will need to take some time tinkering in order to be able to successfully complete them. I actually didn’t complete all of these challenges since they just weren’t worth the effort in my opinion.

Being a mobile port you can expect the graphics to not be world shattering. I would consider the graphics to be below average. The graphics are not so terrible that you can’t live with them but I wouldn’t call them a great selling point either. Played on a phone the graphics probably are pretty good. Playing the game on a larger screen than a phone though shows that the graphic quality is lacking in some areas.

For the retail price of $9.99 on Steam, Bridge Constructor Playground is a terrible value. I got around four hours out of the game but I didn’t complete all of the challenges. I would guess that the game would take around six to eight hours if you wanted to complete all of the challenges. The length itself is not that bad but the game is not polished enough to be a $10 game. I acquired Bridge Constructor Playground through Humble Bundle (it is part of the $1 tier for the PC and Android 11 bundle that runs through October 7th, 2014). For the price I paid ($1 with an additional 3 games), Bridge Constructor Playground was worth what I paid. If you are not able to get it through the Humble Bundle though, I would only recommend the game if you find the game at a deep discount.