Each round begins with the players stacking the bricks in order to form a wall. The bricks can be stacked in any way as long as all of the bricks’ open ends are facing downward. The wall can be as wide or tall as the players choose. When the wall has been built, Humpty Dumpty is placed on the top.

Players take turns removing one block at a time from the wall. Once a player touches a block, they must remove that block from the tower no matter how stuck the block is. If a player successfully removes a block, it becomes the next player’s turn. 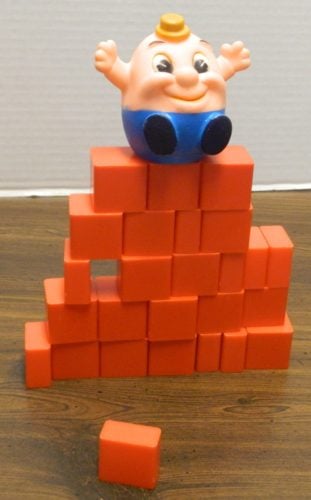 The current player has successfully removed a block from the wall. Play passes to the next player.

If a player pulls out a block and it makes Humpty Dumpty fall off the wall, that player is eliminated from the game. 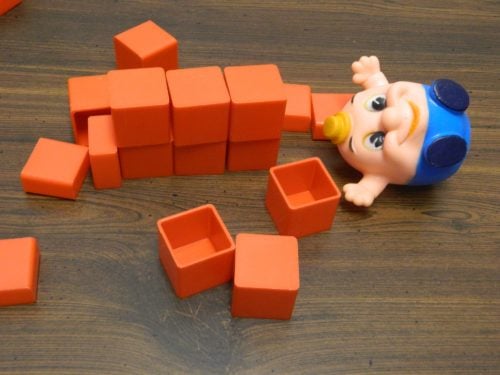 The current player removed a block which made the wall fall and knocked over Humpty Dumpty. This player is eliminated from the game.

The remaining players rebuild the wall and a new round begins. The game continues until all but one of the players have been eliminated from the game. The last remaining player wins the game.

The best way to describe Humpty Dumpty is “My First Jenga”. The Humpty Dumpty game was actually made before Jenga so that may not be the most accurate description but I am going to stick with it anyway. Humpty Dumpty is essentially Jenga for small children. Instead of building a tower you build a wall which is Humpty Dumpty’s fatal flaw.

If you play the game how it was meant to be played, the game is way too easy. Being made for three to ten year olds was a good giveaway that the game was going to be easy. Due to the simplicity I personally would say the game is more for 3-7 year olds since the game will become boring quickly for older kids.

The reason the game is so easy is that it is so obvious which block should be taken at any given time. Jenga must have learned something from the Humpty Dumpty game because the creators of Jenga realized that the stacking mechanic works much better when the blocks are placed vertically instead of horizontally. The main problem with how the walls are built is that so few of the blocks actually matter in the game. If you end up using all of the blocks to build the wall, you will spend at least your first five turns taking blocks that obviously won’t impact the rest of the wall. Everyone just grabs the top block from the sides of the wall that don’t support any other blocks. This continues until the wall becomes more of a tower with just the blocks underneath Humpty Dumpty still in place. Outside of really small children it should be obvious what block you should take on your turn.

After playing one quick round and finding the fatal flaw with the Humpty Dumpty game, I decided to try and spice up the game by using more of a tower approach than a wall approach. I call it hardcore Humpty Dumpty where we made a tower with two blocks in each level. The first couple of turns were somewhat easy as the players just took the blocks on the sides of the tower that weren’t directly under Humpty Dumpty. When it got down to just the blocks under Humpty Dumpty though the game becomes really challenging. When it gets to this stage every single block is required to keep the structure up so the next player will get eliminated no matter what they do.

This is a potential problem with every stacking game since every game will reach the tipping point where it is impossible to not knock over the tower. This tipping point is rarely reached in other stacking games though since players will make a mistake and knock over the tower before this point is reached. Since Humpty Dumpty is so easy though, you will reach this point in almost every game so turn order pretty much determines who ends up getting eliminated each round.

It is interesting that Humpty Dumpty allows the players to build the wall however they like but I don’t know if it is such a great idea. While it adds flexibility to the game, being able to build your own wall has a problem where you will either make the game too easy or too hard. Build the wall too wide and the game becomes way too easy but build it too high and you will quickly encounter a situation where it is impossible to safely remove another block.

It is kind of unfair to be so harsh on a game that was obviously meant for young children. For its’ target audience I think Humpty Dumpty could be a fun game. The game is so simple and kind of cute that I think very young children will enjoy it. I honestly wouldn’t recommend the game to anyone over age six or seven though because it is way too easy.

I actually think the best thing about Humpty Dumpty are the components. The Humpty Dumpty figure is both cute and kind of creepy at the same time. The blocks/bricks are bland but are durable since despite being 40+ years old the bricks in the game I purchased were still in pretty good condition. The game has way too many bricks though since if you use them all you will just make the game longer for no real reason. If you like older children’s games, there is a charm to Humpty Dumpty that could appeal to collectors.

The Humpty Dumpty game is not a good game for anyone other than really small children. The game is just way too easy with there being so many free turns where it is obvious which brick you should take next. This will still be enjoyable for really young children but will quickly become boring for older children and adults. The problem is that if you try to make the game more difficult by building a large tower the game becomes too hard and you get into situations where it is impossible to remove a brick without knocking down the tower. Unless you have small children there is really no reason buy the Humpty Dumpty game unless you are a board game collector.

If you would like to purchase the Humpty Dumpty game though, you can find the game on eBay

My grandma gave me the game. It was my dads so my 3 year old could play. Yes it’s either way to hard or Easy. And he hates the humpty lol. I guess he is a little creepy. Must be old. My dad pointed out the kid on the box is wearing a turtle neck ha