Setup the board so every player sits at one of the corners of the board. Each player chooses a color and takes all of the pieces and scoring peg of that color. Everyone puts their scoring peg in the zero space on their scoring track. The youngest player starts the game.

The first player has to play one of their pieces so at least part of it is inside the center star or circle. Pieces can only be played where they fit/snap into the board. After the first player has played a piece, play passes to the player on the left. All future pieces need to touch the previous piece that was played. The next piece can either touch a side or a corner of the piece that was just played.

Normally players only play one piece on their turn but players can earn a bonus turn in three situations:

With the bonus turn the player immediately gets to play a piece anywhere on the board that touches one of the pieces on the board.

When one of the circles or stars on the board are completed, scoring is completed. The player that controls the most segments of the circle or star gets ten points. 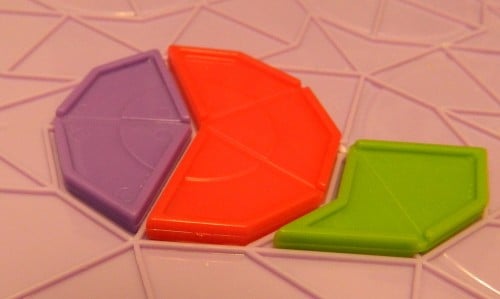 If two players tie for the most segments of a shape, neither player scores the points. The player that played the piece that completed the shape gets five points no matter how much of the shape that they control. 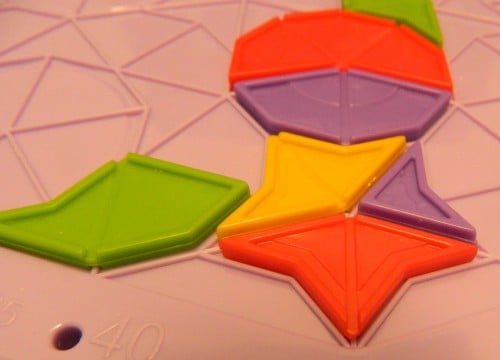 The purple player played the last section of the star. Since red and yellow control the same number of sections in the star, neither score any points. The purple player would score five points.

If a player has the most segments of the shape (scoring the ten points), they can’t also get the five points for completing the shape even if they are the player that completes the shape.

A player has to play a piece on their turn unless they are unable to play any of their remaining pieces in the spaces next to the last played piece. If all of the players have to pass at the same time, the game ends. The game also ends when one player scores 40 or more points or one player plays their last piece. If someone plays their last piece, they get a bonus of 10 points.

If someone reached 40 points to end the game, that player wins the game. If the game ended for one of the other reasons, the player with the most points wins the game. 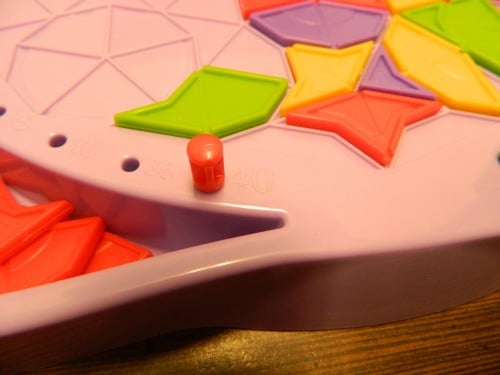 The red player has reached 40 points and automatically wins the game.

An optional rule for the game is to give 15 points to the player who has the most segments inside the center ring when it is completed.

If you have ever played the game Blokus, CirKis might look quite familiar. The games do share quite a bit in common (including the same publisher) since both are abstract tile laying games. Even though the games share some things in common, they seem to play pretty differently. Blokus seems to focus more on strategically playing tiles in order to play as many of your tiles as possible to the board. CirKis focuses more on playing your pieces in scoring zones. In Blokus every tile placement seems important while in CirKis a player could regularly be forced into playing tiles that don’t help them at all and could in fact help the other players. Even though I have never played Blokus I think it is probably a better game than CirKis.

CirKis is not a bad game though. The game has some interesting mechanics which can lead to some interesting strategies. Early in the game you have a lot of opportunities to choose which tile you want to play which can direct the path of tiles in any direction. The strategy of CirKis is to get the other players to get you into position to either score a shape by controlling the majority of the shape or score points by finishing the shape.

There is a lot to think about while playing CirKis. While it is easy to prevent players from scoring points, it is easier than you would think to make a mistake and give points to the other players. There is a strategy to giving other players points though. Since the player that completes the shape and the player that controls the majority of the shape both get points there is a reason for players to work together. While one player will get more points than the other, there is motivation for a player to take less points since they will gain points on the other player(s).

Scoring for the stars is interesting since it is really hard to get a majority of a star since you need to play at least twice pieces on the star in order to control a majority of the spaces. Many of the stars end up in ties which gives only points to the player who completed the star. For the stars you are probably better off just waiting until the star is almost completed and then playing the last piece and getting five points.

One of the most best parts of CirKis is that the game seems to keep all of the players close. CirKis has some pretty big momentum swings which usually keeps all of the players in the game until the very end. In my most recent game every player was within 10 or so points from winning when one player eventually won the game. This means that any player could have won at the end of the game.

The reason the momentum swings occur is that once a player starts getting a big lead, no other players will work with that player to help them score points because they have to prevent that player getting 40 points and winning the game. Players that fall behind early benefit from this because all of the other players are willing to give them points (if they get points themselves) since they are already ahead of them so they get closer to winning while still staying ahead of the other player.

The biggest problem with CirKis is the fact that no individual player has much control in the game. At least in the four player game there isn’t much opportunity to strategize since you have no idea what direction the tiles will end up going. Since you have to play based on the most recent tile played, you can’t really form a strategy. Players probably have more control in the two and three player games but in the four player game you usually have to rely on luck or one of the other players making a mistake in order to win the game.

This lack of control makes strategies pretty pointless. Your strategies will rarely ever work since the other players will actively work against them unless they benefit from it or a player makes a mistake. If all of the players are of an equal ability this will likely lead to stalemates until players start running out of pieces. If one player does make mistakes though they will likely hand victory to the player who plays after them since they can then take advantage of the mistake.

Overall the components for CirKis are solid. The pieces are made of pretty thick plastic and do a good job “snapping” into place so you can verify that you properly played the piece.

CirKis is not a terrible game but it is also not a great game. You can have some fun with the game and the game has some interesting ideas. What keeps CirKis from being a good game though is the fact that you have so little control over what happens in the game. The only times you ever have any real control over the game is when another player makes a mistake or you get lucky and a player runs out of the pieces they need to prevent you from scoring the winning points.

If you already own a game like Blokus I would probably recommend just sticking with it and not wasting your time with CirKis. If you hate abstract and tile laying games you probably won’t like CirKis either. If you like abstract and tile placement games though and can find CirKis for cheap it could be worth picking up since you can have some fun with the game. If you would like to purchase CirKis you can purchase it on Amazon here