Having some programming experience, I have been looking for a good “programming” game for quite some time. The concept of programming video games has started to become pretty popular with quite a few games being released recently that have tried to capitalize on it. The premise has so much promise for a puzzle game. While games like Hack ‘n’ Slash had potential, I have yet to find a game that totally lives up to the potential.

Human Resource Machine is a new indie puzzle game (released today) made by Tomorrow Corporation. If that name sounds familiar it should since it is the same company that made both World of Goo and Little Inferno. With two critically acclaimed games under their belt, which I enjoyed quite a bit, I was excited to see what they would do for a programming puzzle game. Well I wasn’t disappointed. Human Resource Machine is the best “programming” game that I have played and is one of the best puzzle games that I have played in quite some time.

What Is Human Resource Machine?

The basic premise in Human Resource Machine is that you play as a new employee at a corporation. In this corporation you are tasked with doing some pretty mundane tasks. For example your first task is to take items from the input area and bring them to the output area. A lot of the levels involve performing some basic and not so basic mathematical functions as well as sorting. Seems easy doesn’t it. The corporation you work for appreciates efficiency though so you need to “program” your little worker to perform the tasks in a repeatable method that is also efficient.

Here is where the programming comes into play. You will use the game’s method of programming to tell your little worker what to do. Throughout the game you will unlock eleven different commands that you can give your little worker. These commands take the place of code that you would write in traditional programming. In Human Resource Machine you don’t have to type any code (you actually can’t type any code) since the game utilizes a drag and drop interface using these commands which forms “code” that actually looks quite a bit like code. 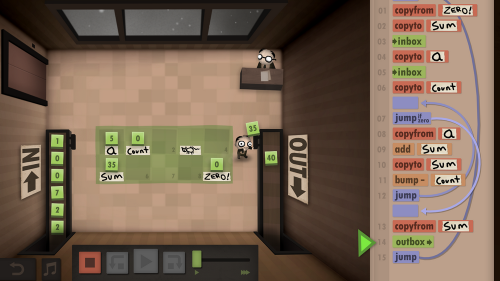 Since I have some experience with programming I will mostly be talking from that point of view but I will also try to address people who little to no programming experience.

I have to give the game a lot of credit for doing a good job simulating coding without forcing you to actually code anything. If you thought you could immediately start coding outside of the game once you finish Human Resource Machine, you won’t be able to. The game mostly uses pseudocode and focuses more on programming concepts than actual programming. Essentially the building you work in acts like the computer itself and you need to direct the computer on what it is supposed to do to complete a simple task. Instead of getting really technical the game uses simple concepts to represent different parts of programming. For example the game uses conveyor belts for inputs and outputs, spots on the floor are used for memory allocation, and your character manually adds and subtracts and moves information around the building. While this might be frustrating to people that just want to learn how to code, the game can give you a good base to start learning programming since it does a good job teaching some of the fundamentals of coding and gets you to start thinking like a programmer.

I think the early levels could be manageable for everyone including people without programming experience. These levels will be pretty easy for players with programming experience. These players may want to try some of the optimization challenges which add additional challenges that require you to either use less commands or perform the work more efficiently. These challenges are a good addition since they add challenge to levels that otherwise would have been really easy.

After some introductory levels, the game’s difficulty ramps up. The challenge comes from thinking like a programmer instead of a bunch of complicated concepts. This is where people without programming experience might encounter some issues. To solve these puzzles you need to think like a programmer. Some examples include creating a division program without actually having access to division, and sorting letters and numbers without a sort function. You need to think through the problem and try to find a workaround solution that would work. What is really ingenious about these puzzles is that they actually indirectly teach you how to think like a programmer and show you ways to make the basic functions that you normally use in programming without even thinking about them.

For the most part the game didn’t really challenge me until around level 30. The last ten or so levels are sometimes complicated and you need to create a plan or you are going to end up wasting a bunch of time. The puzzles are solvable if you take the time to think through what you need to do in order to solve the problem. Novice programmers may need to get some hints from online  in order to guide them in the right direction.

Here are some other quick thoughts

With the game retailing at $10, if the game’s concept interests you I think you will definitely get your money’s worth out of the game. The game has forty one different levels/puzzles. I have finished all but level forty and have played the game for eight to nine hours. Overall I think the game would take around ten hours to complete. With more programming experience it should take less time and with less programming experience it should take a while longer.

While I had high expectations for Human Resource Machine, the game may have found a way to surpass them. As I already said Human Resource Machine is the best video game that I have played that involves a programming mechanic. The game is really fun to play and actually could teach you some things about thinking like a programmer. The puzzles are really well designed and while they can become challenging, you feel proud of yourself when you find the solution.

I could only find two small problems with the game. First I am a little leery about how hard the game is going to be for people without programming experience. The game is the right difficulty for people with experience but it might be a little too challenging/frustrating for people without. If you don’t have experience “thinking like a programmer”, you might have trouble thinking in the way that you have to in order to solve the puzzles. If you are willing to look for help online though and learn something new about programming, I think the game can still be manageable. The other issue is a little selfish since I just wish the game was longer since I enjoyed it so much.

While I loved the game, Human Resource Machine will not be for everyone. If you have no interest in learning how to program or you generally hate puzzle games, it probably won’t be for you. If you want to start learning to program or already know how to and really like puzzle games, I think you will really enjoy the game. I know it is one of the best puzzle games that I have played in a while.

Complete History of Board Games: Flipsiders