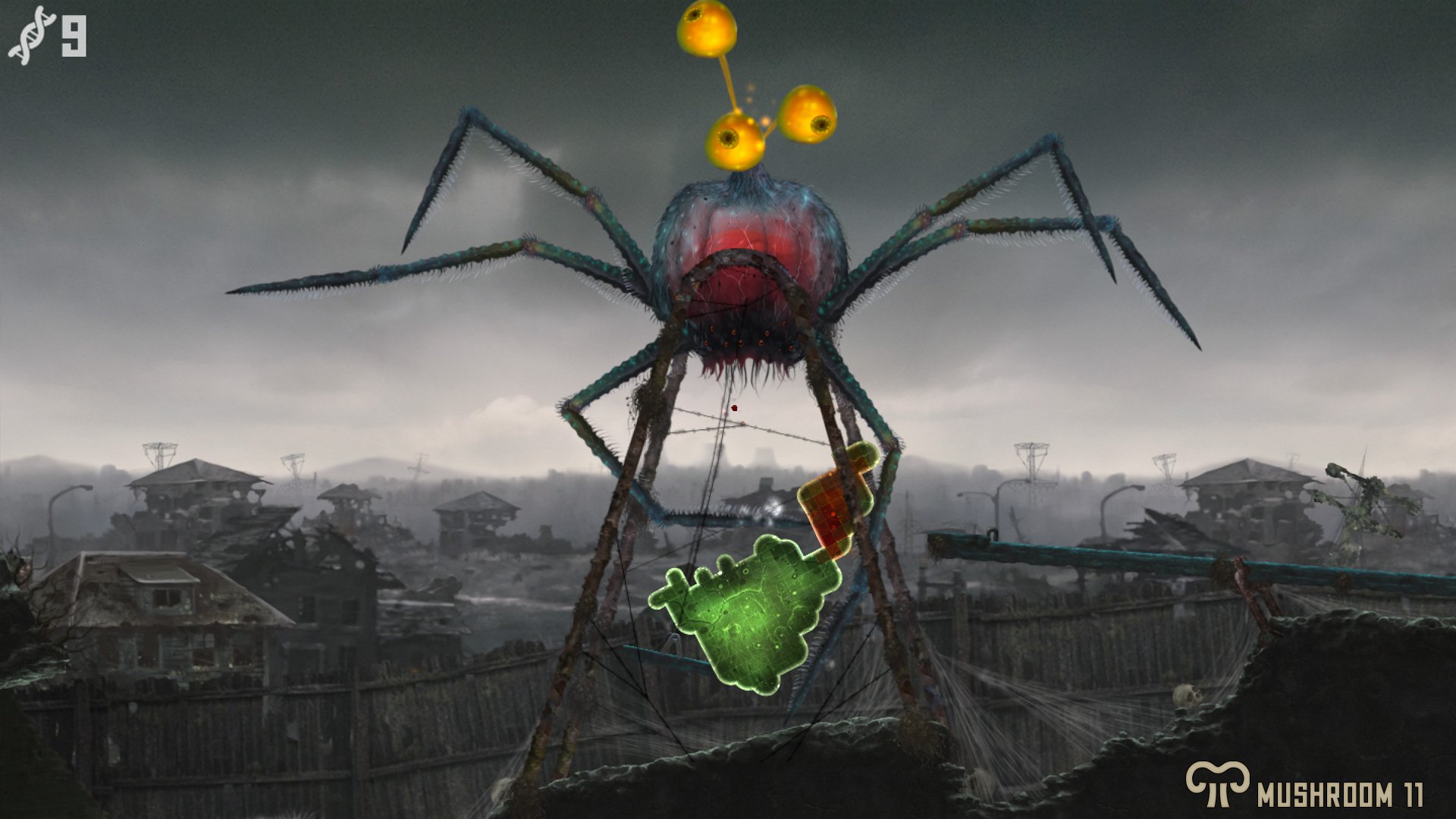 In Mushroom 11 you play as a weird creature/organism that has amazing regenerative abilities. The organism almost instantly regrows it own cells when they are damaged or “erased”. The objective of the game is to traverse the game world to discover what happened to the wasteland that your creature is currently stuck in.

As I have already alluded to, Mushroom 11 has to be one of the most original games that I have played in a while. I have played a lot of puzzle platformers and I can’t remember a single game that played like Mushroom 11. Being original doesn’t always make a game good but in the case of Mushroom 11 it does.

It is kind of hard to explain what it is like playing Mushroom 11. While I would classify it as a puzzle platformer, it really isn’t a traditional platformer. There is no jumping in the game and the only way you move is by erasing part of the creature and using the new material that was grown to move forward. This movement mechanic is unique and is a lot of fun. I would say that the game is more of a puzzle game than a platformer since most of the gameplay involves figuring out how to shape the creature to solve the puzzle or reach the next area.

The best part of this unique mechanic is that the designers did a great job using it to create interesting puzzles and levels. When designing the puzzles the designers must have really thought of how to best use the mechanic. A lot of games take a unique mechanic and try to cram it into exiting puzzle designs. The puzzles in Mushroom 11 seemed to have designed from the ground up around the unique creature mechanic. While it isn’t that hard to figure out how you need to solve the puzzles, the execution is what is most interesting about the puzzles.

This puzzle design is showcased in the “boss” fights at the end of each level. In most of these boss fights it would be really hard to actually die but they are still challenging because you need to think outside the box for the solution. For example in one of the fights the boss shoots projectiles at you. The only way to kill the monster is to deflect/redirect the projectiles back at the creature. For some of the projectiles you have to turn your creature into a ramp so the projectile can roll along the ramp and get launched into the air hitting the monster. Having to use the creature in unique ways like this is why Mushroom 11 is a good/great game.

While the story is more of a thing you just encounter through the environment as you traverse it, the game does a good job creating an interesting atmosphere. If you don’t pay attention to the background you might not even think that there is a story to the game. If you take the time to admire the game world though, you can clue into a lot of things that happened in this world. Looking at the background is no chore anyway since the art style is really well done. The music is also nice and does a good job setting the mood.

There is so much that I loved about Mushroom 11 that it is disappointing that the controls sometimes keep the game from being great. The controls are really easy to use and for the most part work really well. You can cruise through large sections of most levels without any issues. Occasionally you will run into a situation where the creature works against you. Usually the game does a good job of placing the new material in a spot on your creature that you want. In some areas though the game keeps putting the new material in areas that you don’t want. This means that you have to waste quite a bit of time erasing the same spots over and over until the game decides to place the new material in the right spot. After a while this gets a little frustrating since I wasted quite a bit of time when these issues arose. I can’t blame the developers though since it usually works really well and there is no way that the game could always pick the spot that you wanted the material to go to.

Mushroom 11 has seven different levels/worlds. While that doesn’t sound like a lot, the game is longer than it appears. This is because while there are only seven levels, you could spend 30-60 minutes on each level. While part of this is due to some areas of the game taking too long due to the creature not cooperating, the levels are still pretty long. At this stage I have completed four of the seven levels (I definitely plan on finishing the game) and I have played the game for around three hours. Unless the difficulty increases significantly I would expect the game to be around six to seven hours long.

Other than speed running and/or gathering all of the DNA (collectibles) in each level, there is probably not going to be a lot of replay value in the game. The levels and puzzles are well designed but I don’t really see myself replaying the levels a second time. At $14.99 the cost per hour of gameplay is not too bad. While I wish the game was a little longer if the concept interests you I think you can get your money’s worth out of the game.

Should You Purchase Mushroom 11?

Mushroom 11 is an interesting original idea for a puzzle platformer. The game has great level/puzzle design and is a unique experience that you have probably never played before. I wish the creature controlled a little better and I wish the game was a little longer but I had a lot of fun with Mushroom 11.