What Is Paint It Back?: 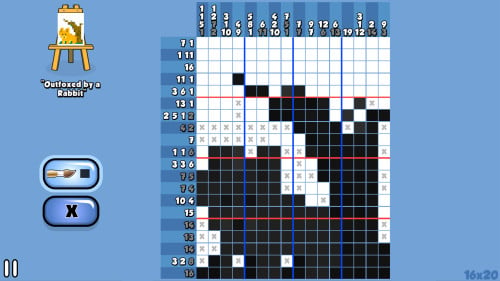 Paint It Back is a casual puzzle game with a painting theme, but it requires no actual artistic talent to play the game or succeed in it. The game is effectively a series of nonogram puzzles (also called hanjie puzzles, picross puzzles, or griddlers) where you “paint” various pixel art paintings by solving the puzzles. Nonogram puzzles like the ones in Paint It Back give you a grid and each column and row has one or more numbers telling you how many cells you will need to fill in to complete the puzzle. Sometimes you will know exactly what a row or column should look like (which cells you should fill in) but most of the time you will have to use logic (using information from other columns and rows and your own intuition) to successfully figure out whether or not to fill in each cell. If you know a cell isn’t supposed to be filled in, you can right click to place an X so you know to never paint it (this will also help give you information for other rows and columns as well).

While the first sets of levels are pretty easy and you will be pretty much given a lot of the rows and columns for free (and the grid is just a 5×5 or at worst a 10×10), eventually Paint It Back starts to become pretty challenging. The grids become much larger (a lot of times they will even be divided into different sections that you will do separately) and you will have to use logic to infer whether to fill in certain cells or not. For example, if the puzzle is a ten by ten grid and one of the rows calls for eight painted cells, you can safely fill in all but the first two cells and last two cells since the middle six will be used no matter what. However, unless another row or column helps you out, you probably won’t know whether the first two cells, the last two cells, or one from each side will make up the last two cells you need to color in (you will need to solve other rows and columns to get more information). While you can usually figure things out with a little thinking, there are certain occasions where you might have to make an educated guess but you can sometimes look at how the painting is developing to get some tips.

Paint It Back comes with 150 different paintings to solve, an endless Mystery Masterpiece challenge mode (where you can’t see what you are painting and are supposed to avoid making mistakes, move quickly, and use as few X’s as possible to gain awards), twenty achievements, and three different difficulties (all paintings can be painted in normal mode, most are available in a harder pro difficulty, and some can be painted in the very difficult master difficulty).

What I Liked About Paint It Back:

I have a confession to make, I am absolutely obsessed with Paint It Back. As a video game reviewer who likes to try lots of different games, I pretty much need to just play a game until I feel like I can make an accurate judgement about it and then move on to the next game as quickly as possible (since there are so many good games released each week that I would love to review). Well, Paint It Back really hurt my productivity this week since I have already played a whopping 17 hours of it and I’m only two-thirds done with the puzzles. It’s hard to explain why the game is so much fun but it is definitely one of the most addicting and fun games I’ve played in awhile. Paint It Back is absolutely one of those “one more turn” types of games that are hard to put down.

Paint It Back is a simple game to learn but eventually becomes pretty challenging unless you are a logical thinker. There are only two buttons in the entire game, the left mouse button paints (you don’t even have to pick a color) while right clicking places X’s on the canvas (so you know you can’t paint those cells). That’s it. Your grandma could probably learn how to play Paint It Back. The game starts off with several tutorial levels which teach you everything you need to know and when the time comes to do the levels yourself (without any help), the first few levels are extremely easy. Of course, things get harder and harder as you go on but the game’s difficulty is very fair throughout. Also, you can kind of decide for yourself how difficult you want the game to be. If you just want a simple game and don’t want to think too much, you could just paint everything in normal mode. If you want a slight challenge, you can paint most paintings in pro difficulty (where the grids sometimes go up to 20×20 adding some more difficulty). Finally, some paintings are available in the very difficult master difficulty (I’m a pretty logical person who is pretty good at puzzles and even I struggle on these ones).

Having great art is obviously a very important thing for a game with a painting theme. While some of the early paintings are just okay (they didn’t really have a lot of room to work with since many of them are 5×5 or just a little bit bigger), they start getting better and better as the levels go by. If you don’t like pixel art, you probably won’t be impressed with the paintings though. However, I like pixel art and thought most of the designers were above average, with some being really good. The rest of the game’s art (everything but the paintings) is pretty good though it looks very mobile game-like. As for the rest of the presentation, the music is pretty solid though it does start getting a bit repetitive once you’ve put in ten or more hours. However, you can easily mute the music once you get sick of it.

Except for a few additions I wish Paint It Back would have included (even though the game is a great deal which provides a lot of puzzles for a pretty low price), I can’t really think of anything negative to say about the game. There are two additions I wish the game would have made though. (as of October 18 the game now has a mark-up mode where you can test out possible moves without messing up the work you have already done). Second, the ability to create and share your own paintings/puzzles would be amazing because it would add even more content to the game. I hope if a sequel to Paint It Back is ever made, something like that is included. While both of these additions would have been nice, the lack of them isn’t going to hurt Paint It Back’s rating because it already offers more than enough content for its price.

Paint It Back is one of the best Steam games I’ve played in terms of bang for your buck. If you like puzzles (especially logical puzzles like Sudoku or nonograms), you will get so much entertainment out of this game. I have already put 17 hours into the game (I really got addicted to it) and I still have about 50 or 60 puzzles to go yet (so probably at least eight or nine more hours to complete it for a total of about 25 hours). This is also the type of game that I could easily see myself replaying, especially to finish all of the puzzles in the master difficulty. Paint It Back is a steal at $7.99, you will get about 25 hours of fun out of it as long as you like puzzle games.

It is really hard to explain why Paint It Back is such a fun and addicting game but it just is. If you love puzzle games like Sudoku or nonograms, you will get so much entertainment out of Paint It Back and it will easily be worth the full $7.99. While nonogram games aren’t a new thing (the Picross games are basically the same thing though they apparently don’t have as large of paintings as Paint It Back does), this is still a great game. I have had so much fun playing it and I have absolutely nothing negative to say about it. While my rating is only a four and a half out of five (since five stars are reserved for essential games that every single gamer will enjoy and puzzle games are a pretty niche genre), I personally (as a puzzle game fan) would definitely give it a five out of five.

[…] posted a review of Paint It Back yesterday so this will just be a very brief mini-review. As I wrote in my review, I am so addicted to this […]