The object of the game is to be the first player to reach 1,000 points or whatever point total is agreed upon by all of the players. To determine who gets to go first, all of the players roll the dice. Whoever rolls a “7” first, gets to start. 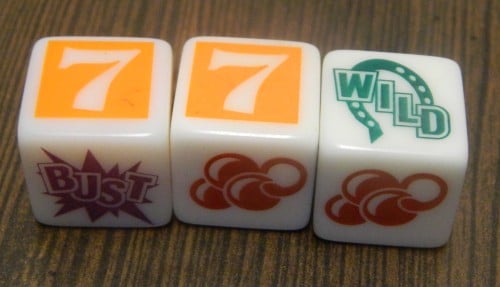 The player has rolled two 7s and a wild symbol. The wild symbol can be used as any symbol. In this case it would be best to be used as a 7 which will score the player 100 points.

Whenever the player’s turn is over (through rolling a bust or stopping), play passes to the next player in a clockwise fashion. The first player to reach the agreed upon point total wins the game.

Ever since there have been dice games, there have been “press your luck” games. In these press your luck dice games you decide how many times you want to roll the dice risking all of the points you have already earned that round if you should roll a bad combination. We at Geeky Hobbies have already taken a look at quite a few of these games which include Easy Come Easy Go, Scarney 3000, and Dungeon Dice. The games ranged from pretty average to terrible. Hot Slots is part of the later.

One and maybe the only positive for Hot Slots is that it is simple to play. The instructions are two pages long but you could probably explain the game with a couple sentences and the scoring chart. The game should take no longer than a minute to learn. Essentially you roll the dice, check for any bust symbols, check how many points you earned, and decide whether you want to roll again. The game has a recommended age of 8. The only explanation for that age recommendation is because association with gambling/slot machines. Children of almost any age could play this game since you only need to roll the dice and pick whether you want to press your luck.

Despite pretty much everyone being able to play the game, I don’t know why anyone would want to. Hot Slots is just a very boring game. The only decision you make in the game is whether you would like to press your luck. Even with that decision you have no insight to make a better decision so you are just making a guess. With no decision making there is no strategy. All of this makes it feel like your decisions have no real impact on the game and it just becomes a game of going through the motions.

I do have to give the game “credit” since it does a great job simulating a slot machine while finding a way to take out all of the fun. No matter how many times you roll, you will usually lose all of the points you have acquired. You have to either get lucky or you will have to decide quit right away banking few points or risking your points and likely losing them. Hot Slots can be summed up by taking an old slot machine (before there were bonus games and free spins) and stripping out all of the gambling/winning money.

Most of Hot Slots issues are made worse by the game taking too long to finish. The game only takes like 20 minutes, but it still takes way longer than a simple press your luck dice game should take. If you for some reason decide to play the game, I would highly recommend playing up to 500 points at max. Playing up to the recommended 1,000 points takes way too long. The main reason the game takes longer than it should is that you have to always reference the chart to determine how many points you won. The more you play the game, the faster it is to look up the combinations but it is still kind of a nuisance.

While I am not a big fan of press your luck dice games, I have played much better games than Hot Slots. Those games are better because they give you choices that actually seem to make a difference. In those games you can somewhat form a strategy and then make some calculated risks. In Hot Slots you just roll the dice until you either roll a bust or decide to quit.

The components are not terrible but they could have been better. The dice are not bad but I wish the symbols were engraved in the dice. The symbols are just painted on each side of the dice and since they aren’t engraved the paint will eventually start to fade off. Once the symbols have faded off there is no other way to tell what symbol was on each side of the dice. If the dice were engraved you could still tell what the symbol was due to the indentation. Other than the dice you only get some score sheets so there isn’t much else to the game.

Hot Slots is just not a good game. The game relies exclusively on luck and it feels like the few decisions you actually get to make have little impact on the game. The game feels more like a chore than an actual game. Unless you love slot machines and press your luck dice games, stay away from Hot Slots. If you love both though you could maybe get a little enjoyment out of the game but I wouldn’t pay much for it.

Uhhhh, bad article. Poorly written. Duh, make it a drinking game and it'll be a blast.

I have to disagree with your assessment of the game. While the game might be better while drinking I have played almost 40 different dice games (which are reviewed on this site) and there are much better dice games out there than Hot Slots.