The game begins with the dungeon pit being placed in the center of the gameboard. Each player picks a prisoner card and places it on the start space in front of them on the gameboard.

Each player’s turn begins with them rolling all six dice into the dungeon pit. All dice that match at least one other die are taken from the pit and are placed on top of the dungeon pits walls. At this point as long as the player has not rolled two or more guard symbols (more on this later), they can choose to either continue rolling or take the associated number of tunnel cards based on the pairs they currently have. The number of cards earned for different sets are as follows: 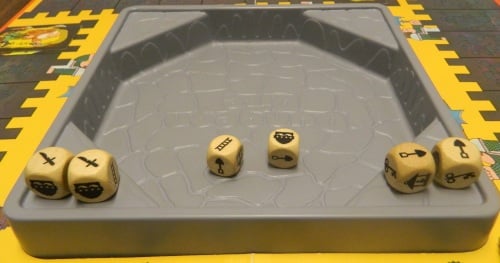 The player rolled the dice and got two swords, two shovels, a ladder and a guard. The shovels and swords are placed on the wall for being pairs. The player can either stop and earn 0 cards or they can roll again. They would re-roll the ladder and the guard dice. In order to continue rolling the dice they either need to roll a sword, a shovel, or a pair of other symbols. 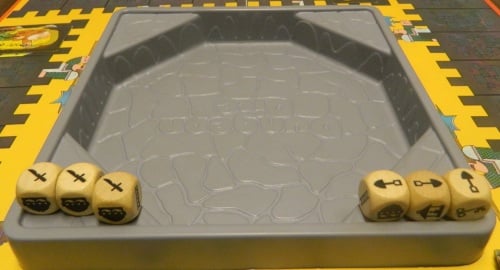 In the picture above the player rolled three shovels and three swords. So far the player has earned two tunnel cards. They can either quit and take their two cards or they can roll all six dice again. If they roll again they add additional cards earned to the two they have already earned. They could also lose all of the cards they earned on the turn.

During the game, players may roll guard symbols. When two guard symbols are rolled at the same time, players are forced to continue rolling until one of the following occur: 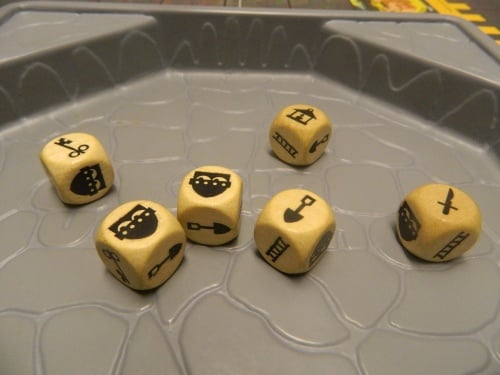 The player has rolled two guard symbols. The player is now forced to continue rolling until they either lose their turn, get all six dice on the wall, or roll a third guard symbol.

On a player’s turn they may challenge another player instead of rolling for themselves. The challenger needs to announce the player that they plan on challenging. The challenger then has three rolls to get at least three guard symbols. If the challenger is unsuccessful, their turn is over. If they are successful they take one tunnel card from the opponent they challenged. If they are successful they are also able to keep challenging the same opponent. If at any time they are unsuccessful, they have to give back all of the cards they stole from the player during that turn.

The first player to place 8 tunnel cards on their escape path, is the winner.

Dungeon Dice is a dice rolling game created in 1977 by Parker Brothers. You play as a prisoner who has been thrown into a dungeon. You and the other players refuse to waste away in the dungeon so you decide to try and break out. Can you dig your way out of the dungeon before the guards catch you?

Being a dice rolling game, Dungeon Dice had its’ work cut out for it. There are so many dice rolling games on the market and very few are anything more than just another average game. Most dice games are pretty much the exact same game with only slight differences in rules and theme. You roll the dice and try to make sets of various dice to score points. Dungeon Dice fits this mold while trying to add an escape the dungeon theme. Dungeon Dice is not a terrible game but it really doesn’t bring anything new to the table.

Dungeon Dice’s biggest distinguisher from other dice rolling games is its’ theme. I haven’t played another game that is exactly like Dungeon Dice but I would be shocked if there wasn’t another dice game that either had the exact same or very similar rules. The theme is kind of unique but it doesn’t really add much to the game. The components do a decent job building up the theme. The theme also makes the game more interesting than just rolling normal dice. The theme isn’t really implemented at all in the gameplay itself though. You could just as easily ditch all of the components of the game and play it with normal six sided dice having each number correspond to a different symbol. The theme doesn’t hurt the game but it does very little to make the game more enjoyable.

Like most dice rolling games, luck has a big impact on who ultimately wins. If you don’t roll well, your strategy is pointless since you can’t win. If you are a fan of dice rolling games though the luck factor shouldn’t really bother you since it is no worse than any other dice rolling game. I have to say though that the three guard penalty is a little harsh in my opinion. It is bad enough that you lose all of the cards that you had acquired on a turn. You also lose one of the cards that you have acquired on a previous turn. This penalty tends to keep players down that are already behind.

With a large reliance on luck, Dungeon Dice really doesn’t have any strategy to it. It does have some risk/reward mechanics though. In Dungeon Dice you are rewarded for taking risks. The more of a symbol you have, the more cards you get. On your first roll you generally either earn zero or one card. If you have earned zero cards you might as well roll again since the only risk is to roll three guards and if you don’t take risks in these situations you will never win the game. Now if you roll well enough to get one card you need to decide whether you want to just take the one card or if you would like to press your luck. If you never press your luck you most likely won’t win since the other players can gain ground on you quickly. On the other hand you can’t be too risky since you will most likely lose all of the cards you have earned on that turn. In my opinion if you have acquired at least two cards or the odds are against you being able to roll a symbol that will get placed on the wall, you should probably just take the cards.

At least in the game I played, there were some pacing issues with the game. I could see the game being very quick or quite long. If one player rolls well they can build a significant lead. The challenge system does work to make the game closer, but it really didn’t solve the problem in the game I played. Once players start to fall behind they need to start taking more risks. Usually these risks don’t pay off and the players fall even further behind. In the game I played I think I had more cards than all of the other players combined at the end of the game. The ending was quite anti-climatic.

I alluded to this earlier but the components of Dungeon Dice are kind of pointless. All you would need to play the game would be six 6-sided dice and something to keep track of score. The gameboard is only used to add to the theme and helps keep track of the score. The tunnel cards are also kind of pointless since you could just as easily keep track of the score on a piece of paper. The tunnel cards do add some charm to the game though. The artwork on the cards is pretty nice but it gets repetitive since a lot of the tunnel card artwork repeats itself. The wooden dice are nice since they help add to the theme. I like that the symbols are engraved into the dice so the symbols are easier to see in cases of fading. The dungeon pit is made of somewhat thin plastic but I liked the detail on it which helped with the theme. So overall I thought the contents were solid but I personally think the game could have done without the gameboard which would have shrunk the game box by quite a bit (the box is the typical rectangular size).

I was not particularly complimentary of Dungeon Dice in the review. Dungeon Dice is not a terrible game but it fails to do anything special and it relies too heavily on luck like all dice rolling games. While I have never played a game exactly the same as Dungeon Dice, I have a strong feeling there is another dice game out there that has either the exact same or very similar rules.