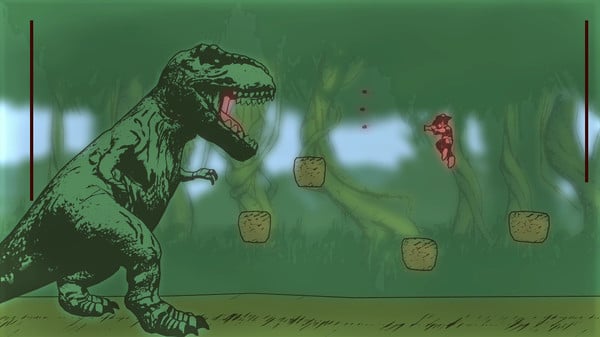 I would say that the game has a good blend between the shooting and platforming elements. The shooting generally works well. The game gives you a standing and crouching shooting position which allows you to shoot some enemies without exposing yourself to damage. I wish the game would have given you an angled shot though because you can only shoot left and right which means you will likely take damage killing some of the enemies. The shooting elements work best when the game combines it with the platforming.

Being a fan of platformers I was mostly interested in the platforming aspects of the game. I would say that the platforming is solid since the controls usually work pretty well. At times your character does kind of move in a clunky fashion. You can end up pushing the jump button and it could take a little time to respond which will likely lead to some deaths. It is also kind of hard to stop your character at times. Your character has a tendency to continue moving for a couple steps even after you have let go of the analog stick. This will lead to some damage but not a lot of deaths. Gunman Clive 2 doesn’t usually require pinpoint platforming since there are no points where you have to jump on narrow platforms.

While Gunman Clive 2 has some interesting mechanics none of them are particularly original. Other than jumping and shooting, a couple levels involve riding various animals/vehicles while avoiding obstacles and shooting enemies. These levels are a nice change of pace but they don’t really add anything that hasn’t been done before. The game also has quite a few levels that deal with gravity manipulation. These mechanics work well but don’t bring anything new to the genre.

One area I really liked about Gunman Clive 2 were the boss fights. Before facing the final boss you will encounter several other bosses based on the theme of the preceding levels. I thought most of the boss fights were well done. They provide some challenge but are manageable once you get the hang of their attack patterns. The multi-shot powerful is particularly powerful against the bosses since you can dispose of the bosses pretty quickly with it. Some of the boss fights are pretty hard without it though.

Difficulty wise I would classify Gunman Clive 2 as a moderately difficult game. I played the game on medium difficulty and I found the difficulty to be just about right. A couple of the levels were slightly frustrating but most of the levels are the right blend of being challenging but not frustrating. In most levels you will likely die at least a couple times but you shouldn’t encounter a situation where you have no idea how to defeat a level.

One of the things that first caught my eye about Gunman Clive 2 was the artwork. All of the artwork in the game is made in the “hand drawn” style. While there are other games that have used a similar style, Gunman Clive 2 does an amazing job with its artistic style. Usually the artwork in platformers is pretty ho hum with nothing to really speak about positively or negatively.That is not the case in Gunman Clive 2. Its’ hard to explain why but the artwork style is one of Gunman Clive’s greatest strengths. While the artwork is not enough to warrant a purchase by itself, it creates a great atmosphere for the game.

After playing Gunman Clive 2 I have to say that I was surprised by the retail price of the game. At only $2.99 Gunman Clive is a terrific value. The game includes 25 levels and took me around four hours to complete. Each level in the game probably only takes about a minute to complete if you are able to complete it without dying. That is highly unlikely though so quite a bit of the length comes from having to repeat the levels when you die. In most games this would frustrate me since I hate repeating content but it didn’t bother me that much in Gunman Clive 2. A couple levels were a little frustrating requiring a lot of restarts but it was manageable.

In addition to the 25 levels the game contains four different characters to play the game with. I didn’t end up playing the game with the other characters since I don’t particularly care for replaying games. Each character has some unique abilities though so if you try them all out you could get quite a bit more playtime out of the game. Completing the game with each character will also earn you an achievement. The game also rewards you with an achievement if you are able to complete all of the levels without taking damage.

While Gunman Clive 2 is not the best game ever, you can’t deny the value at $3. Similar games usually retail for between $7 and $10. Unless you hate the genre, I can’t imagine you not getting your money’s worth out of Gunman Clive 2.

Gunman Clive 2 is a good game. I had fun playing the game since it does a lot of things right. The art style is great and the gunplay and platforming is solid. A couple issues keep Gunman Clive 2 from being a great game. At times the platforming controls feel a little clunky. Also outside of the artwork the game is not particularly original since all of the mechanics in the game have been done before.

You definitely can’t beat the value the game presents since it is only $3 retail and should last you around four hours. If you like 2D platformer shooters like Mega Man, you should really like Gunman Clive 2. At $3 I don’t know how you could go wrong.