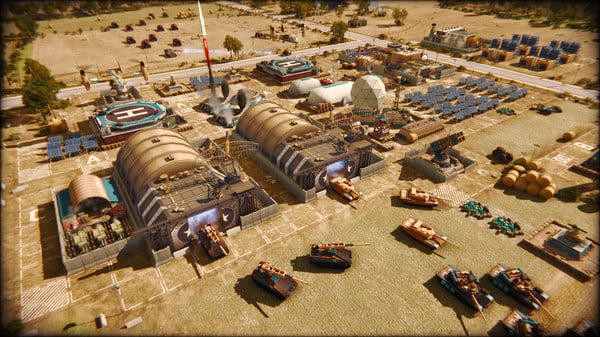 Ever since I can remember I have always loved the RTS genre. StarCraft is one of my favorite video game franchises of all time. Unfortunately the RTS is not a mainstream genre these days. You can usually find at max a handful of decent RTS games released every year. Other than studios like Blizzard, video game developers are rarely willing to take risks on the genre anymore.

Most RTS games have two main mechanics. There is base building and troop deployment/combat. When I play RTS games, I usually prefer the base building/resource gathering aspects of the genre. While a lot of people hate having to build up their bases and gather resources, for some reason I have always enjoyed this part of RTS games. I would actually prefer to build up the military forces and let someone else deal with the battles themselves.

While Act of Aggression still has quite a bit of base building/resource gathering, these aspects seem to be somewhat streamlined. Act of Aggression doesn’t have your typical worker unit that gathers resources/builds building. When you place your building the game automatically send out a unit that builds the building and then it disappears.Unlike a lot of RTS games you must build all of your buildings within a certain distance of the main building. You can build buildings that extend this range but this forces you to plan out how you want to build your base. You have to build your buildings somewhat close but you don’t want to build them too close because if one building explodes it will damage nearby buildings.

While I had some issues with the base building mechanics in the game, I still thought they were pretty good.

I have never been good at the tactical side of battles in RTS games. Generally my strategy in these types of games is to just build up a large group of troops and just overwhelm the enemy. Since I find it too hard to micromanage my troops, I would rather just throw them all into the fire instead of strategically deploying them. In games like StarCraft this works in the campaigns and against other average players online. Since I care more about the base building I like that you can still succeed in those type of games without a good eye for strategic combat. This will not work in Act of Aggression which makes the game a lot more difficult than I was expecting.

I know that I am usually terrible at tactical combat in these types of games but I think that the game could have done a better job training you to be better at the tactical aspects of the game. While I give the game credit for slowly introducing new mechanics into the game, the game doesn’t really do a good job explaining the strengths and weaknesses of each unit and how you should deploy them in any given scenario. Not being a tactical genius, I would have found this to be very helpful.

While I didn’t particularly like the tactical combat, people who enjoy this type of combat should really enjoy Act of Aggression. The game provides players with many options of how to manage their troops. I really liked the idea of letting troops garrison inside buildings in order to gain cover and a strategical advantage over other troops. The game appears to have quite a bit of depth for players who like to micromanage their troops.

Overall it is kind of hard to estimate how much time you can get out of Act of Aggression. If you looked at my Steam profile my playtime is not that long. So far I have only played about half of one of the campaigns. I would guess that the campaign will probably last around 10 hours but it could be shorter since I haven’t finished all of it and I wasn’t particularly good at the game. I have yet to try multiplayer because I would be destroyed. Act of Aggression is the type of game that I will probably play occasionally in order to complete the campaign mode.

Just like most RTS games though, the multiplayer will be the true test for the game. You will almost always spend more time in the multiplayer than you do in the single player for a RTS. I can’t really comment on the community for Act of Aggression since I haven’t played any online games. I think the game’s mechanics could work really well for a multiplayer game though.

I had a hard time telling a lot of the different types of troops apart. Unless you zoom in closely it is hard to tell the difference between troops. The individual soldiers are sometimes hard to see at all. There are at least five different tank types which were really hard to tell apart. Since your troop deployments are so important for success, it is hard to properly control them when you can’t even tell them apart.

I found it really hard to use individual soldier units. The problem is that they walk way too slow and it is too much of a hassle loading them into transports and then unloading them when you get into a battle. At first I was getting frustrated that all your troops would move at different speeds which made all of your troops arrive at different times or you had to micromanage their movement every few seconds. After playing the game for a while I found the setting in the options menu that forces all of your troops to move at the same speed. Due to these problems I tried to use as few individual soldiers as I could.

Overall I found the story to be kind of bland. I haven’t finished it yet but it just seems like another story where you are trying to stop terrorists/the bad guys. There just isn’t anything particularly interesting about the story. This is accentuated by the voice work in the game. Some of the voice acting is not bad but some of it is bad.

I found the graphics to be pretty good. Obviously if you zoom in right next to your troops they aren’t going to look fantastic since they never do in RTS games. The game does a good job maximizing the graphics based on your hardware specs even though it takes a couple of minutes to do it. I really liked the satellite view which makes it easy to see all of the buildings, troops and resources in your bases. The game did appear to be kind of slow switching between the different camera angles though.

Act of Aggression is a good game. The game is interesting and has some good mechanics. The game gives you a lot of options as far as combat is concerned and does a good job streamlining the base building aspect of the game. Unfortunately if you are not good at tactical combat you could really struggle with the game. Act of Aggression is the type of game where if you don’t have the right deployment of troops, your army can be wiped out quickly. The combat relies heavily of having the right troops for the right situations. I generally prefer RTS games that focus more on the base/troop building and less on the tactical deployment of your troops. I had fun with Act of Aggression but it is not the type of game that I would play all the time.

If you like micromanaging your troops though I think you will love Act of Aggression. Players who like this type of combat could probably add at least another point to the score that I gave Act of Aggression since you should like it a lot more than I do.