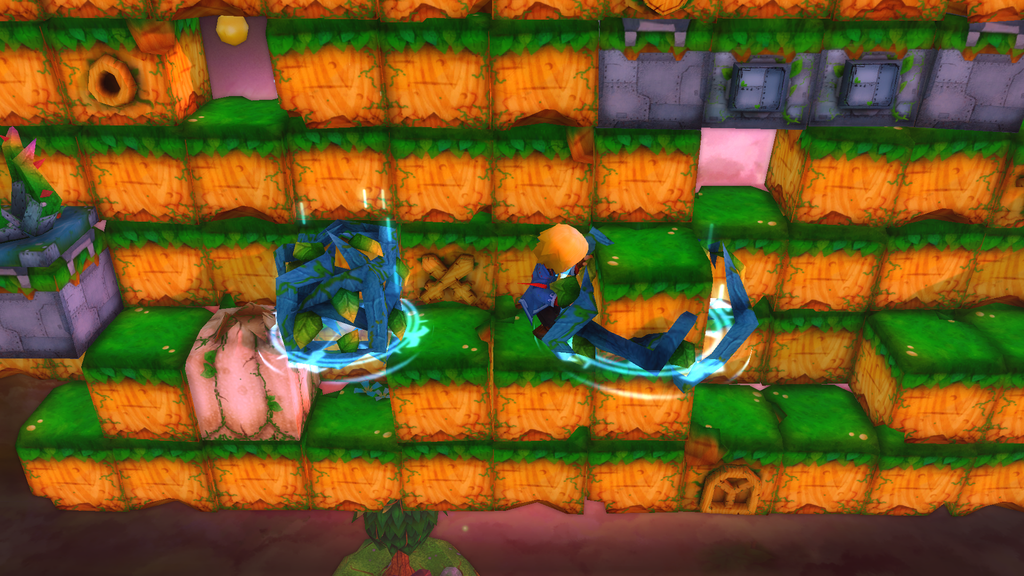 A Fun But Easy Experience

The main mechanic in Almightree is obviously the puzzle solving. Essentially every level is a race against the clock. You must traverse each level before the ground beneath your feet crumbles. You will face various obstacles that will block your path which is where the puzzle solving comes into play. Your character has the ability to transport any nature block (not metal) to any unoccupied space. You can use this ability to fill in gaps in the world or even build a staircase to climb up to higher ground.

There are some catches to this ability though. You must first select the space where you want to place the block. All blocks are placed one level higher than your current position on the adjacent space in the direction you are facing. You will then have to find the block that you are going to transport. You can only take blocks that you can move your character next to. Once you have selected both locations, the block will be transported. The gameplay reminds me a lot of the game Catherine even though I have never played the game before.

Most of the puzzles in the game are solved by manipulating the different blocks along your path. There are some other mechanics but the majority of the puzzles revolve around this mechanic. At first the mechanic seemed kind of boring and I thought I was going to tire of it pretty quickly. I was actually surprised that the mechanic actually grew on me and became slightly addictive for a while. The mechanics do a good job creating an interesting puzzle game.

Unfortunately Almightree: The Last Dreamer is definitely on the easier side of puzzle games. While a couple of the puzzles may take a little while to solve, you will usually figure out the solution to most of the puzzles almost immediately. The game does have different difficulty levels but the only differences that they make is changing the amount of time you have to solve the puzzles before you die. Playing on the medium difficulty, the game usually gives you plenty of time to solve the puzzles. I only died a couple times and quite a few of those I can attribute to the controls (more on this later).

While the mechanics are fun, I wish the game provided a little more challenge. If you play on the easy level you might never even die in the game. I never tried the hard difficulty but since all it does is decrease the amount of time you get to solve a puzzle I didn’t really see the point. The hard difficulty may offer some challenge if you have never played the levels before but after you have solved the levels all it will do is test how fast you can move the blocks. This didn’t seem to be worth the effort in my opinion.

The Controls Get In The Way

Let’s discuss the controls of Almightree: The Last Dreamer. While not terrible I did have some issues with them. The main problem I had was with turning or stopping the character. I used a controller and for the most part the character would regularly go one or two extra tiles in a direction even after I had either let go of the analog stick or changed directions. While you can somewhat adjust to it, it does get frustrating when you have to backtrack because a character ran too far.

The other issue comes from the fact that you can actually dig yourself into a hole that you can’t get out of. You can actually place the blocks in a way where you can get stuck. The game has an undo feature which usually helps but you can only undo the last couple of blocks so if you make a mistake and don’t notice it right away you could actually get stuck in a position where you have to restart a level because there is no way you could actually finish the level.

Almightree: The Last Dreamer currently has 20 different levels. Each level will usually take around five minutes to complete. Playing at the medium difficulty I was able to complete all 20 levels in around two hours. That is kind of short. The game does offer different difficulty levels and you can always try to improve your score/time. If you are like me though and don’t really care about improving scores, you won’t get a lot more than two hours of gameplay out of the single player.

The game also includes some multiplayer. The multiplayer is the same as the single player but with a competition between the two players. The multiplayer mode uses the same levels as the single player game but the levels are all set at the hard difficulty. Both players compete on the same map to see who finishes first or who lasts the longest. I didn’t feel like this added a whole lot to the experience. Other than being able to see where the other player is, there is no real interaction between the two players since you can’t do anything to impact the other player. I think the multiplayer mode would have been more enjoyable if players could have affected the other player’s world so players could mess with one another.

The value you can get out of Almightree is kind of hard to judge. The game is not particularly long. I ended up spending a little over two hours with the single player and another 30-45 minutes with the multiplayer. At this time I don’t plan on really spending anymore time with the game. With a retail price of $4.99, Almightree won’t break the bank but you also probably won’t get a lot of time out of the game.

Almightree: The Last Dreamer is a pretty good puzzle game. At first I only thought the game was pretty average. As I continued to play the game though it really started to grow on me. While the game is easy, it has some interesting puzzles that are fun to figure out. The two main problems with the game though are some slight control issues and that the game is pretty short at only around two hours long.