The game begins with setting up the game board and giving every player their playing piece, pencil, and answer pad sheet.

Each round begins with the round leader (rotates every round) rolling the dice. A card is then drawn and the question that corresponds to the number rolled is read to all of the players. All of the players take a guess at the year/number that is the answer to the question asked. Everyone reveals their answer. The correct answer is revealed and the player whose answer is closest to the correct answer (higher and lower guesses are both valid) gets to move their player token two spaces. In addition if any of the players get the answer exactly correct (very rare) they get an extra space. If the question was written in green text, the player who had the closest answer takes possession of the dueling chip. 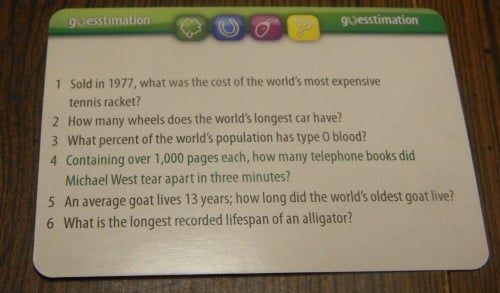 Pictured above is a card from Guesstimation. The players would try to answer the question that corresponds with the number rolled on the die. If a four is rolled the dueling chip would go to the winner of the question.

In addition to the basic rounds, there are dueling rounds. After a non-green question is read but before anyone answers the question, the player with the dueling chip may challenge another player. They pick who they would like to challenge and how many spaces (between 1-3) they would like to bet on the question. The challenged player must always accept the challenge. The two players in the duel then answer the question. Whoever is closest moves forward the number of spaces bet while the other player moves back that many spaces. The other players not in the duel can provide an answer for the question and if they somehow get the answer exactly right they get to move forward three spaces. Once the duel is over the dueling chip is returned to the gameboard.

The first person to reach the finish line is the winner.

For those unfamiliar with Wits and Wagers, here is a quick recap of the differences in the rules. In both games the questions are of the same variety where the players need to guess the number/date. Wits and Wagers follows the “Price is Right” rule though where only guesses lower or equal to the actual answer can win the question. Once all of the answers are revealed, all of the players are allowed to bet chips on the different answers that they think are correct. They can bid on either their own or other players’ answers. Correct bids on the closest answer wins chips while incorrect bids lose chips.

As you can tell the gameplay in both games are very similar. The only main difference is how players score points. Guesstimation is not a bad game and is fun at times but Wits and Wagers’ rules/gameplay are considerably better in my opinion. Guesstimation’s rules just seem like a simplification of Wits and Wagers and the game as a whole feels like a poor man’s Wits and Wagers.

The gambling mechanic is the main reason why Wits and Wagers is a better game. In Guesstimation you pretty much just answer the question and you find out the winner. There is no player interaction and it is just kind of boring. Meanwhile in Wits and Wagers there is quite a bit more interaction between the players. The gambling mechanic adds more variety and strategy to the game. It allows players that are not as good at the trivia aspect of the game, a chance to stay in the game. Unfortunately none of this is present in Guesstimation and due to that fact the person who is best with the trivia aspect will almost always win.

So would I recommend purchasing Guesstimation?

If you like party games, the concept sounds interesting, but you have never played Wits and Wagers; I would recommend picking that up first. Wits and Wagers is the superior game in my opinion and is a great game that I would highly recommend to fans of party/family games.

I agree with your statement. I honestly never thought about how Wits and Wagers would work with a non-USA audience. I honestly kind of assumed that they would include different questions for different countries version of the game to make them more relevant. Along with not having the metric system answers (I have no idea why they didn't include this as many games usually do) was a bad decision by the publishers of Wits and Wagers. I guess I wrongly assumed that the publishers would adapt the game to work for audiences outside of the United States. Thinking about it, this is an issue for Wits and Wagers.

As for your question about the cards in Guesstimation, I unfortunately don't know. I don't know where my copy is at the moment so I can't check to see. I would guess the cards would be pretty similar as I just picked a random card from the deck for the picture.