When a blank “_________” appears in the story the current player is responsible for filling in the blank with the word/words on the card they randomly draw. Players keep the cards they chose in front of them so they can be used later in scoring. When the story reaches the intermission the score is calculated. 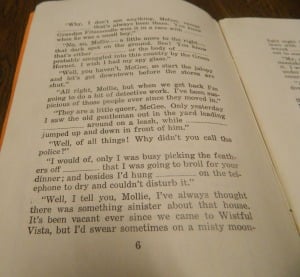 Scoring is calculated as follows. Some of the cards have numbers written on them. The numbers written on the cards are added to the players’ scores. Bonus points can also be scored. If you get two or more matching numbers you add the numbers together and multiply by five. For example if you had two 2’s you would get 20 bonus points ((2+2)*5). In addition if you have at least three numbers in sequential order, you get 10 points for each number. For example if you have a 2, 3, and 4 you would get 30 bonus points. 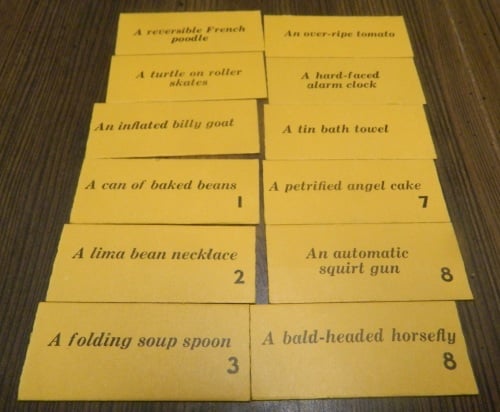 After all points are totaled the cards used by the players are placed into the box and the second half of the story is read. When the story ends, scores are totaled again and whoever has the most points at the end of the game is the winner.

Starting in 1935 and ending in 1959, Fibber McGee and Molly was a long running radio comedy series. The series followed the wacky adventures of Fibber McGee and his wife Molly. The show was mostly about Fibber McGee’s wacky imagination and his poorly thought out schemes. Being born many years after Fibber McGee and Molly went off the air, I had never heard of the show before finding the game at a thrift store. Being created in 1940, Fibber McGee and the Wistful Vista Mystery is one of the oldest games I have ever played. Due to being almost three times as old as I am, I was not expecting much from the game. The game actually surprised me in one aspect but for the most part it lived up to my expectations.

The easiest way to describe Fibber McGee and the Wistful Vista Mystery is to think of Mad Libs (Fibber McGee actually predates Mad Libs). For those of you not familiar with Mad Libs, essentially they are books that tell a story where key words are missing from the story. The person reading the book needs to fill in the the blanks with words they choose. You could theoretically fill in the blanks with normal words and create a completely normal story. The fun comes from inserting completely random words though which would end up making a ridiculous story.

Fibber McGee and the Wistful Vista Mystery takes this concept and tries to make a game out of it. In the game you are presented with blanks and you end up drawing cards in order to fill in the blanks. Being such an old game I wasn’t expecting much from the story. The story is quite outdated and you can quickly tell its’ age just by the type of language used in the game (nothing really offensive but quite a few words are used that really aren’t used anymore). The story itself is not very good but by adding the random words to the story it can become pretty funny. The story does a good job placing the blanks at the right spots in the story. At times our group was laughing out loud since the story was so random that it became hilarious. For example some of the phrases that can enter the story include “a parrot wearing a tuxedo” and “a pair of fidgety ear muffs”. In order to enjoy the story you really need to be in the right mood though and I know some people won’t like it at all.

I was actually pleasantly surprised by Fibber McGee and the Wistful Vista Mystery’s story/humor. Unfortunately that is essentially where all the good things end. There is so little to the game that you could debate whether it is even a game. As a player you have absolutely no impact on the game. You read through the story and occasionally randomly pick a card to add to the story. Unless you cheat you have no way of doing better at the game than any other player. Whoever gets luckiest with drawing cards wins the game.

In addition the scoring system is really stupid. The points are distributed randomly. There is nothing you can do to improve your chances at getting points. Scoring points feels so shallow since you really didn’t do anything to earn them. The ultimate winner will be the player who earns bonus points since the bonus points are so large compared to the points you earn from a simple card. I think a better scoring system would have been to earn points if you could say the phrases in the context of the story with a straight face and end up not laughing. The scoring system is so stupid that our group just abandoned the scoring system and just read the story while filling in the blanks (totally ignoring the gameplay portion of the game).

The game only comes with one story so the replay value is questionable. Every time you play the game the main story will be exactly the same. There are quite a few different word cards which will make the story a little different but they will not impact the overall story since the cards only impact minor details in the story. The novelty of the story will wear off every time you play the game. I had some fun with the game but I don’t see getting nearly the same enjoyment out of the game if I would for some reason play it again.

Unfortunately Fibber McGee and the Wistful Vista Mystery is a one trick pony. I actually think the game could have been good if some actual gameplay was included. The “Mad Lib” mechanic is actually an interesting idea for a game but something else needs to be added to make it an actual game. The gameplay honestly deserves a 0 out of 5. The game’s saving grace is that it can lead to quite a few laughs at least for the first time you play the game.

I actually had some fun playing Fibber McGee and the Wistful Vista Mystery due the totally ridiculous story. If you like wacky/ridiculous stories you have a good chance at laughing at the story. Unfortunately there was no gameplay to back it up. The gameplay is totally random, the scoring system is pointless, and the ultimate winner does nothing to actually win the game. On top of all that there is only one storyline so the game pretty much becomes a one play game.

If you don’t like Mad Lib/fill in the blank story telling, there is nothing here for you. If the concept behind the game interests you, you might get some enjoyment out of the story. It probably won’t last very long though. If you can find the game for cheap it might be worth giving it a try since it is a unique experience. Unfortunately due to its’ age I think the game will be difficult to find and is likely to be more expensive than it is worth.