The game of Across Ticklers is based on acrostics. What is an acrostic you may ask? An acrostic is the idea of making a sentence with words that start with each letter of another word. For example, an acrostic for the word “game” could be “George Ate Many Eggs”.

To begin each turn a player spins the spinner to determine which type of round will be played. The three types of round are as follows:

Player’s Round: Everyone draws a card and rolls their die. Each player than attempts to create an acrostic with the word on their card that corresponds to the die roll. Any player that can successfully complete an acrostic before the timer runs out gets to move the number of spaces indicated on their die roll.

Go Round: One card is drawn for all of the players and a die is rolled. All of the players work with the word on the chosen card that corresponds to the die roll. Players alternate letters and try to create an acrostic before the timer runs out. If successful all players move the number of spaces indicated by the die roll.

Speed Round: One card is drawn and a die is rolled to determine the word to use. All players then try to create their own acrostic based on the chosen word. Whoever is first able to create a correct acrostic gets to move their piece the number of spaces shown on the dice. 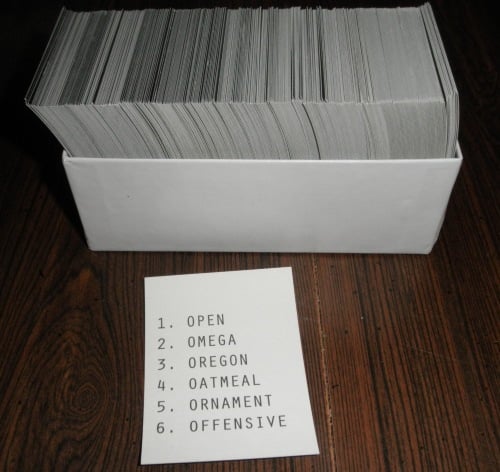 If a player rolled a 2, an acrostic would need to be made from the word Omega. An example could be “Ordinary men enjoy great art.”

The game ends when one player crosses their finish line.

When rummaging through a local thrift store, I came across the game Across Ticklers. I had never heard of the game or the publisher before which is not that surprising since it doesn’t appear to be a very well known game. Since I found the game for cheap I thought I might as well give the game a chance. The concept of the game is interesting and actually pretty fun but the gameplay itself is disappointing.

The object of the game in Across Ticklers is to make a sentence with each word starting with a specific letter. The game is actually quite a bit like the game Plext (my review of Plext). Across Ticklers essentially makes a game out of that project you used to have to do in school where you wrote the letters of a word top to bottom and then had to come up with a word that matched every letter.

The best part of Across Ticklers is trying to create the acrostics. If you are not into word games you won’t enjoy it, but I thought it was pretty fun. The difficulty of the game varies from word to word with some being quite easy while others are quite challenging. Although the longer words are hard to complete on time, they also lead to quite a bit of the enjoyment in the game. Since there is a time limit these longer words force players to rush to finish their sentences on time. As the end draws closer players start to patch in any word they can think of for the next letter. The player then has to try and defend why their sentence makes sense and should be counted. Some of the sentences can get quite ridiculous and are quite funny when players try to defend them. The game never really takes itself that seriously. If you are a more serious gamer, Across Ticklers may not be for you.

While trying to create acrostics alone is fun, I think trying to create one acrostic with all of the other players was more enjoyable. It is quite challenging to make a logical sentence with the other players. Unless you are totally in sync with the other players, you have no idea what word they are going end up adding to the sentence. You might anticipate the next word a player will add and then they will add a totally different word messing up your thought process. Then with the timer ticking you need to try and think of another word that somehow makes sense with the word that was just added. This is much easier said than done.

The gameplay itself has some reliance on luck but for the most part your skill will be the determining factor in the game. Luck only affects the game in the “Player’s Round”. The card a player takes and the number they roll will determine how hard that round will be for them. There is a pretty significant difference in difficulty between the easiest and the hardest word but that luck is offset by longer words giving the player more spaces. You are probably best off rolling a middle number. The low numbers are quite easy and don’t reward you with many spaces. Meanwhile the high numbers are very hard to complete in time.

While Across Ticklers has a pretty solid gameplay mechanic, it really doesn’t have much else. It’s like the designers of the game decided to make a game around acrostics but put little thought into the gameplay before shipping the game. The whole gameplay involves rolling the dice, creating some acrostics, and then moving player pieces according to the outcome. Case in point is the fact that the “Go Round” has essentially no impact on the game. Either all of the players move the same number of spots or none of the players move any spots. Therefore the only impact the “Go Round” has is moving everyone closer to the finish line.

The gameplay outside the acrostics mechanic is so limited that I honestly think you could play the game without even owning the game. To simulate a game of Across Ticklers you just need some way to pick starting words (a dictionary perhaps), a timer, and something to keep score with. Essentially you would just pick a word and try to create an acrostic with it. You would then award points based on success or failure and whoever got the most points would win the game.

Across Ticklers is the perfect example of a pretty good mechanic with nothing else to go with it. Creating the acrostics is pretty fun and fans of word games should enjoy it. Unfortunately the rest of the game is bland and pretty unnecessary as well. You could easily play the game with just a dictionary, a timer, and something to keep score with.

If you don’t like word games, you won’t Across Ticklers. For word game fans I personally think Plext is a better game with a similar mechanics. If you find the game for cheap though and you are willing to make up some of your own rules to add some actual gameplay, Across Ticklers may be worth a purchase.