A New Retro Shoot ‘Em Up 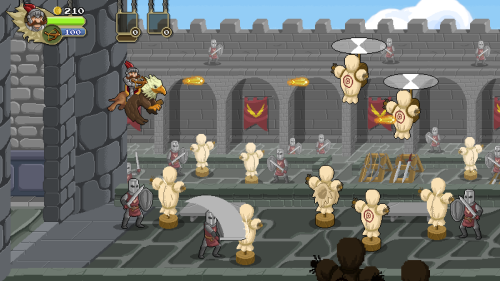 For those of you not familiar with the shoot ’em up genre, the basic idea is that you traverse the game world (usually with your character moving forward by itself) while trying to shoot the many enemies on the screen while avoiding their projectiles. Due to everything on the screen I have always found shoot ’em up to be one of the hardest video game genres.

For the most part Gryphon Knight Epic plays like most other shoot ’em ups. Each level follows this basic pattern: traverse an area with a bunch of enemies to kill, defeat a mini boss, fight through a bunch more enemies, and defeat the final level boss. The normal levels play like you would expect a shoot ’em up to play like. The boss levels are interesting even though the difficulty can vary pretty significantly.

One thing I liked about Gryphon Knight Epic is that the control scheme is pretty simple. Basically you have two different attacks. You have your normal attack which you can thankfully hold down for a constant barrage of arrows. You also have a special weapon that is either charged up or has some other special ability to it. After beating the boss at the end of every level you acquire a new special weapon that you can use throughout the rest of the game. Most of these abilities use up magic so they can only be used every so often. 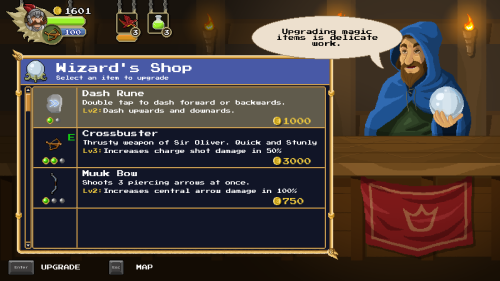 One of the more interesting parts of the game is that between levels you can use the gold that you earned in a level to purchase things to upgrade your character. First you can use your money to purchase potions to help you regain health, damage enemies, or give you other benefits. I generally didn’t spend much money in this area since I don’t like to waste money on consumable items in video games. You can also purchase different squires which help you out as you acquire gems throughout a level. Squires help out by healing you, shielding you, or even attacking your enemies. Finally you can use your gold to purchase upgrades to your special weapons. This is where I ended up spending a lot of my money.

I found the store to be interesting even though I didn’t use it a lot since I didn’t get a lot of gold in the game. Playing on harder difficulties likely would get you more gold which would allow you to shop more but I wish this aspect of the game would have had more impact on the game.

A Hard Game For An Amateur Shoot ‘Em Up Gamer

One of the main reasons that I have never been a big fan of the shoot ’em up genre is that I have always found the genre to be very hard. I would consider myself to be a good gamer but I have never been good at shoot ’em up games. I think the main reason I have trouble with the genre is that I have a hard time paying attention to a bunch of different hazards on the screen at the same time and being able to successfully avoid them. Since I take a lot of damage in the games, I die regularly  which frustrates me and is why I don’t play a lot of games in the genre. 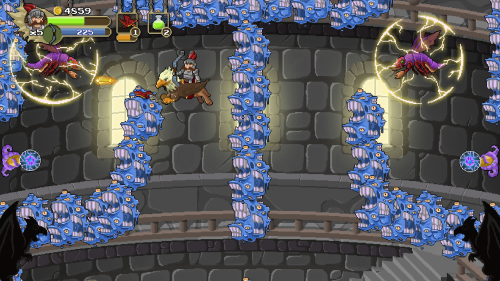 I found Gryphon Knight Epic to be a hard game for me. I don’t play a lot of games in the genre though so that may be why I had trouble with the game. Since I don’t play a lot of shoot ’em ups, I can’t give an opinion on how difficult the game would be for a player who regularly plays schmups. I am ashamed to say this but Gryphon Knight Epic is the first game in many years that I had to play on the easy difficulty. On the normal difficulty there is no way I could have ever finished the entire game. I probably would have only been able to beat a couple of the easiest levels. Even on the easy difficulty some parts of the game were kind of hard.

In Gryphon Knight Epic you play as Sir Oliver and his trusty stead Áquila the gryphon. After defeating a dragon and marrying the princess, Sir Oliver has started to get pretty lazy in his old age. When a new evil force threatens the land, Sir Oliver must once again take up the fight to save his land. Things aren’t as they seem though as for some reason Sir Oliver’s former comrades/friends have turned against him. Will Sir Oliver and Áquila be able to save the land from this evil force?

Overall the story in Gryphon Knight Epic is pretty typical of an adventure type game. The story is pretty average overall and kind of cheesy. It is neither a reason to buy or avoid buying the game. While the game tries to be funny, I didn’t find the game to be particularly funny. Other people may find more humor in the game though. I give the game credit for actually adding a story to the game though since so many indie games ignore adding a story at all.

As of the time of this review, my Steam profile says I ended up playing the game for four hours even though I bet it is closer to five hours. You need to take note of the fact that I played the game on easy difficulty though since it would have taken much much longer on a harder difficulty. On the easy difficultly level I didn’t die a lot so some of the levels I breezed through pretty quickly which makes the game look shorter than it is.

Also outside of beating all of the levels I didn’t really do anything else in the game. I think the game could have good replay value especially for fans of the genre. The game has three difficulty levels, multiple different special weapons, and many different squires and potions to try out in the levels. The game doesn’t have a lot of collectibles, but I could see Gryphon Knight Epic being the type of game that you might want to replay.

At launch Gryphon Knight Epic is retailing at $12.99. The value you get out of the game will probably depend on how much you like the genre. If you are like me and have to resort to playing the game on easy difficulty, I think you will have fun with the game but you are probably better off waiting for a sale. If you like shoot ’em ups though I think you should get your money’s worth out of Gryphon Knight Epic.

I wouldn’t consider myself to be a big fan of the shoot ’em up genre. I have never really liked the genre since I have always found the games to be pretty hard. Despite having to play the game on easy difficulty (which is embarrassing I know), I still had fun with the game. The game has some unique mechanics and the graphics are nice and reminiscent of a reto 2D game.