To be the first player to correctly guess ten correct countries.

To begin each round three of the country cards are placed map side up next to the ranking tiles on the table so that each tile references one country card. One player spins the spinner to determine in which factor the countries will be compared on. Players will play one of their ranking tiles face down to indicate the country they think correctly matches what was spun. 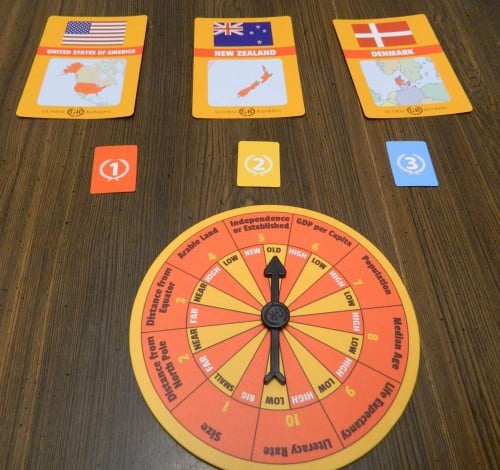 For this round the players will be comparing the USA, New Zealand, and Denmark. The spinner was spun and landed on the oldest independence or establishment. The players would place the corresponding ranking tile face down on the table to indicate their choice.

After everyone has made their choice, the country cards are flipped over and are compared in the respective category. Whichever players chose the right answer receive a point token. Everyone takes back the ranking tile that they played. The current country cards are discarded and three new cards are put out for the next round. 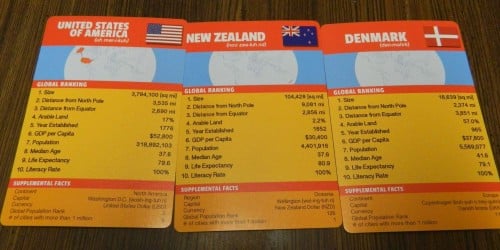 Once everyone has made their choice the cards are flipped over. Looking at the back of the cards; the USA was formed in 1776, New Zealand in 1852, and Denmark in 965. Denmark would have been the correct answer for that round.

Global Ranking features ten different factors in which to compare the countries. These categories are as follows:

The game ends when the first player gets their tenth chip. If only one player has reached ten points, that player wins the game. If two or more people reach ten points at the same time they will use the tiebreaker to determine the winner. For the tiebreaker all tied players draw a country card. A neutral player will spin the wheel to determine the factor that the countries will be ranked by. Whoever owns the country card that would place first, wins the game.

In school I was always interested in Geography. It wasn’t my favorite subject but liked learning about the world that we live in. Recently we at Geeky Hobbies received a review copy of one of SimplyFun’s latest board game releases, Global Ranking. I have never been a big fan of educational games since most of them are pretty boring. Global Ranking looked interesting though since instead of a traditional trivia game, you rank countries based on various factors rather than just answering questions. This mechanic looked interesting to me. While a good trivia game for people who want to learn about Geography, Global Ranking will have trouble appealing to other board gamers.

A Simple to Play Educational Game

Not surprisingly, Global Ranking is an educational game focusing on Geography. The game tests the players on how much they know about some of the countries of the world. Things like size, population, literacy, economies, and even average lifespans are compared between countries to determine which is largest/smallest, oldest/newest, or lowest/highest. While the game only includes 51 countries, which is obviously not all of the countries in the world, the game does try to create a representation from around the globe. The game does seem to favor Europe and North America but it still features quite a few countries from South America, Asia and Africa which are sometimes ignored in these type of games.

For an educational game I think Global Ranking does a good job. Global Ranking is better than a lot of educational games since it is fun as well as educational. It won’t be the most fun you have ever experienced but you should learn something after playing the game. The game includes 10 factors to compare the different countries and also includes information about the capitol, currency, population rank, and cities with more than 1 million people. Due to its’ educational contents, I think Global Ranking could work really well with teaching Geography in a school or homeschooling environment. Natively the game only supports six players so that might be an issue with larger classes but students could either form teams or additional components could be made to support additional players.

One of Global Rankings greatest strengths is that it is easy to play and also quite quick. The rules are only three pages long and only take a couple minutes to read at most. You could probably teach the game to new players in around a minute. The game is just about the right length with games typically lasting around ten to fifteen minutes. With the game being so quick, you could easily play a second game if the group wants to. While the game only has 51 country cards, I still think the game has quite a bit of replayability. Since there are ten different topics to compare the countries with two options for each topic, you rarely will encounter the same question twice since you will usually have different combinations of countries.

With a recommended age of 10+ I wasn’t expecting a very challenging game but I was still a little surprised by how easy I found Global Ranking to be. I was always pretty good at Geography but I wouldn’t consider myself even close to an expert. In all of the games I played I think I only got two or three questions wrong some of them due to the literacy category (see below). If you know at least a decent amount about the world as a whole, you can do a pretty good job at forming a good educated guess on every single question.

This is why I think Global Ranking would work best with families with younger children. Global Ranking would work best in a situation where parents are trying to help their children learn about the world. Unless you are terrible at Geography, most adults shouldn’t have too much trouble with the game. Due to the easy difficulty, the game could get kind of boring for adults though if they aren’t playing with any children.

The good thing is that this mechanic shouldn’t be very hard to add in if you want to. Players would just need to lay out their tokens to indicate the position they predict for each country. You would then have to make some tweaks to the scoring system in order to give players points based on how many countries they got correct.

For the most part I liked the different categories in Global Ranking. The game does a good job picking categories that help teach children about a country but are also quantifiable since you can’t objectively rank countries on something that is not numerical. There are a couple issues with the categories though.

This becomes a problem when you get three cards that all have high literacy. For example in one game we ended up drawing two cards that were 99+% while the other country was 100%. This meant that players needed to choose between countries that were one hundredth of a percentage different which means all you can do is guess. I also kind of question some of the literacy rate statistics in the game because while the United States has high literacy, it is not 100% like the game suggests.

The other issue I had with the categories was with the size and distance categories. I liked the idea behind these questions but they don’t work since each card shows a picture of the country on it. That kind of defeats the purpose of asking about size or distance since looking at the picture will give you a strong hint at the right answer. For example when looking for the largest country you can look at the countries on the cards and get a good idea of the smallest and largest country. The pictures also help with the distance questions since you can usually use the map on the card to help judge how far north or south the country is. I am guessing the game decided to include the pictures of the countries on the cards for information purposes. The pictures help players recognize countries that they may have never heard of before.

The biggest problem with Global Ranking being kind of on the easier side is that it ends up causing quite a few ties at the end of the game when two or more players reach ten points at the same time. Unfortunately all ties are broken with a terrible tiebreaker.

Essentially for the tiebreaker all tied players draw a card. Then a neutral player spins the wheel. The tied players compare that category and whomever’s country wins the category, wins the game. This is totally unfair in my opinion. This tiebreaker relies solely on luck since you have no impact on what card is chosen and what category is spun. For a game that relies on you knowing/guessing trivia about various countries, it is so disappointing that the final tiebreaker depends on a random spin of a spinner.

I don’t know why the game couldn’t have just simply had the tied players play additional rounds until only one player was correct. This would take longer since you could go through several rounds to find the winner but it would have been a lot more fair. This way the winner would actually be determined based on knowledge instead of luck.

It is kind of hard to give Global Ranking an overall rating since what you get out of the game is dependent on the group you are playing the game with. Global Ranking was made for school settings and families with younger children that want a game to learn about Geography. If you fit within that target demographic there are quite a few things to like about the game since I think it could be quite educational.

If you really aren’t looking for an educational geography experience though you probably won’t get a lot of enjoyment out of the game. You might not mind playing a couple quick games but you will probably tire of the game pretty quickly. For most of the questions the game is also pretty easy so it probably won’t work well for groups that don’t include younger children.

So when it came down to giving the game a final score I had to rate the game based on how I felt about it. I had some fun with the game but it was too easy and I kind of got bored of it pretty quickly. I didn’t have any younger children to play the game with though so I wouldn’t consider myself part of the target demographic. If you are looking for an educational Geography game though I think you will enjoy the game quite a bit more. If you would consider yourself in that group I would probably add at least another point or more to the 2.5 I ended up giving the game.

If you are interested in purchasing Global Ranking you can purchase the game from SimplyFun.com.