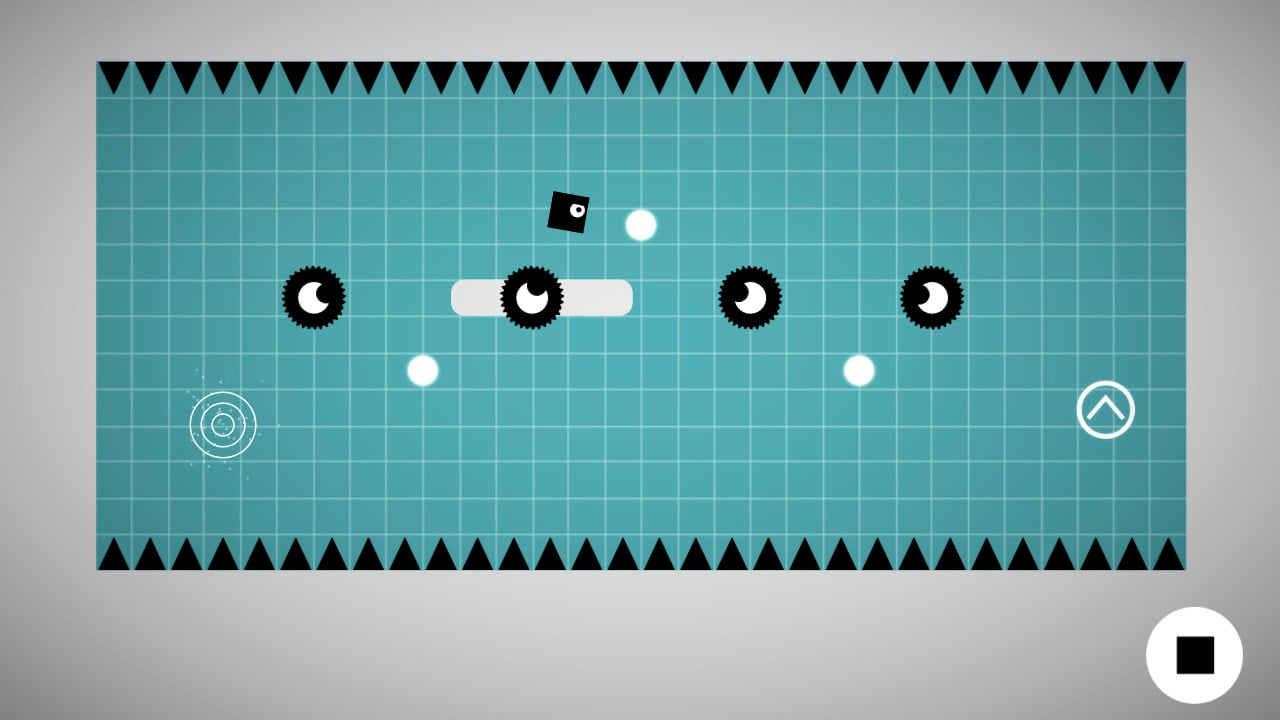 One of the genres that indie games have done a good job with have been puzzle/puzzle-platformers. Due to not having to risk millions of dollars on a new property, indie developers have been able to actually take risks and try to pursue some new ideas for games that would have never been made by AAA studios.

In the puzzle/platformer genre, one topic that a lot of indie developers have decided to explore is the idea of being able to manipulate gravity in the game world. Today I am going to look at on of these games, a recent Steam release called Gravity Error created by Faris Mohammed. While a little on the easy side and kind of short, Gravity Error is still an interesting and entertaining puzzle-platformer.

In Gravity Error you play as a character named Force, a black square whose only distinguishing feature is a googly eye. The main gameplay mechanic involves placing circles in the game world with arrows pointing in different directions (referred to as gravity modifiers for the rest of this review). When Force runs into one of the gravity modifiers, the gravity will suddenly change to the direction indicated on the circle that Force ran into. Since these gravity modifiers have to be placed before starting the level, the player needs to figure out the ideal method to guide Force to the exit portal while also trying to grab the three glowing orbs.

For each level you are given a limited quantity of gravity modifiers and for most of the levels you only get modifiers for certain directions so you are unable to do whatever you want in the level. This is where the puzzle gameplay comes into play. Before starting the level you need to plan out how you are going to move through the level so you are able to decide where you want to place the gravity modifiers. One thing I really liked about Gravity Error is that you can pretty much place the modifiers wherever you want in the level outside of putting them in walls or directly on your starting position. This gives you some freedom in how you would like to approach each puzzle.

For a puzzle game to be successful, the puzzles have to actually be interesting. If the puzzles are boring you are going to tire of the game pretty quickly. You can only do the same thing over and over again for so long before you are begging to do something new for a change. For the most part Gravity Error does a good job in this regard. While almost all of the puzzles deal with gravity manipulation, Gravity Error does a good job creating interesting puzzles. Most of the puzzles take only a minute or two to complete but they are fun to play. If you like gravity manipulation puzzle games, I think you will like this aspect of Gravity Error.

While Gravity Error is more of a puzzle game than a platformer, there is still a decent amount of platforming in the game.

The platforming mostly involves moving around the stage with some jumping/evading obstacles thrown in. You usually are moving your character between gravity modifiers until they reach the exit portal. While the platforming is usually pretty easy, some levels do require some good timing in order to avoid hitting obstacles. For the most part the controls are tight so you really can’t blame your deaths on the controls.

One area that adds a little difficulty to the game occurs when the gravity changes. Since the keys don’t change when the gravity changes, you will encounter times when you need to press left, right or even down in order to jump. While this is a little disorienting at first, you adjust to it pretty quickly. I am glad that the game decided to handle controls in this way since the game wouldn’t have been the same if the keys changed to fit the normal control configuration.

The other factor that adds a little difficulty to the platforming is the fact that the gravity doesn’t change immediately. If your character is currently dealing with momentum when they hit the gravity modifier (you fall onto the gravity modifier), the game will slowly reduce that momentum before pushing your character in the new direction. This is really important when making jumps since you have to put the modifiers farther away from obstacles than you normally would in order to compensate for the momentum of the character heading into the modifier. I like this idea since it makes you put more thought into where you place the modifiers.

A Little On The Easy Side

My biggest problem with Gravity Error is the difficulty. I found Gravity Error to be kind of easy. Of the 50 levels I have to say that only a couple of the puzzles were a little challenging. Most of the puzzles I figured out almost immediately. These puzzles I either completed right away, or my failure was due to the timing/platforming aspect of the level. Even the puzzles that were a little more difficult weren’t that challenging. These puzzles took maybe a couple minutes to figure out.

The reason the puzzles are easy is that at least for me a lot of the solutions were pretty straight forward. With a lot of the puzzles you only have a couple gravity modifiers so there are only so many options that you can take to solve the puzzle. Generally I started out with the exit and worked my way back. Knowing where I had to get the character in order make it to the exit, I was able to then figure out how to use the other modifiers to get my character to that spot.

With all this said, your experience with the game could be different. I really like puzzle games so I end up playing quite a few of them. If you play a lot of puzzle games you end up developing strategies that make it easier to solve puzzles. This means that the game may be more challenging for other players than it was for me. Even if the game is easy, that is not always a bad thing. While the game might not always challenge you, with its’ easier difficulty I think it could work well as a game that you play when you just want sit down and relax.

According to my Steam profile, I put in around one hour and forty minutes to complete Gravity Error. In that amount of time I completed all of the levels and was actually able to get about 136 of the 150 pickups. This is without putting a ton of effort into trying to pick them all up on a level. If I were to go back and get the rest of the pickups that I missed out on I think it would take maybe another 15-20 minutes.

With a length of around two to two and a half hours. Gravity Error is not a long game. You will most likely finish the whole game within one or two gaming sessions. If you like longer games you will probably be disappointed with the length of Gravity Error. I kind of wish the game was a little longer since the game wasn’t getting repetitive yet and I would have gladly played more levels.

While Gravity Error is pretty short, the game is also pretty cheap. The game currently retails for $5 so you won’t need to break the bank in order to pick up the game. If you don’t like puzzle/platformer games it probably won’t be worth picking up at full retail price but I would look into the game when you find it on sale. If you do like puzzle games and don’t mind that it is on the easier side, I think you should consider picking up Gravity Error.

Overall I enjoyed my time with Gravity Error. The game includes some interesting puzzles and the controls work well. I wish the puzzles were a little more challenging though and that the game lasted a little longer. If you don’t like puzzle/platformers you probably won’t like Gravity Error. If you do like them though and don’t mind an easier difficulty curve, I think you will enjoy Gravity Error.