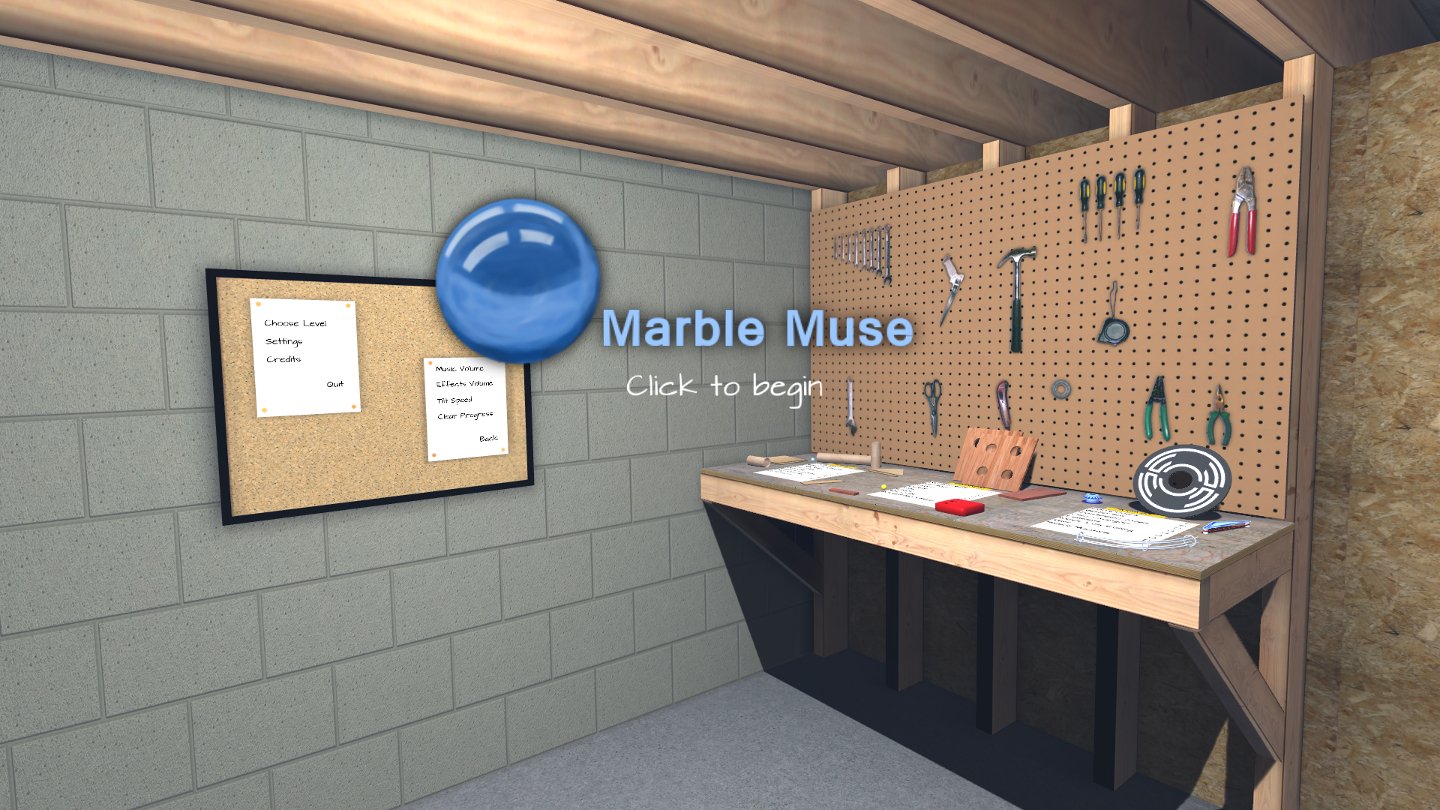 What Is Marble Muse?

I know a lot of marble-based video games have been made in the past but somehow I had never tried a single one of them until I saw Marble Muse on Steam. From the video and images included on the game’s Steam page, I thought it looked pretty good. However, I didn’t expect to enjoy it as much as I actually did (I thought it would be more like a solid three out of five type of game). While Marble Muse is a little short, it is a very good indie game with lots of great new ideas.

Like all marble games, the goal in Marble Muse is to tilt and move the course in order to get the marble to move through checkpoints (in this case you gather all of the stars scattered across the level) and eventually get to the end of the course. Marble Muse features 24 levels of marble rolling action, many of which can take up to five minutes (and several failed tries) to complete the first time. One of the many cool things about the game is that the levels actually have a bit of a story to them, you are following the production of a pinball machine from concept (first set of levels), to a prototype (second stage), to the final product (the last set of levels). The final level actually takes place on the finished product.

At first, the levels start off pretty easy. You just have to guide your marble across a cardboard surface to gather the stars (with very few ways you can possibly fail). However, obstacles and other mechanics are quickly added to make things more difficult. In the first set of levels, you will have to navigate your marble into cardboard tubes to gather stars that are floating in mid-air, guide the marble across very narrow paths (which are pretty much only as wide as the actual marble), and jump gaps. The second set of levels is very similar to a labyrinth game where you have to avoid holes and complete some courses that are almost maze-like. Bounce pads that your marble can bounce off are are also added in stage two. Finally, the last set of eight levels adds pinball bumpers (that can send you flying off the course), flippers, ramps, and even launchers (which you have to aim correctly to shoot your marble between platforms).

In terms of difficulty, Marble Muse is overall somewhat difficult but very fair. Some of the levels are easy to ace but you will also fail some of them multiple times. It is very cool that if you make a mistake you almost always have a chance to correct it (by flipping the table and having the marble land on the back side of the course then flipping it back to where it is supposed to be). Obviously you can’t make mistakes if you are trying to complete all of the challenges (one mistake will make it pretty much impossible to gold the level) but it is a neat mechanic that helps the game from becoming frustrating. There were a few times where I was almost finished with a level before my marble rolled off an edge. Luckily, I was able to save my marble and keep going instead of having to start the level over. The levels start off really easy but quickly ramp up in difficulty in the middle of the first set (the second stage also starts off easy before becoming more difficult). The odd thing is that while the first two stages have some somewhat difficult levels, the third stage is actually the easiest. I’m not even sure if I failed one of the levels a single time (though one level did take me over five minutes to complete).

One of the best things about Marble Muse is the awesome level design, especially later in the game. The third level in stage three is a labyrinth game where you periodically have to flip back and forth between the top and bottom of the course by deliberately going into some of the holes. The next level (3-4) looks almost like a record player with four “discs” spinning around in a circle. You have to guide your marble onto these spinning discs which oh, by the way, also have pinball bumpers on them that will bump you off if you hit them. Finally, the last level of the game takes place on an actual pinball table, which is an awesome finish to the game. The game is always throwing you another curveball and using different game mechanics in new and interesting ways in each level, keeping it from becoming boring. I can’t remember any levels that were even similar to each other.

Unfortunately, while the level design is amazing, there really aren’t that many levels in the game. I beat the 24 levels in about two hours. Obviously it will take me several more hours to complete all of the time trials and other challenges (which are actually very challenging, there isn’t a lot of room for error if you want to 100% the levels) but I loved the levels so much that I wish there were more. I have no idea if there are plans for more levels, either through DLC or (preferably) a level editor and the ability to share user-created levels, but I really hope there is. Marble Muse is a great game that is unfortunately just a little too short. Adding the ability to make your own levels (as long as there are enough players who want to do so) could add a substantial amount of re-playability to the game and increase the amount of hours you can enjoy it.

I do plan to go back and try to complete all of the challenges and 100% the game eventually (since I did have a lot of fun playing it and I do like a good challenge). Each level offers three different time trials (bronze which is reasonably easy to complete, silver which sometimes almost chops the bronze time in half, and gold which is very restrictive and will take several tries to complete), a secret marble that is hidden somewhere in each level (all of which have a different design like a basketball which you can then use to replace the default marble once you collect it), and a red star game mode that unlocks after your first playthrough (where you hunt for red stars that are usually on the reverse side of the main course). After you complete all of those objectives in a level, a challenge mode unlocks for that level. In the challenge mode, the marble moves twice as fast and you have an even tougher time to beat (less than half of the gold time). I have only 100% completed a few of the levels so far but I estimate that it will take at minimum three or four more hours to complete everything (so five to seven hours to 100% the game). As long as you want to go for the challenges, the added hours do make the price to hours played ratio a little more reasonable.

Except for the short play time, I have absolutely nothing negative to write about Marble Muse. The physics are sound (important for a physics-based game like this), the graphics are very nice for such a simple indie game (all of the art assets look great), and the music and sound design is solid. The only thing keeping Marble Muse from getting an even better score than a four out of five is its length. A large amount of indie games are pretty short, which I totally understand. Unlike AAA games, indie games are often made by one or two people who don’t exactly have the time or money to keep a game in production for years. Because of this, they sometimes don’t have the time to make a lengthy game. Marble Muse takes about two or three hours to beat (five to seven hours to 100%), which at a price of $9.99 (it is on sale for $8.99 at the time of this post’s publication) is kind of pricey especially if you don’t care about completing all of the challenges. Players that can’t spend a lot on games (or like games with high hours played per dollar ratios) and ones that don’t plan on 100% completing the game might want to wait for a slightly better deal. However, if you think the game sounds great (which it is), you will probably get your money’s worth.