In most circumstances I would never have even bothered looking at It’s A Dog’s Life. The game has so many signs that it is just another quick money grab to take advantage of people loving to look at cute dogs. Even though I knew there was a very good chance that I wasn’t going to like It’s A Dog’s Life, I decided to give the game a chance. I was hoping that the game came up with a clever way to use the dog theme and the game was only $0.50. Despite hoping for the best I should have listened to my gut since It’s A Dog’s Life is another example of an extremely generic party game.

How to Play It’s A Dog’s Life

Assemble the gameboard by putting the four puzzle pieces together. Place the cards by their corresponding spots on the gameboard. The players choose which spot to start the playing piece on. The players divide into two or more teams with at least two players on every team. Players decide how many points a team needs to win the game. The team with the youngest player gets to go first.

To start a team’s turn they roll the die and move the piece clockwise the corresponding number of spaces. The current team draws one card from the category of the space that the playing piece landed on. If the piece landed on a wild space the team gets to choose which category they want to play. The team will play the top card for the category and they will score points based on how well they do. 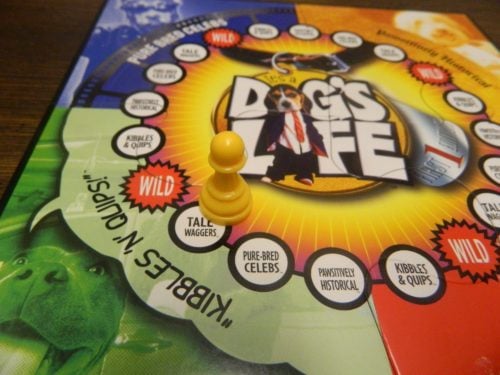 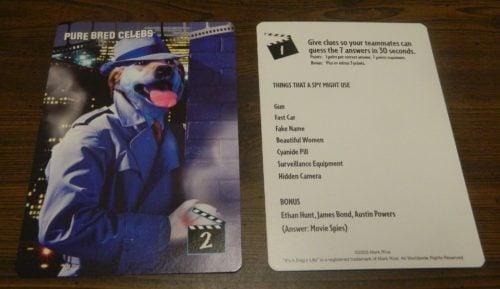 The team chooses one of their players to read the card. The player tells their team the category for the card. One of the players from another team turns over the timer and the round begins. The player reading the card begins describing the top word on the card. When giving clues the player cannot use part of the word in the clue and they can’t us a clue like “the word rhymes with _______”. The other members of the team keep trying to guess the word. If one of the players guess the word the team scores one point and they move onto the next word. The team can choose to pass on a word at any time. The round ends when the timer runs out. 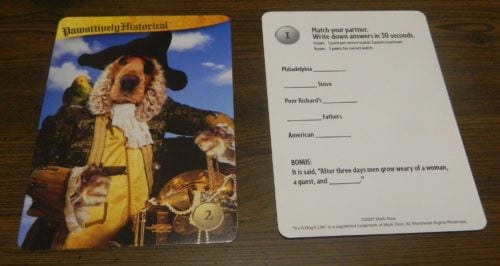 The team has nothing to lose from the bonus round. Both sets of players will fill in the blank for the prompt. If the two answers match the team scores five points. 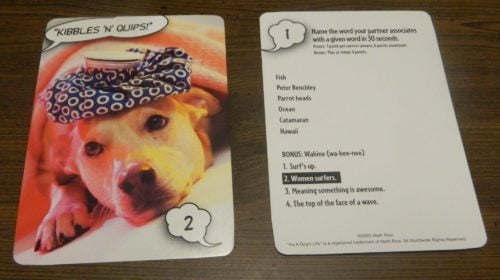 The team selects one player to read the card. They will read each word and write down the first word that comes to their mind. Once they have written down all of their answers the timer is flipped over. The reader reads the first word on the card and the other players try to guess the word that the reader wrote down for that word. The reader can only use hand gestures along with yes and no answers to respond to their teammates. If the team guesses the word they will score one point and the player moves onto the next word on the card. At any time the players can pass on a word to move onto the next word. The round ends when the timer runs out.

For the bonus round the reader gets to choose whether they think their team can guess the correct definition for the word on the bottom of the card. If the team chooses to attempt the bonus round, the reader will read the word and the four definitions. The team has 30 seconds to choose one of the definitions. If the team guesses correctly they score four points. If they guess incorrectly they lose four points. 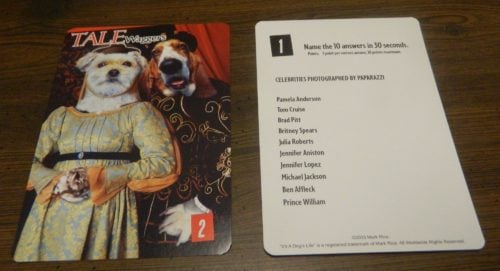 One of the players on the other team grabs the top card. The timer is flipped over and the player reads the category to the other team. The current team starts saying as many answers as they can that fits the card’s category. The team will score one point for every answer from the card that they come up with. The round ends when the timer runs out.

The Tale Waggers category has no bonus round.

The first team to reach the agreed upon number of points wins the game.

My Thoughts on It’s A Dog’s Life

Just because it doesn’t really have any unique mechanics doesn’t mean that It’s A Dog’s Life couldn’t have been a good game. There are plenty of games that have taken heavily used game mechanics and still made a good game by tweaking them or by building a good game around them. Neither applies to It’s A Dog’s Life though. It is basically the most generic party game you can ever find. I really can’t think of a single thing that the game does that I haven’t seen done in another game. The game’s execution is not particularly great either.

So let’s get to the one thing that could have been unique about It’s A Dog Life, its’ theme. Not surprisingly the game’s theme is all about dogs. While the game looked like a very generic party game I had hope that the game’s theme could overcome that fact at least a little. I assumed the game was going to do something with the theme when it came to the questions. I thought the questions and answers would somewhat revolve around dogs. That is not the case though. Basically the theme is used to put a cute dog photo on the back of the cards that loosely relates to the card’s category. The theme has absolutely no other impact on the game. I appreciate the cute dog pictures but the game’s theme feels really tacked on.

Other than being extremely generic, one of the biggest problems that I have with It’s A Dog’s Life is the difficulty of the cards. Looking at the box you would assume that the game would be really easy. That is not really the case though. The game is easy to play but it is surprisingly hard to score points in the game. In many rounds a team may only score a couple points. The reason that the game is more difficult than you would think is that for a lot of cards it is hard to be on the same page as your teammates.

I think the biggest problem with the difficulty is the significant variance in difficulty between two cards. One card from a category can be pretty easy while another is really hard. All trivia and party games like this suffer a little from some questions being harder than others but this seems to be a big problem in It’s a Dog’s Life. I don’t like wild differences in difficulty because it just adds more luck to a genre of games where you shouldn’t really have to rely on luck. One team could easily win the game because they were given easier cards than the other team.

Component wise there isn’t a lot to say about the game. As I already mentioned I really liked the cute dog pictures featured on most of the cards. The component quality in general is fine but also nothing special. I think the gameboard could be a little larger but it is not a big deal. The biggest issue I have with the game is the number of questions included in the game. The game only includes 200 cards with only 50 cards for each category. This means that you will encounter repeats pretty quickly. I am guessing few people would want to play the game enough to go through all of the cards but there is still a lack of replay value in the game.

Should You Buy It’s A Dog’s Life?

It’s A Dog’s Life is just not a very good game. It plays like basically every other party game where you try to match your teammates. Outside of the cute doge pictures on the cards I can’t think of a single thing that the game does that I haven’t seen done in many other party games. In addition to lacking any originality the game suffers from some questions being significantly more difficult than others. Some cards will be surprisingly easy but a lot of the cards are harder than you would expect. This adds luck to a genre of games that should have little reliance on luck.

If you would like to purchase It’s A Dog’s Life you can find it online: Amazon