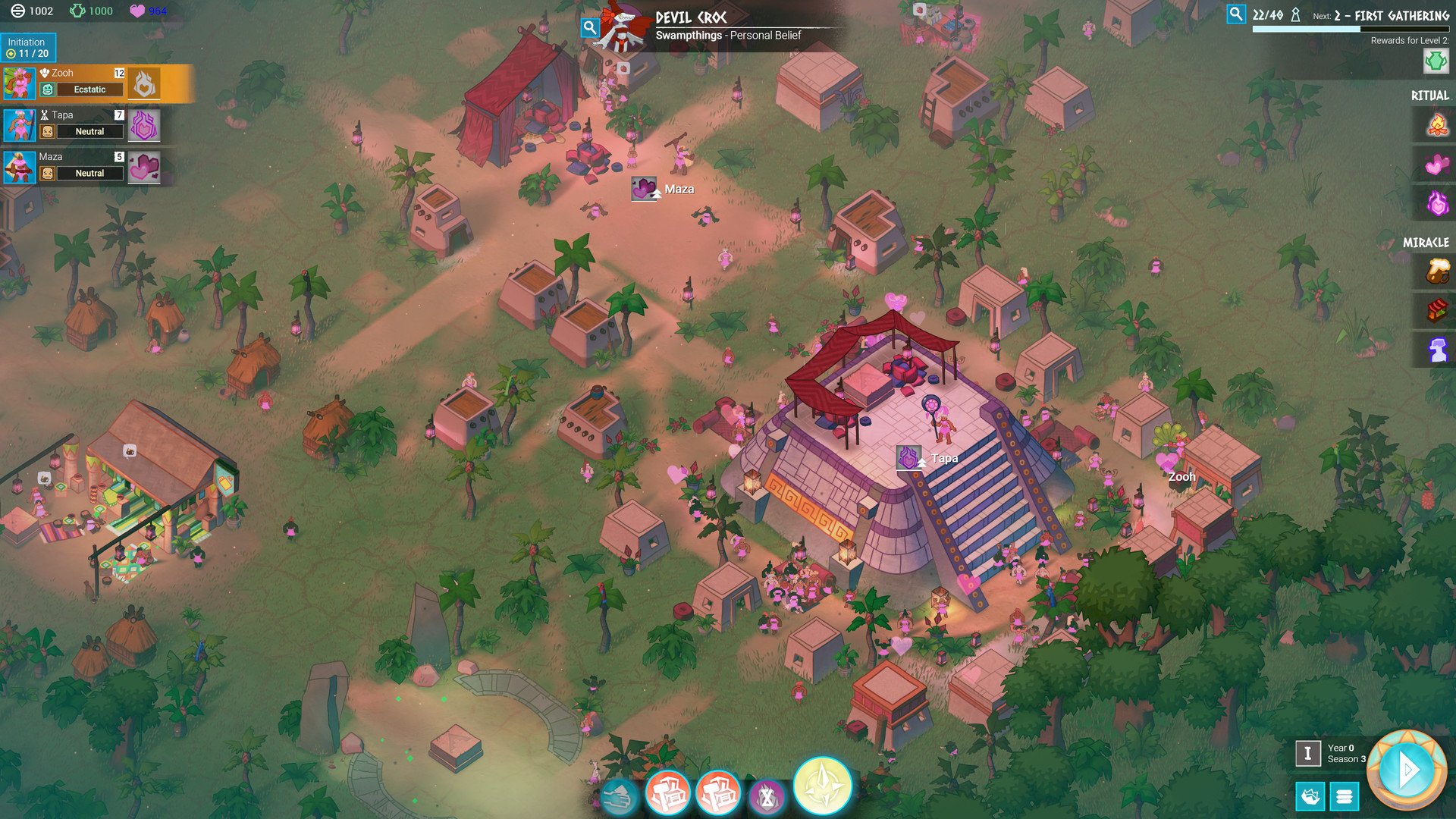 The god game genre has always been more of a niche video game genre that has a pretty dedicated following. Basically in god games you play as an otherworldly force/god that has immense power. The gameplay usually involves you using your godly powers in order to indirectly influence your followers to expand and grow your power/reach. In this preview I am looking at a new game in the god game genre that is entering early access today, Godhood. Godhood is being developed by Abbey Games who in the past has created Reus and Renowned Explorers: International Society. In Godhood you create your own religion/god and use your followers to strengthen it to convert other followers. Godhood has the framework in place for a fun and engaging god game that needs a little tweaking to reach its full potential.

In Godhood you play as a god. You begin the game by setting up some basic information about your god which includes choosing what your religion will be based around. At this point you can choose between a religion based on peace, war, lust or chastity. You are then given your first follower and the game begins. The gameplay of Godhood can basically be broken down into two main mechanics.

First there is the village gameplay which kind of plays like a city builder. As your religion grows you will unlock new buildings which you add to your village. Each of these buildings gives a benefit to your village. While at your village you have the ability to instruct up to three of your disciples at a time. To instruct one of your disciples you choose which one you would like to command and then which building you would like them to pray at. When prayed at buildings will upgrade the disciple directly, help recruit more followers, or give you resources that are used to expand your village. As your disciples gain experience/power they can also perform miracles at your buildings which improves their stats for the combat aspect of the game. For the most part the village aspect of the game is used to build up your disciples stats as well as helping to acquire more followers.

You want to build up your disciples for when you send them out into ritual combat. When you are ready to find more converts you will choose one of the neighboring villages in order to spread your religion. After seeing the disciples for the village you are trying to convert, you get to choose three of your disciples to send into combat. The battle then begins and you no longer have direct control over what happens. Each of your disciples will have a virtual “die” which is rolled at the beginning of their turns. The symbol that is rolled determines the attack that the disciple will use. These abilities are improved and changed by what you did with the disciple back in your village. Each disciple also has their own class which impacts combat as each class has a class that it is strong and weak against. Each team takes turns having all of their chosen disciples attack the other team until one team’s “hit points” are reduced to zero. If you win the fight you take control of the village and receive other rewards which includes gaining followers, powerful relics, or other benefits.

For the most part I enjoyed my time with Godhood. The game is a really interesting combination of different mechanics which makes the game feel pretty unique. It feels like a combination of a city builder and a turn based strategy game. It has elements of both genres and yet plays quite a bit differently than both. The gameplay loop begins in your village where you command your disciples to gather resources and improve their skills. These resources are used to improve the village with buildings that can further develop your disciples. The village aspect of the game is mostly used to train up your disciples in order to send them out into combat. While I think the village aspect could use a few more mechanics, I had fun with it as you can noticeably see how expanding your village improves your disciples.

The meat of the game though is found in the combat. The combat is a little strange at first as it doesn’t feel like you have a lot of control over what happens in it. You basically choose who will enter the fight and then sit back and watch who ultimately comes out as the victor. Initially it seems kind of random as whoever rolls the best attacks will win the fight. While this is true, most of your impact on the fight occurs before the fight even begins. You can impact the combat in two ways.

Second you need to create a well rounded team of disciples. As I mentioned earlier every class has a class that it is stronger and weaker against. This kind of reminds me of rock, paper, scissors or even the Pokemon battle system. If you only focus on one class of disciples you are going to have trouble in fights which include disciples of the class that they are weak against. Therefore you want to build up a team featuring many different classes. If you do this whenever you enter a fight you can manipulate the advantages and disadvantages of the other team in order to make the fight easier for yourself.

At first I will admit that I wasn’t a big fan of the combat. As I continued to play the game though it started to grow on me. When you realize that most of your impact on the combat comes before the fight even begins, you begin to appreciate that there is some strategy to the fighting system. When you do a good job training your disciples and taking advantage of their strengths and weaknesses, you can destroy a team that is considerably stronger than your own.

Ultimately Godhood is the type of game that takes a while to adjust to. I will admit that I wasn’t a huge fan of the game when I first started playing it. It is one of those games that start to grow on you the more you play it though as you figure out the game’s deeper strategy. I had quite a bit of fun playing the game. Godhood’s gameplay is probably not going to be for everyone though. If you have read this far and Godhood doesn’t sound that interesting to you, it probably isn’t the game for you. If it sounds interesting to you though, I think you will enjoy Godhood. At this point I think Godhood has a really strong foundation where it could develop into a really good god game.

In addition to the gameplay I think Godhood does a really good job with the atmosphere/theme. The game’s graphical style utilizes a hand-painted art style. The game looks great while bringing a unique style to the game. The art style and relaxing music do a good job setting the mood. Godhood is meant to be a game with a more laid back feeling. As the game doesn’t rush you to make any decisions, Godhood is the type of game that you can just sit back and enjoy instead of having to stress about making quick decisions.

While I had fun with Godhood there are a couple issues that I hope get fixed through the early access process.

First Godhood could probably do a better job explaining parts of the game. In some ways the game does a good job explaining what you are doing. Whenever you unlock a new mechanic in the game you are given a small tutorial on how the mechanic works. Other parts of the game are never fully explained though. The biggest area where this is the case is the combat and choosing how to develop your disciples. This leads to some trial and error where you have to figure out these mechanics on your own. You eventually start to grasp the different mechanics, but Godhood isn’t a game that you can jump right into and know what you are immediately supposed to do. As Godhood just entered early access this is not all that surprising as many early access games don’t have great tutorials. I hope this is something that gets addressed before the final version of the game though.

The other concern I have at this point is that there isn’t a ton to do in the game. At this point you just build up your village, develop your disciples and then attack neighboring villages. This is fun but I think the game could use a little more content. Most playthroughs of the game are supposed to take between two and four hours. You can then move onto playing one of the other three types of religion. The main reason that I think the game could use something more is that I think the game could get a little repetitive after a while. While the game has four different types of religion that you can create, it feels like the main gameplay isn’t going to change much between all of the religions. Therefore once you have played through one religion, the others should be pretty similar. I don’t know exactly what the game should add, but it feels like Godhood is missing a couple of mechanics that could add some more variety to the game.

For an early access game I would say that Godhood is pretty stable. The game did crash once, but otherwise I didn’t have many issues with the game playing correctly. If your computer is closer to the minimum requirements you may encounter occasional framerate issues. Even with a weaker computer though Godhood plays pretty well most of the time. I did encounter a few occasional bugs but nothing too serious outside of the one crash. For example while battling your disciples will make comments. Their text will regularly stretch outside of their speech bubbles. Most of the bugs in the game are little cosmetic issues like this that don’t really impact the gameplay all that much.

Godhood is an interesting game as it honestly wasn’t what I was expecting. While it takes a while to adjust to it, Godhood has the framework in place to be a fun and unique god game. What is interesting about Godhood is that it combines a city builder with a turn based combat system. You build up your city to improve your disciples. You then send out your disciples in order to convert other villages. The combat is interesting as you don’t have any direct control over the actual fight, but instead impact it by training your disciples and taking advantage of their strengths and weaknesses. This won’t be for everyone but I enjoyed it. I will say that the game could do a better job explaining some of the mechanics as at this point it is more of a game that you learn as you play it. The biggest thing that the game needs to address in early access though is that it needs more content. The game has a great framework, but I fear that the game will get a little repetitive after a while if the developers don’t add in a few more things to do.

Basically my recommendation for Godhood comes down to your thoughts on the game’s concept. If you aren’t really into god games or don’t think the concept sounds that interesting, Godhood probably won’t be for you. If you are intrigued by the concept but are still a little unsure, I would maybe wait a while until some more content is added to the game. If Godhood sounds really interesting to you though, I think you should pick it up.