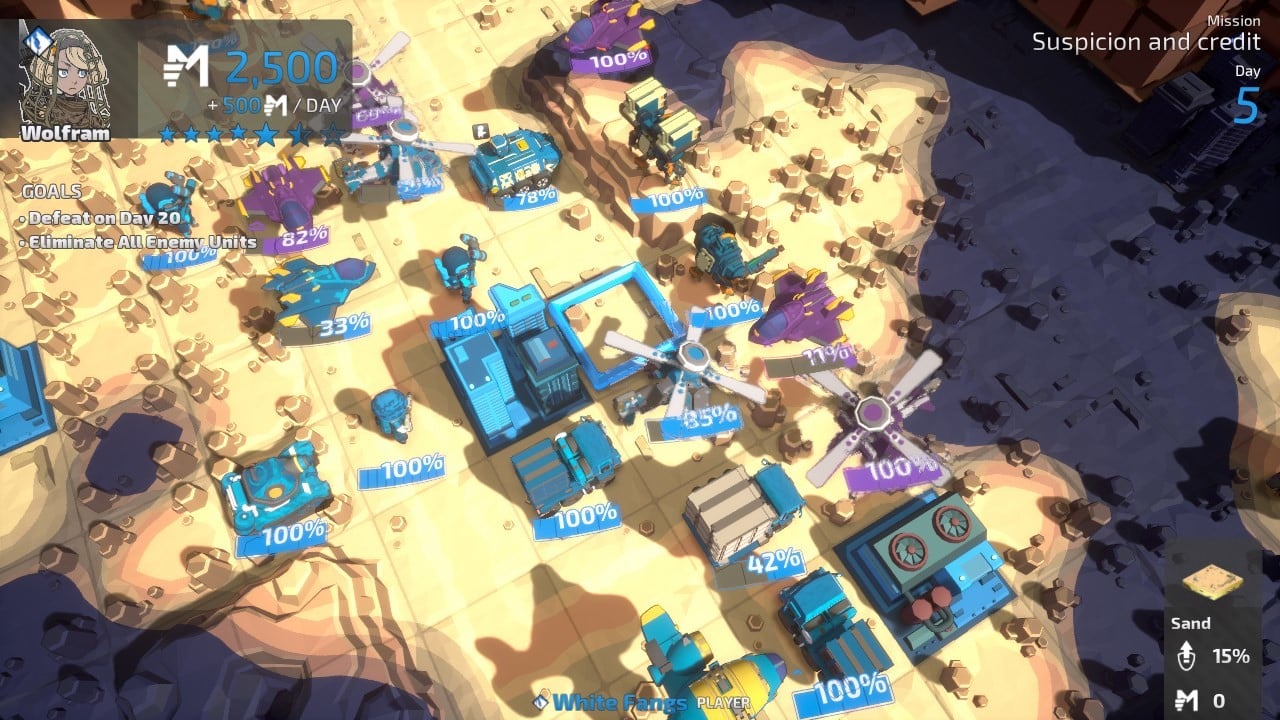 In Tiny Metal: Full Metal Rumble you play as a commander in control of an army. The combat in Tiny Metal: Full Metal Rumble is turn based and takes place on a grid. Each unit is controlled individually and you will get to take an action with every unit before your opponent gets to take their turn. For each unit you first choose which space on the grid you want to move the unit to and then you choose its ending orientation. If the unit is next to or within the target range of an enemy unit you can then attack. The amount of damage you deal depends on the two types of troops in combat, the health of the two units, and any defensive bonuses based on the terrain that both units are on. You also have the option to set up several units to attack at the same time using the Focus Fire action. If you deal enough damage to destroy a unit it is removed from the map. If you don’t fully destroy the unit though, it will have the opportunity to counter your attack. The goal in most levels is to either destroy all of the enemy units or capture the other enemy’s headquarters.

In addition to combat the other major mechanic in the game is capturing and controlling various cities situated around the stage. Controlling the cities is really important to the game as it is how you replenish and expand your army. Each city you control gives you currency that you can spend to purchase additional troops. The currency you earn is used in the factories and airports you control in order to train new troops to aid in your fight. In addition to attacking your opponent you need to spend time capturing cities along the way or you won’t have enough money to purchase new troops to make up for the ones you lose in combat.

Fans of Advance Wars will probably notice that this sounds quite familiar. It should as it is pretty obvious that Tiny Metal: Full Metal Rumble was inspired by the Advance Wars series. I am not familiar enough with the Advance Wars series to note all of the areas where the games are similar and different, but it is pretty obvious that the two game series share quite a bit in common. While Tiny Metal: Full Metal Rumble doesn’t revolutionize the genre, it didn’t really have to as long as it did a good job recreating what works for the genre.

While I haven’t played a lot of games in this genre of strategy games, I actually had quite a bit of fun with Tiny Metal: Full Metal Rumble. The reason I liked the gameplay is that it does a good job finding the right balance simplicity and strategy. The gameplay is pretty straightforward and the game does a good job teaching you the mechanics throughout the early missions. There is a also decent amount of strategy as well. Each unit in the game has units that it is strong and weak against. You must use this in addition to terrain benefits in order to defeat your opponent’s units. You can’t just focus on attacking your opponent though as you need to capture and defend cities in order to earn money to grow your army.

The gameplay in Tiny Metal: Full Metal Rumble is quite satisfying. You will start a level and an hour will pass and you won’t even notice. If you have never been a fan of turn based strategy games, Tiny Metal: Full Metal Rumble won’t be for you. People who like this genre though should really enjoy the gameplay. The only concern I have with the gameplay is that it might become repetitive after a while. Once introduced to all of the units most players are going to develop a strategy/units that they prefer. They will then utilize the same strategy most of the time. This could get repetitive after a while where the levels begin feeling like more of the same. For this reason I think Tiny Metal: Full Metal Rumble is the type of game where you will play one or two levels every couple days.

Tiny Metal: Full Metal Rumble has three main modes. At this point I have mostly checked out the campaign. The campaign mode is basically what you would expect it to be where you play different levels interspersed with story scenes that keep the plot moving. Most of the levels in the campaign are your basic levels where you need to destroy all the enemy units or capture the enemy’s headquarters. There are a few unique levels though where there are special tasks that you have to accomplish. I can’t give you a definitive length for the campaign. Based on my experience though you won’t be disappointed with the length. The campaign apparently has 39 missions. I have been playing the campaign for around 7-8 hours and I am probably not quite to the halfway point yet. Fans of the original Tiny Metal or these type of games in general should really enjoy the campaign mode.

The one issue I had with the campaign has to do with the enemy AI. The game’s difficulty seems to vary quite a bit. I ended up playing the campaign on normal difficulty and never really encountered a situation where I was close to losing a level. Meanwhile the skirmish maps seem to be quite a bit more difficult. The reason why the levels can be quite easy is because if you take time to capture cities you will have enough money to replenish the units you end up losing. No matter how good your strategy is, you can eventually just overpower the enemy AI. It doesn’t really matter how many units you lose as you can replace them quicker than your opponent.

Most of the difficulty in the campaign comes from the different challenges that each level presents you with. Each level in the game gives you three challenges to complete. For the most part these challenges put restrictions on you in order to make the levels a little more challenging. Some of the challenges include not losing any units, not purchasing additional units of a given type, and not summoning any hero units. All of these challenges are optional. Each challenge you complete though earns you money which you can use to purchase music, background story information, and levels to use in the skirmish mode. I like the addition of the challenges as it allows you to easily adjust the difficulty to your own desired level.

As I mentioned earlier I never played the original Tiny Metal. I bring this up because it might have something to do with me not being a huge fan of the story. In the campaign you will control three different commanders who need to fight back against a new growing threat. Basically I didn’t find the story to be bad, but it never really captured me either. The story felt kind of generic as it was obvious that the game took heavy inspiration from other games in the genre. I didn’t really find the story to be a selling point, but fans of these type of stories will probably enjoy it.

In addition to the campaign mode, Tiny Metal: Full Metal Rumble has both a skirmish mode and an online mode. The skirmish mode mostly entails different levels you acquire throughout the campaign and by completing challenges. This mode is pretty much the same as the campaign outside of the story elements. The game apparently has 77 different skirmish maps. With most maps taking at least 30 minutes to an hour to complete, the skirmish mode alone gives you a lot more content. As I didn’t really test out of the multiplayer mode, I can’t really comment on it that much. Basically the mode lets you play against friends and other players online.

For the most part I thought the game’s visuals were pretty good. While the game is about war, due to using a cartoony/exaggerated graphical style it is less serious than your typical wargame. I liked the game’s graphical style as it looks nice and brings its own unique style to the game. The game’s units and environments are detailed. The graphical style is simple enough that the game is still playable on less powerful and older computers. If your computer is close to the game’s minimum settings though you might encounter some occasional framerate issues. As the game is a turn based game though, the occasional framerate issues don’t impact the gameplay.

As far as replay value if you enjoy these types of games, you will get your money’s worth out of Tiny Metal: Full Metal Rumble. As I mentioned earlier I have been playing the campaign for around 7-8 hours and are not quite through even half of the campaign. I would guess that the campaign should take at least 15-20 hours, but might end up even longer than that. On top of that the game includes the skirmish and online modes. If you are at all interested in these type of games you should have no trouble getting enough playtime out of the game.

While it is pretty obvious that Tiny Metal: Full Metal Rumble is heavily inspired by Advance Wars and other similar strategy games, it is more than just another generic clone. I think the reason that the game succeeds is that it does a great job balancing between being simple enough and giving players enough strategic options. You can pick up the gameplay quickly and yet have enough strategic options. This leads to the game being really fun and surprisingly satisfying. This is combined with the game having a lot of content where you will definitely get your money’s worth. I think the game will get a little repetitive after a while though where you will only want to play a level or two every so often. The AI is also kind of hit or miss as sometimes it is really easy and other times it can be pretty challenging. The story while not bad is also a little underwhelming.