The player who won the last game or can say the word “Brains” with the most feeling gets to start the game.

The game includes three different colored dice. The green dice are the easiest to roll a beneficial symbol with. The yellow dice are moderately difficult and the red dice are the hardest. Each dice has three different symbols. The brain symbol indicates your zombie ate a brain which is worth a point. The shotgun symbol means your zombie was hit by a bullet. A footprint means that the human escaped which means that the die will be re-rolled if the player chooses to re-roll the dice. 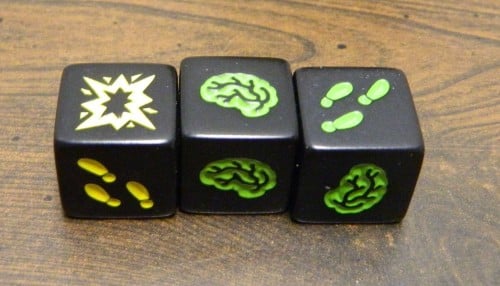 In their first roll the current player rolled one brain symbol, one shotgun symbol and one footsteps symbol. The brain and shotgun dice are set aside while the footsteps die will be re-rolled if the player chooses to re-roll the dice.

After their second roll the player has rolled three brain symbols and two shotgun symbols. If the player quits at this point they will score three points for the round.

Players can keep rolling dice until they either decide to quit or they roll a third shotgun symbol. If they rolled three shotgun symbols, they score no points for the round. 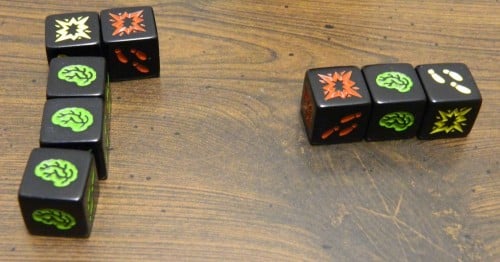 The player chose to roll the dice again and they rolled a third shotgun symbol. The player’s turn ends immediately and they score no points for the current round.

If a player uses all of the dice and want to continue rolling, they take note of how many brains and shotgun blasts they have rolled and they put all of the dice back into the cup to draw new dice.

When one player has scored at least 13 points the final round begins. If all of the players haven’t had the same number of turns, the rest of the players get one more turn. After everyone has had the same number of turns the game ends. Whoever has rolled the most brains wins the game. If there is a tie, the tied players play an additional round and whoever rolls the most brains in the tiebreaker round wins the game.

After being featured on the first season of TableTop (video link) I have wanted to try out Zombie Dice. The game has always been really cheap but I resisted picking up the game because it was just a press your luck dice rolling game. After finding the game at a thrift store for a couple dollars I finally picked it up. While Zombie Dice is good for what it is, I have to say that I was a little disappointed with the game.

Basically Zombie Dice is your typical press your luck dice rolling game. You roll some dice and then decide whether you want to keep your score or if you want to risk it in order to roll more dice which might increase your score but also risks losing all of the points you had already acquired. That is pretty much all there is to the game. If you like these type of games you will probably enjoy Zombie Dice but if you don’t you probably won’t like the game.

The biggest problem I have with Zombie Dice is there are next to no decisions to make in the game. The only decision you make is whether you want to press your luck or quit. In most cases this is pretty obvious. If you have no shotgun symbols you should roll again and if you have two shotgun symbols you should probably quit unless you have few/no brains or it is the final round of the game and you aren’t currently winning. This means that most of the time your decision is already made for you.

In addition of the lack of decisions, Zombie Dice relies almost entirely on luck. Unless you make an unwise decision (going for it when you already have two shotgun symbols) your decisions have little impact on who wins the game. Your success in the game relies almost entirely on how lucky you are rolling the dice. If you roll well you have a good chance to win and if you roll poorly you are going to lose. There is no way you can mitigate that through strategy.

Zombie Dice also adds more luck to the game than your typical dice rolling game. This comes from the fact that you draw your dice randomly before you roll. Since some dice are better than others, if you keep drawing yellow and red dice you are at a distinct disadvantage over the other players. A player that consistently draws poorly has to roll almost perfectly just to stay competitive with players that keep drawing green dice.

While I don’t like that the different dice add more luck to the game, I actually like the idea behind the different colored dice. The different dice add something new to the dice rolling genre. The different colored dice can actually influence your decision of whether or not to keep rolling since you can figure out how good your odds will be of rolling more shotgun symbols. If you have to roll a bunch of red and yellow dice in future rolls you are more likely to quit since your odds of losing all of your points have increased significantly.

Zombie Dice is good at what it is, a press your luck dice game. I had fun with the game but I wish there was more to it which would make it stand out from other dice rolling games. Zombie Dice is still probably one of the better dice games that I have played though. The game is really quick to play and teach to new players. You could probably teach the game to a new player in a minute or two and a game shouldn’t take more than five to ten minutes to finish.

Overall I thought the contents were pretty good. The dice are pretty good and I like that all of the symbols are engraved which will let them last longer since the symbols won’t fade off. The game should have come in a larger dice cup though. Unless you have tiny hands there is no way you can easily fit your hand inside the cup. This makes it kind of hard to pick dice from out of the cup.

As I already mentioned Zombie Dice is a pretty cheap game. You can regularly buy the game online for less than $10. If you are looking for a cheap filler game, Zombie Dice would probably do pretty well.

While Zombie Dice was a little disappointing, it is pretty much what you should expect from a press your luck dice game. The game plays really quick and is easy to teach. Unless you hate dice games you will probably have some fun with the game. On the other hand the game has very few decisions that you can make and the game relies almost entirely on luck which provides no opportunities for strategy.

If you are looking for a quick filler game and don’t mind dice games I think you will probably enjoy Zombie Dice. If you generally hate dice rolling games I would recommend staying away from Zombie Dice.

If you are interested in purchasing Zombie Dice, you can purchase it on Amazon

In your example you could not re-roll after the second roll as you had no feet. You can only re-roll if you have at least one feet die.

According to the rules included with my copy of the game that is not the case. Maybe the rule changed between versions of the game? The only part of my instructions that mention a player's turn ending are as follows:

If you rolled three shotguns, your turn is over. Otherwise you can choose to stop and score, or continue.