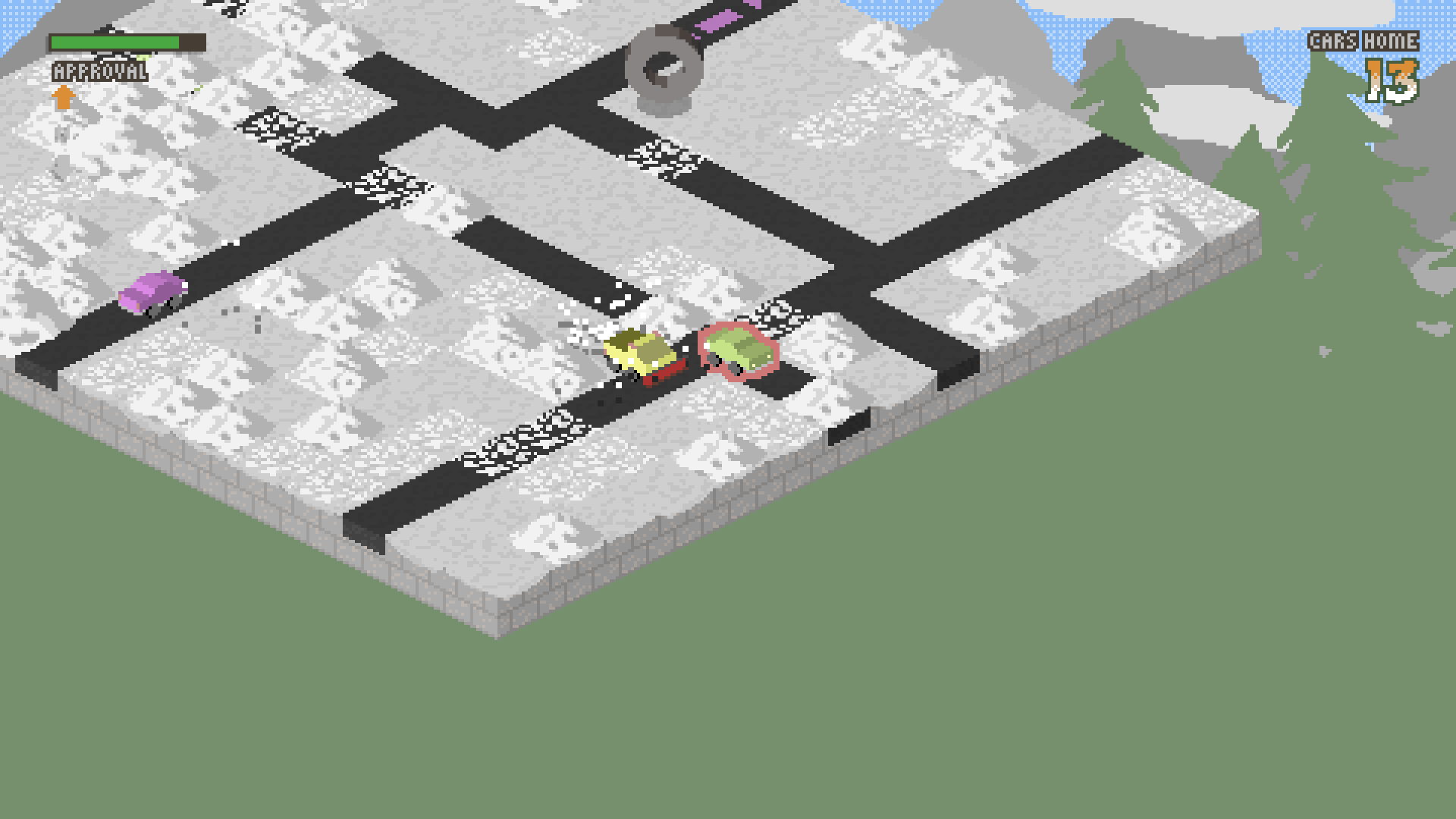 In Dawn of the Plow you work as the local snow plow driver. The latest blizzard has hit town and the roads are getting covered with snow. You must clear out the streets so the residents can get home.

Basically you drive around part of the city clearing the roads that get covered with snow. All you need to do is drive over a patch of road that is covered with snow in order to clear it. Dawn of the Plow includes a couple driving mechanics. You can put the car into drive or reverse. In order to turn you need to put in a command to turn the car left or right. Shortly after putting in the command the car will turn in the desired direction.

This may seem easy but the residents of the town aren’t going to sit around waiting for you to clear the roads. If the residents are stuck behind a snow pile their satisfaction meter will go down and if it falls too far you will be fired/game over. No one likes to get hit either so if you hit any of the other cars while plowing the streets you are immediately fired.

To help you with your task the game includes a couple different power ups. One power up will let you use salt to clear all of the snow from a particular area and prevent snow from falling in that area for a while. One power up will give you more control over your vehicle when driving through snow while another temporarily strengthens your plow making it much easier to plow through larger piles of snow. The final power up increases your satisfaction rating so you aren’t fired for a low satisfaction rating.

With winter fast approaching one thing many people are probably dreading is the snow that will soon start falling. If winter wasn’t coming soon enough for you, you can get a jump on it by playing the newly released Steam game Dawn of the Plow released yesterday on Steam. While the game is pretty simple and I wish it had a few more mechanics, Dawn of the Plow is a surprisingly addicting game.

The controls in Dawn of the Plow are kind of interesting. I know they are going to frustrate some people because they aren’t what I would call precise. This would usually drive me nuts since I hate imprecise controls. The controls are imprecise on purpose though to simulate driving through snow. Your car will slip and slide and it takes a while to turn so you need to start turning before you normally would.

For the most part I liked the controls. They work well for the theme since it actually feels like you are driving through snow. The game would also be kind of dull if the controls were precise since the game would be too easy. The problem I have with the controls is that I think the game went a little too far making you car slip and slide all over the place. I think this could have been fixed if the plow would turn a little quicker.

While the game might look easy it is more difficult than you would first expect. This is mostly due to the aforementioned controls. It takes some time to adjust to the controls but once you get the timing down you can do a lot better in the game. Expect to be fired often though.

The hardest part of the game though is when cars get stuck behind snow piles. This is difficult because you can’t even tap one of the other cars without getting fired. While you can use your truck’s horn to somewhat make the cars move away from a pile, it is sometimes really hard to position your truck to clear out a section of the road without hitting a car. This gets even harder when multiple cars are surrounding the same pile.

Overall the power ups are interesting. The salt mechanic is the best in my opinion since it can really help you out when an area is filled with snow. Instead of having to collect the power up though I kind of wish the game would have given you a couple opportunities to use it from the beginning. This would have let players choose when they wanted to use the salt.

While I have only played Dawn of the Plow for around 1-1.5 hours, I have had fun playing the game so far and at times it is addicting. I kind of wish it had a few more mechanics though. While the game is fun for a while, it is not the type of game that I would play for hours at a time. I would be more inclined to play the game for 15-20 minutes at a time and then come back to it at another time.

How much value you get out of Dawn of the Plow will depend on what type of gamer you are.

If you are the type of gamer that just likes to play a game to completion and then move onto something else, you probably won’t get a lot of time out of the game. You can unlock all of the levels/modes within 30 minutes so it doesn’t take long to “beat” the game.

How much time you get out of Dawn of the Plow will depend on which group you find yourself in. I generally would put myself into the first group but for Dawn of the Plow I can see myself more in the second group. I have only played the game for around 1-1.5 hours but it is the type of game that I will come back to every so often.

At $3.99 the game is pretty cheap so even if you don’t get a lot of time out of the game, it should be pretty easy to get your money’s worth.

Should You Purchase Dawn of the Plow?

Overall Dawn of the Plow isn’t the deepest game but it doesn’t really have to be. The game is an example of a simple unique game mechanic that leads to a pretty fun game. I wish the game had a little more variety but it is the type of game that you will bring out from time to time for 15-20 minutes.

If the game’s concept doesn’t really interest you, the game probably won’t change your mind. If the game looks interesting to you though I think you should have quite a bit of fun with the game and I would recommend that you pick it up.