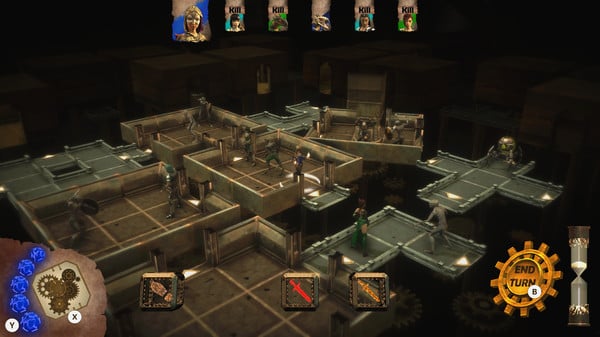 In The Living Dungeon you get to control your characters along with the dungeon itself.

The single player campaign follows a bunch of characters that have made their way into a strange dungeon/catacomb in the middle of a city. The dungeon presents many dangers but also opportunities for riches.

The main mechanic in the game involves rolling dice and moving your characters around the dungeon either killing all of your enemies or succeeding with some other objective . You roll five dice and the symbols that are rolled determine what actions you can perform on a turn. Two of the symbols on the dice include a melee and a ranged attack. Rolling multiple symbols of the same attack allows players to perform a more powerful attack which is necessary for killing some of the stronger enemies. Some symbols on the dice allow different types of movement around the game board and some let players acquire gems/jewels that they can later use to re-roll some of their dice.

In addition to dice rolling the game has a card element. When rolling dice players may occasionally roll a symbol that will give them a card that they can use. During each turn a player can use one of their cards to perform an action that benefits them or hurts the other players. Each card has only one use though so players need to be careful deciding when they want to use a card’s ability.

The one mechanic that really distinguishes The Living Dungeon is the ability for players to manipulate the board itself. Each board is comprised of tiles that have spaces players can and can’t move on. Two of the symbols on the dice allow players to rotate or tilt tiles on the game board. A rotate symbol allows a player to rotate any tile 90 degrees clockwise or counterclockwise. Tilting allows players to flip over a tile to the other side which will have a different layout and can be used to cut off or kill other players.

All of these mechanics are timed so you need to move quick. Each character only has two minutes to use up all of the symbols they rolled or they forfeit the rest of their turn.

While it is lacking polish, The Living Dungeon is an above average tabletop adventure game that adds some unique elements to the all too familiar dungeon crawl game.

Being an avid board gamer I am always interested in checking out new “board game” video games when they are released on Steam. There are quite a few games on Steam that are dungeon crawls where you move your characters around a dungeon and try to kill the other players/enemies. This element of The Living Dungeon works perfectly fine but it is not highly unique or original. You roll dice and perform actions based on what you rolled.

The one thing that really interested me about The Living Dungeon was the ability to manipulate the dungeon itself. This element of the game works quite well usually. For some reason it is just satisfying tilting a tile that knocks enemies off the board killing them. Being able to rotate tiles presents a lot of strategic options. You can rotate a tile in order to prevent another player from attacking your characters or you can rotate a tile in order to create a path for you to kill your enemies.

This concept usually works well except that I don’t think the game went far enough with it. I am not sure exactly what the game could have done but I wish there were some additional symbols on the dice that would allow you to manipulate the dungeon itself. While the game might have done this on purpose, I wish the game would show you what was on the other side of a tile before you tilted it. Unless I was missing something you pretty much just need to take a chance when flipping over a tile. There could have been a lot more strategy in the game if you could see what you were doing before you tilted a tile.

At this time I have played the game for a couple of hours. I have only played the single player so far due to the online multiplayer not currently being available (more on this soon). The single player is solid overall. For the most part the single player missions fall into two types. Most of the missions involve either killing all of the enemies on the game board or reaching an escape point. I am not close to finishing the single player so this might change later in the game and I hope it does because these mission structures will probably get repetitive after a while. The missions that I really liked were the missions that were more like a puzzle. Some of the better missions in the game involved either killing a specific character in one turn or killing all of the characters in the same turn. These missions were really interesting since they really made you think about your moves before you made them. I hope the later parts of the game have a lot more of these type of missions.

While the single player game works well for the most part, the multiplayer is where the game’s potential would really come out. The AI for the most part is solid in single player but it does occasionally make some dumb decisions that result in the AI characters killing themselves. Unfortunately at this time the online multiplayer doesn’t work so you can only play the game against other players locally. The developers claim that online multiplayer should be added soon. I hope so since playing against other human players should lead much more of a challenge since they should have better strategies than the computer.

While The Living Dungeon is a good game, it is not a perfect game. While it is very impressive that the game was made by two people, in some instances it shows. While the graphics are pretty good, some areas could probably have used a little more work. The story shows potential but starts a little slow. The voice work is a little hit and miss. I give the developers credit though for providing voice work for the whole game. I also encountered some bugs while playing the game which included not being able to kill some enemies when I should have been able to and the game locked up at one point.

Some other quick thoughts about the game:

While I have only played The Living Dungeon for a couple hours, I think you can get a lot of playtime out of the game. The game’s Steam page says the single player campaign lasts 30 hours and while I am far from confirming that I think that number is probably pretty accurate. The real longevity of the game will come from the multiplayer especially when the online multiplayer is added to the game.

With the game retailing for $24.99 the game is not cheap but it is not a bad value either. If the single player ends up being 30 hours and you play the multiplayer you could probably get at least 40 hours out of the game which is a good value since you are paying less than a $1 per hour. If the concept really interests you I think you will get your money’s worth out of the game. If you are only somewhat interested in the concept though I would maybe wait for a sale on the game.

Should You Purchase The Living Dungeon?

While not perfect, The Living Dungeon is an above average to good game. The mechanics allowing you to shift/change the dungeon are interesting and add quite a bit of strategy to the game. The game provides plenty of content since you could probably play the game for at least forty hours. The game does lack some polish though which keeps it from being great (this is to be expected from a game developed by two people).