The object of the game is to be the first player to win three rounds.

Set up the tree. When the tree is assembled, turn on the tree and wait until it pops up. Everyone grabs the launcher and all of the frogs of one color. When everyone is ready press down on the tree in order to start the game. 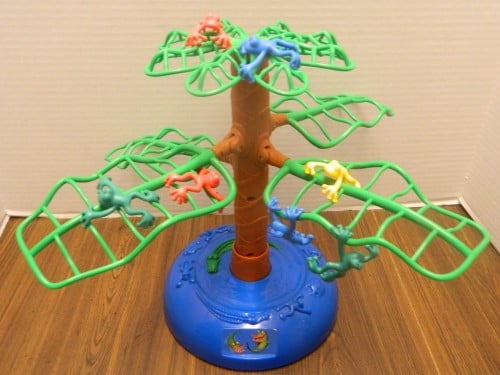 In this situation blue, red, and green have two frogs on the tree while yellow has only one frog.

Each player counts their frogs that are still on the tree. Whichever player has the most frogs in the tree, wins the round. If there is a tie, no one wins the round. A new round is started and everyone once again tries to get as many frogs as possible on the tree. When a player wins their third round, they win the game.

There have been quite a few children’s games that have relied on flipping objects into the air in order to score points. The genre seems to have started with games like Tiddly Winks which used a chip to flip another chip into the air. Other games like Jumpin’ Monkeys and Yahoo Buckaroo! were also created. As a young kid Jumpin’ Monkeys was probably one of my favorite games. I have played several other games from the genre over the years and the biggest problem is that all of these type of games are so similar. Unfortunately so is Flippin’ Frogs.

Flippin’ Frogs is designed as a children’s game and it works well as one. The rules are really simple. You pretty much just launch frogs at the tree and hope that they stick. You probably only need a minute to explain the game to a new player. The game has a recommended age of 5+ but I could see younger kids being able to play the game.

While the game has no strategy, some skill is required to be good at the game. In order to be good at the game you need to know how much pressure to apply to the launcher to have the frogs land on the tree. This is mostly a trial and error process which most people should get pretty good at after a couple games.

Even though you can get better at the game by figuring out how much pressure to put on the launchers, luck will have a big impact on who ends up winning. You can perfectly launch the frogs but if you have a bad bounce they can easily bounce off the tree. Flippin’ Frogs also has a mechanic where the branches flip up into the air at the end of a round. At first I thought this was an interesting addition to the game. The branches do too good of a job knocking frogs off the branches though. The flipping branches usually take off over half of the frogs. The only real safe location for frogs is the top piece of the tree. If your frogs land on one of the branches you pretty much need to hope that they stay on.

Each round of Flippin’ Frogs is really short. Each round seems to take two minutes at max. For most games it will probably take around 15 minutes for one player to win three rounds. I think each round should have been a little longer. Unless you are really good/lucky, you are most likely not going to get all of your frogs on the tree during a round. You usually will only get three frogs on the tree.

The good thing about the short length is that Flippin’ Frogs is one of those games that you won’t want to play for long stretches of time. It is the type of game where you will play one game every once and a while. You will then tire of the game and put it back into storage.

The biggest problem with Flippin’ Frogs is that it is hard to retrieve all of the frogs that miss the tree. You usually have to spend as much time picking up the frogs as you do flipping the frogs in the first place. The frogs fly all over the place and sometimes it is hard to pick them up during the game especially if they fly to the other side of the table or fall on the floor. Every game of this genre seems to have this problem. If someone were able to fix it, these games would be much better since you could focus on flipping objects instead of picking them up.

For the most part I liked the components for Flippin’ Frogs. The frogs are made of a rubbery like substance which I liked since they seem to move through the air better than the objects in most of these type of games. The launchers also seem to work considerably better in this game than other games. In most of the other games you have to be lucky to get the object to fly far enough to even reach the target. In Flippin’ Frogs you sometimes have to worry about flipping the frogs too far.

The one thing I don’t like about the components is the music that plays during the game. I found it annoying after only a couple of rounds. The game should have come with an option to turn off the sound since I think it will annoy most people.

Get A Grip: The No Thumbs Challenge Game Board Game Review and Rules