Catchword is a word game that also includes elements of both card and dice games that was published in 1982 by the creators of Uno, International Games. The object of the game is to spell out words using the cards you are dealt as well as the letter dice that are rolled.

To start Catchword, each player picks out a color and is given the chip that corresponds with that color. Players decide how many points they want to play up to (probably somewhere between 25 for a short game to 100 for a relatively long game). Then, someone shuffles the deck and deals five letter cards (which will all be consonants) to each player. Players place their cards face up on the table in a row. The rest of the cards are placed in the middle of the table to form a draw pile. The first player rolls the dice (one side of each dice corresponds to each of the five vowels and the other is a Y) and the round begins. All players attempt to form a word using their letter cards (at least one), the vowel that was rolled on their colored dice, and (optionally) any number of other vowel dice (including their opponents’ colored dice) that they wish to use. 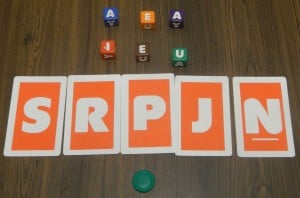 This player will have to use the U rolled on the green dice and at least one of these five letter cards to make a word.

The first player to come up with a word and call it out (only the first player’s word is accepted), forms their word using the cards and dice. If the other players agree that it is an actual word (and they have used their assigned vowel dice in the word), they take the cards they used to make the word and add them to their point pile (each card will count as a point when the game ends). They also replace the cards used with new cards from the draw pile to get back up to five cards. If the player spells the word incorrectly, the word isn’t actually a word, or they fail to use their vowel dice, they don’t get to bank their cards and all other players that can form a word get to do so. 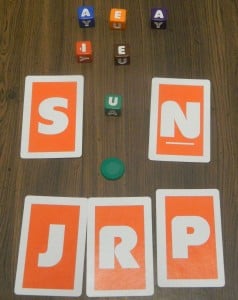 “Sun” is one of the shortest possible legal words the green player could come up with (the only shorter ones are “up” and “us”). 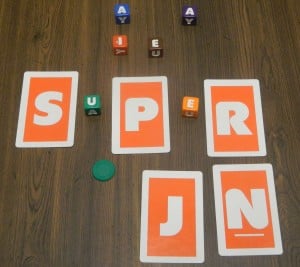 While a player only has to use the vowel on their colored dice, they can use others as well. In this situation, the green player made a longer word (“super”) by using the orange player’s dice as well.

The winner of the turn re-rolls all of the vowel dice and a new turn begins. In all turns, the first player to call out their word banks the cards they used and replaces them with cards from the draw pile. If there is a turn where no player can spell a word (this only happened once in our game when we all had only a few cards left), the vowel dice are rolled again.

Play continues until all of the cards in the draw pile are exhausted and one player has played all of the cards in their hand (this ends the round). When each round is completed, players count up their banked cards and receive one point per card. Also, every time a player uses all five of their cards at the same time to form a word, they are given the option to either add five bonus points to their total or take away five points from each player.

If the agreed upon point total to win has been reached, the player who reached it is the winner. If not, a new round begins, which is played in the exact same way. The points players score in the new round are added to the ones they scored in the previous round(s). New rounds continue to be played until a player reaches the agreed upon point total, in which case they win the game.

I don’t do this too often but I’m going to suggest an additional rule for Catchword and modify two rules I don’t like. First of all, the game doesn’t state a minimum word length (other than that you have to use at least one of your letter cards and the vowel on your colored dice). To make the game better, I would suggest adding a minimum length of at least a four-letter word (maybe even five). It is way too easy to create two and three letter words and the game is not at all fun when this is an option. How fun can a game be when in most rounds you get five or less seconds to make a word? When a couple of players are down to three or less letter cards (near the end of the round), you might have to drop the requirement though.

The first rule modification I would make is to drop the option that players get when they receive a bonus by playing all five of their cards in a word. The five bonus points is fine (possibly even a bit too low since it is very hard to do it) but penalizing every player five points is just stupid. They did nothing wrong and unless you are playing in a two player game or are very close to winning, it almost always makes sense to take the penalty option (since instead of just scoring five points, you are taking away five to twenty-five points total points from your opponents). All this does is penalize players for no reason and add more time to the game.

The other modification I would make to Catchword is to not allow players to lay their cards out anyway they’d like. The biggest problem this game has is that players can find words within seconds of the dice being rolled. If you can’t lay the cards out in often used combinations (for example C and H next to each other for all the words that use -ch), this might make rounds last a little bit longer.

Catchword definitely has some problems (some of which have been laid out in the how to play section of this review). They aren’t big enough to make the game completely unplayable but they do make it wind up as a below average game (I gave it a two out of five). On the positive side, Catchword puts an interesting twist on word games (which tend to wind up being pretty similar) by combining card and dice games together. However, the problematic rules and nearly instantaneous word solving (someone will have a word in less than five seconds almost every turn) overshadow it and make the game hard to recommend.

The biggest problem is definitely the fact that most turns end up lasting one to five seconds. Since players are allowed to see their letter cards at all times (and even place them in the order they’d like), they can always be thinking of potential words and just have to remember them. When the vowels they need come up on the dice, they quickly shout out one of the words they pre-made. This really hurts the game’s fun factor and makes it almost impossible to make any words longer than four or five letters (since coming up with longer words requires more time which players won’t have).

While the modification I mentioned earlier can help a bit, it is still far too easy to come up with a word quickly. There are two more extreme modifications that could actually make the game fun. First, you could give each player one minute to try and form the best word they can using their letter cards and vowel dice. This would make the game much more skill-based and get rid of the instantaneous word call-outs completely. The other option is discarding all unused cards back to the draw pile and dealing out new cards (face down this time) each turn. Players keep all their cards face down until the dice have been rolled. They then quickly turn all their cards over and try to make a word. In this version, players won’t know what cards they have so they can’t form possible words before the dice are even rolled.

However, this isn’t the only problem with Catchword. The letter cards vary significantly in difficulty. If you get a lot of letter cards that don’t work well together (for example you have all uncommonly used letters like J, V, and K), you might be stuck with them for a pretty long time. The dice rolls are also very important because at the very least, you need to use your vowel dice to form your word. There are a lot of situations where you could be stuck waiting for your vowel dice to land on a specific letter because you can only think of one or two words that work with your letter cards.

The last thing I don’t like about Catchword is the boring design and components. The cards are really boring looking and the other components aren’t much better. This game was made back in 1982 when game design wasn’t really much of a big deal, but this game’s design is even boring compared to the games from its time.

However, even with the massive list of things I didn’t like about Catchword, I still don’t think the game in absolutely horrible or unplayable. I like how the game combines word games with card and even dice games. Rounds are very quick (much quicker than most other word games) and the game is very flexible in terms of time. If you don’t have a lot of time to play, you can set a low point total requirement that should only take two or three rounds to reach. On the other hand, if you get addicted to Catchword and have a lot of time on your hand, you could play up to 500, 1000, or even more points.

This is also a game that kids should be able to play relatively easily. Since most of the words formed are going to be short words, Catchword is a word game they might actually have a chance in. Word games like this also can help children build their vocabulary and practice their spelling skills.

If the rules were a bit better, Catchword could have been a solid word game. Mixing word, card, and dice games all together could have been a lot of fun. Unfortunately, the game made a lot of bad gameplay decisions with the end result being turns that often last just one to five seconds. The game is playable, just not particularly fun because of the poor rules. However, if you find the game for cheap and are willing to experiment with the rules, Catchword could be a decent purchase.