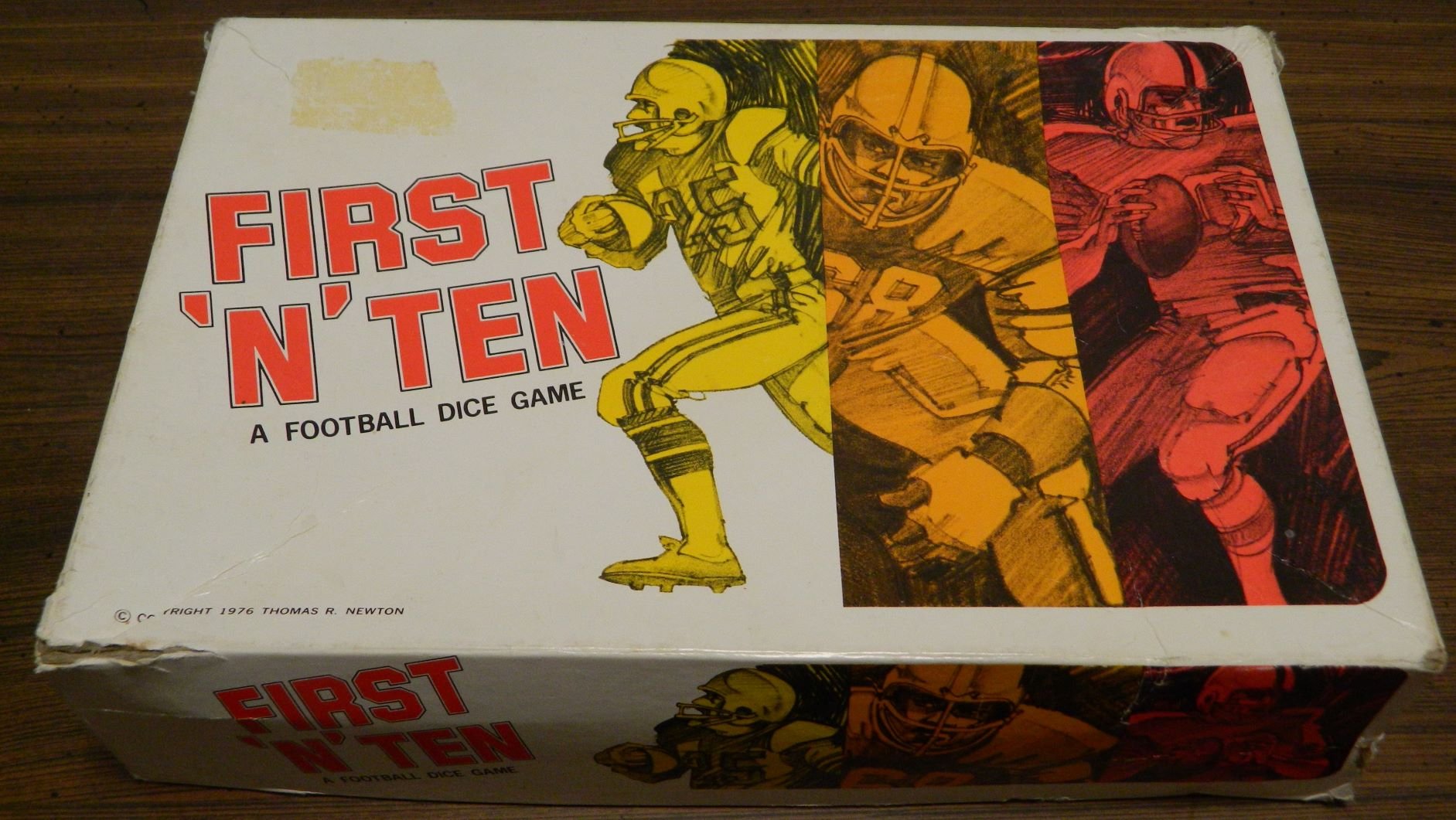 Like many Americans I am a huge fan of football. As I also am a big fan of board games I have been on the lookout for good football board games for quite a while. The problem is that very few are anything more than generic dice rolling games mixed with charts. Outside of Battleball and Jukem Football most of the football games that I have played are average or even worse. There have been a lot of different football games made, but very few do a good job of adapting the sport to board games. Today I am looking at another football dice game called First ‘N’ Ten which was released back in 1976. I have to say that I didn’t have high expectations for the game because it looked like the most generic football dice game that you could imagine. I still gave the game a chance because I was hoping that it would exceed my expectations. Unfortunately it didn’t as First ‘N’ Ten A Football Dice game might be the most boring and anti-climatic game of football that I have ever played where a more suitable name would have been snoozeball.

How to Play First ‘N’ Ten A Football Dice Game

As this is a game about American Football a general understanding of the rules of football are assumed in the how to play section.

To initiate a kickoff the kicking team will roll the two dice and add them together. They will compare their result to the “Kick Off Chart”. The corresponding spot on the chart will show a number. The kicking player will move the ball from their own 40 yard line the number of yards shown on the chart.

The receiving team will then roll the dice and consult the “Kick Off Return Chart”. They will move the ball towards the other side of the field the corresponding number of yards found on the chart.

The offense will then start selecting plays and rolling the dice to determine the result of those plays. Like normal football, players have four downs to get a first down. When a player selects a play they need to take note of whether they are using a “Single-Wing” or “T-Formation”. T-Formation plays will have players roll both dice and add them together to get the number they should look up.

If a player makes it within the other player’s 35 yard line they have the option to kick a field goal. They will roll both dice and consult the chart. If the kick is good they will score three points and they will kickoff to the other player. If they miss the other team takes over where the other player missed or the 20 yard line (whichever is further from the end zone).

In situations where a player rolls a number that corresponds to a section that says fumble or interception the ball will first be moved the number of yards shown on the space.

For fumbles the dice are then rolled to determine if the fumble is recovered by the offense. If it is recovered the defensive team will take over at the current spot of the ball.

For interceptions the dice are rolled and compared to the chart to determine how many yards the interception was returned.

If a penalty occurs the letter next to the penalty determines who it was called on. For example “Penalty-D” means a penalty on the defense.

The dice are then rolled and the penalty yardage is equal to the result from the chart.

At the end of a quarter the clock is reset and play continues as normal. At the beginning of the second half the ball will be kicked to the team that kicked off to start the game.

The game ends when all four quarters have been played. The player that scores the most points will win the game.

My Thoughts on First ‘N’ Ten A Football Dice Game

If you have read some of our other football board game reviews here on Geeky Hobbies you will know that we haven’t had the greatest luck when it comes to games that utilize this theme in the past. There are a few standout games, but most become pretty boring slogs where you just roll dice and compare the result to a chart. Unfortunately that is exactly what First ‘N’ Ten A Football Dice Game is. The game is not broken, but it is really dull.

The problems begin with the fact that the defensive player gets to do absolutely nothing in the game. The defensive player has to just sit there while the offensive player keeps rolling the dice and calling plays. In most of these types of football games the defensive player gets to do something. They get to call plays or at least roll dice. Neither happen in First ‘N’ Ten A Football Dice Game. This leads to the game being really boring when you are on defense. As the defense can’t do anything it kind of breaks the whole allusion of the game recreating football as the offensive team can just keep calling the same play over and over again and it will be successful every time if you roll the right number.

Speaking of the game recreating football it does in some ways and doesn’t in others. The game does have you choose from actual football plays. Outside of not having players play defense the game does a decent job recreating football. The catch is that it basically recreates football like it was back in the 1970s. Many of the plays in the game aren’t even used in the NFL anymore and are only used at some colleges and high schools. The game also seems to have a much greater emphasis on running the ball as it is much harder to throw the ball than it is today. The game might do a decent job recreating a game of football from the 1970s, but it doesn’t do a great job recreating a game of football from today. This isn’t really the game’s fault as it had no idea how the sport would change over the past 40+ years. I mostly bring it up to let you know that it feels outdated in some ways.

As the game is all about rolling dice and consulting charts there is unfortunately not much strategy to First ‘N’ Ten A Football Dice Game. Like football your goal is to just keep getting first downs until you are able to score. As you have no defense to worry about this means choosing the play that has the best odds of getting you enough yards for a first down. You can occasionally take a risk to make a big play, but you are usually best off choosing the play that gives you the best chance of success. This could mean choosing the same play over and over again which can work as you don’t have to worry about the defense knowing what you are doing. For this reason I don’t know why the charts weren’t designed in a way to make it really easy to determine the odds of success. The game should have sorted the outcomes from worst to best or vice versa. This would have made it really easy to determine the odds of success as well as knowing right away whether you made a good roll. Instead the good and bad outcomes are just randomly spread out in the charts making this aspect of the game harder than it needed to be. Sorting the outcomes would have had no impact on the gameplay and would have just made it simpler to read the charts.

Ultimately First ‘N’ Ten A Football Dice Game is like every other generic dice game. Unless you make really stupid decisions your fate in the game is going to come down to how well you roll. The player that rolls best is almost guaranteed to win the game. Your decisions ultimately don’t have a big impact as long as you pick a play that matches the current situation. Because of this you don’t really feel much of a sense of accomplishment for doing well in the game.

This along with the other issues lead to a game that is just really boring. The game may have football plays and you are moving the ball down the field, but it doesn’t feel like you are actually playing football. The game just feels like your typical generic dice rolling game. I wouldn’t say that First ‘N’ Ten A Football Dice Game is broken, but it doesn’t really have anything that keeps your attention. By the end of the game that I played I had no real interest in playing the game again. I have played several other games that offer a similar gameplay experience which do a better job adapting football to a board game.

Generally in my reviews I like to talk about both the positives and negatives of a game as even the worst games have some redeeming qualities. In the case of First ‘N’ Ten A Football Dice Game there unfortunately aren’t many positives. I guess the game is quite easy to play. The game requires a basic understanding of football and basic math and chart reading skills. That is all you really need to play the game. The game doesn’t have an official age recommendation, but I would say that it would have been quite low. Therefore if you are looking for a very simple football game you will get exactly that from First ‘N’ Ten A Football Dice Game.

With how simple it is to play, the game also plays pretty quickly. In fact the game lets you choose how long you want to play as you set the time limit for each quarter. Without adding in a play clock I think using a set time limit for each quarter has a serious potential issue though. If you are ahead you can just waste a lot of time to slow down the game. Instead we choose to have a certain number of plays each quarter as this prevents players from just wasting time while also allowing the game to move quicker. Each play takes just a few seconds as you need to pick the play, roll the dice, and find the corresponding number on the chart. This means the game can be played quite quickly.

Should You Buy First ‘N’ Ten A Football Dice Game?

Despite being a big fan of football, First ‘N’ Ten A Football Dice Game is pretty much exactly what I expected it to be. You basically just roll dice and consult charts to see what happened. This leads to a pretty boring experience that doesn’t even feel like football. Instead it feels like a very generic dice game that is quite boring. For some reason the defensive player gets to do nothing in the game outside of just sitting there watching the offensive player. The only strategy in the game comes from finding a play that has the best odds of getting you enough yards for a first down. Other than this the game relies entirely on rolling the right numbers. The game is easy to play and plays pretty quickly. Neither of these are enough to overcome the game’s many problems though.