To be the first player to reach the finish space by exact count.

Each player takes a dice shaker, one die, and the corresponding colored pawn. The pawn is placed on the start space and the die is placed inside the dice shaker. To determine who goes first all players roll their die and whoever rolls highest gets to go first. 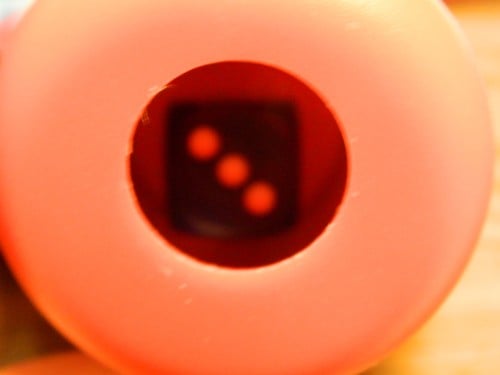 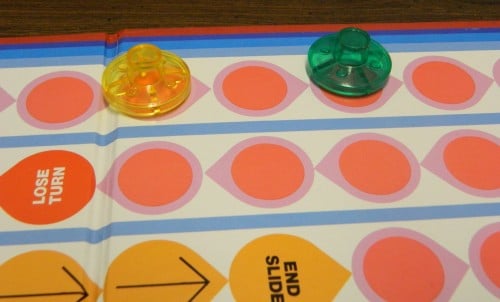 If the yellow player says they rolled a two (either fibbing or not) they would move to the space behind the green pawn instead to sharing the space.

The Fibber! game board contains several special spaces which go into affect when a player lands on them.

The first person to land on the finish space by exact count wins Fibber. The player doesn’t win until any challenges have been settled which is likely since if no one challenges the player will automatically win the game even if they were lying. 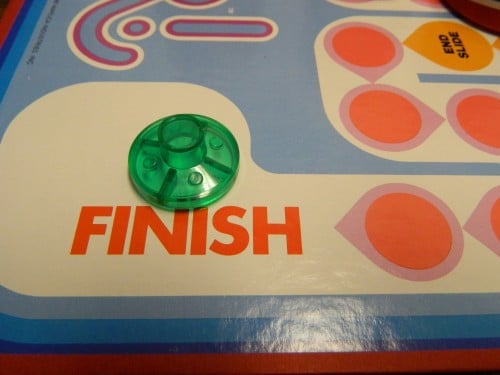 The green player has reached the finish space by exact count and has won the game.

Regular readers of Geeky Hobbies will know that I am not a big fan of roll and move games. So many roll and move games have been made and many of them suffer from the same problem of relying almost exclusively on the luck of the dice. You roll well you win. You roll poorly you lose. These games rarely have much strategy and you as a player usually don’t have much impact on the ultimate outcome of the game.

When first looking at Fibber! I didn’t give the game much of a chance. I was positive that it was going to be another generic roll and move game that just added a bluffing mechanic. I really didn’t think the bluffing mechanic would change up the gameplay enough to make Fibber anything more than another bland roll and move game. While Fibber! is not a great game, I have to admit that it was considerably better than I expected.

The bluffing mechanic actually adds a lot more strategy to the game than I thought it would. While a player could just lie every single turn, players will catch on pretty quickly. This means that you need to be judicious in when you decide to bluff. You probably want to tell the truth most of the time unless you are a really good liar. When lying you are usually going to want to lie by saying you rolled a higher number than you actually rolled. The only time this is not the case is when you want to land on a slide, double or triple space. Landing on the double and triple space in particular are really important in the game. Other than landing on one of these spaces, there is no reason to bluff a one since why would you purposely move forward less spaces than you could have. The easiest times to lie are probably when you just want to randomly add one or two to your roll to move a little quicker since you are less suspicious at these times.

Fibber also occasionally has situations where you want to get caught bluffing or call someone on bluffing and hoping that they weren’t. These situations arise when you are just a couple spaces past one of the special spaces and by being sent back you land on the space. For example in the game we played a player was a couple of spaces past the start of a slide. The player then challenged another player that was very likely telling the truth just so they would be sent back to the start of the slide which ultimately gained the player some spaces since they got to slide to the end of the slide.

One unique strategy that players that have fallen behind can implement involves working together in order to catch up. Players that have fallen behind could end up making a truce that they aren’t going to call out each other even if they think the player is bluffing. This forces the player that is far ahead to either risk losing spaces by calling the bluffs or letting the other players bluff free spaces and start catching up.

While the game does a better job with strategy than I expected, I kind of wish the game had a little more to it. Being able to position your piece by bluffing numbers is one of the most interesting parts of the game and I wish there were more situations where you could take advantage of it. A large majority of the spaces on the game board are just normal spaces. This means that you are rarely in a position where you can even try to bluff one of these situations. The game should have added a couple more different types of spaces which would have added a little more variety to the game.

While the bluffing adds more strategy to the game than I was expecting, luck still plays a large part in who ultimately wins the game. This was proven by the fact that a player almost won the game without lying once throughout the entire game. This player was extremely lucky and would regularly roll the best possible number for a situation. The player was so fortunate that it seemed like the player was always lying but they weren’t.

Other than luck, the second biggest problem with the game is that it just lasts too long. The game board is too long which makes the game kind of drag towards the end. The game ends up lasting closer to an hour when it would have been better at around thirty minutes. A more condensed game would have also eliminated some of the luck since it would have given less opportunities for a player to just roll considerably better than the rest of the players.

Overall the components are not terrible but are nothing special either. The dice shakers work pretty well since you can see your own roll pretty easily without letting the other players see. The cover also comes off easily for when other players think you are bluffing. The problem is that the dice seem to get stuck on the edges way too often which makes it hard to determine which number was rolled forcing you to re-roll the die. The pawns look like they were taken from another game, mostly likely a game like Topple. The game board is also really bland since it has pretty much nothing other than the spaces on it.

The biggest problem with the components is the instructions. You can run into quite a few situations where the game gives no clarification on how you are supposed to handle it. The instructions also include two rules that you can’t actually even use. First the instructions mention a “Start Again” space. The game board doesn’t even include a start again space. This rule looked really rigged since being sent back to the start of the game would have been unfair. The other rule involves only getting to double/triple your movement with double/triple spaces that match your color. This rule has to be ditched because there are no double/triple spaces for the green or yellow player and that would be really unfair for those two players.

I think these two rules can be explained by the fact that they were probably originally in the game but after testing were removed but were never taken out of the rules themselves. I am guessing the start again rule was removed because it is  unfair. The double/triple rules were probably eliminated because it would have been hard to utilize the mechanic with each player only having one chance to double their roll and one chance to triple it. Even if this rule could be enforced I don’t think I would because these spaces are some of the more interesting spaces in the entire game and you would barely be able to use them if you followed the original rules.