The abstract strategy game is a genre that a lot of people either love or hate. An abstract strategy game is defined by a game that focuses solely on the gameplay with little regard to the game’s theme. Some abstract games don’t even bother coming up with a theme. A lot of abstract games involve players having to plan multiple turns in advance. In general I like abstract games since they can come up with some really interesting gameplay mechanics. Today I am looking at Faces in the Crowd which is an abstract game that appears to have been designed for more of a younger audience than the typical abstract game. While Faces in the Crowd has some interesting ideas they just don’t work which leads to a broken game.

How to Play Faces in the Crowd

Place the gameboard in the center of the table. Each player takes a number of face tokens based on the number of players: 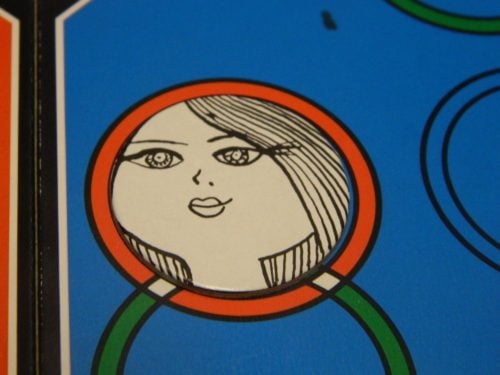 This player has placed a face on a red ring. The next player will have to play their next disc in the red section of the board.

When playing a face, you cannot place it where it overlaps a face already on the gameboard. 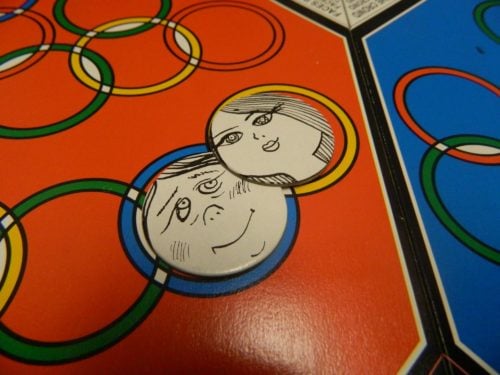 Here is an illustration of a move that is not allowed in Faces in the Crowd. The disc on the yellow ring couldn’t be played since it overlaps the disc played on the blue ring. 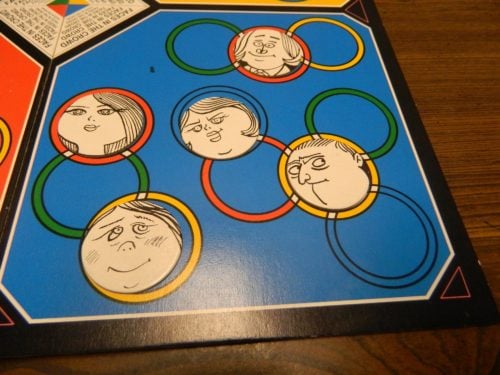 The first player to get rid of all of their face tokens first wins the game.

My Thoughts on Faces in the Crowd

Faces in the Crowd is a strange little board game. It has some interesting gameplay mechanics that could have made for a good game. I can see potential for the some interesting strategic decisions. Unfortunately nothing about the game seems to work as intended.

When I look at the game’s mechanics I actually see potential for Faces in the Crowd. The choice of where to place your disc impacts the game. When placing a disc you can place it in an area that blocks off a lot of rings and thus forces a player into picking up discs quicker. You could also place it where is covers up fewer rings making the game longer. This decision could have been interesting if it actually seemed to make a difference in the game.

The other strategic possibility is in choosing where the next player has to play a disc. This creates some interesting decisions since after some disks have been played you can actually see how a move will impact the next couple of moves. For example you could force a player into playing in a section that has only one option. That play might then force the next player into a move and so on. Eventually in every game one player will be presented with a play that will set up an auto-win for them. When a player has one disc remaining there is the possibility that they will be able to make a move that will force the player in front of them to draw discs which lets that player play anywhere they want and they will automatically win the game.

These two strategic possibilities could have made for a good game since they appear to give players a lot of control over their fate in the game. After playing the game though it actually feels like the opposite. Unless you are able to plan several moves in advance while also predicting what the other players are going to do, you really don’t have much control over your fate in the game. For your first two or three moves you are basically just making a guess at the best move since you have no idea how the rest of the game is going to turn out. Towards the end of the game the board is filled in enough that you could actually strategize but at that point your fate is basically set since most of the future moves are already set in stone.

This means that there is basically no long term strategy in Faces in the Crowd. You have some control over what the next player does but by the time it is your turn again, the game layout is going to be much different. Since the player before you controls where you can play, you usually don’t even have a lot of say in where you can play on a turn. For most of the game it feels like you just make a move and hope for the best.

Being an abstract game I didn’t have particularly high expectations for the components in Faces in the Crowd and I was not disappointed. I would say that Faces in the Crowd’s components are pretty bad in general. All of the components are made of quite thin cardboard. The artwork is far from special even though that is to be expected from an abstract game. Speaking of being abstract, the game’s theme is totally pasted on and has absolutely nothing to do with gameplay.

Should You Buy Faces in the Crowd?

Faces in the Crowd is a game that I feel wasted an opportunity. I actually think the game had a couple interesting ideas that could have made for an interesting abstract strategy game. The whole package just doesn’t work though. Early in the game you are pretty much just making a random move. A couple moves later when you can actually see how the game is shaping up, your fate is basically sealed. It looked like Faces in the Crowd could have some strategy but when you sit down and play it there really isn’t much to the game. While you might be able to fix the game with a lot of house rules, I just don’t think it is worth the effort.

If you would like to purchase Faces in the Crowd you can find it online: Amazon