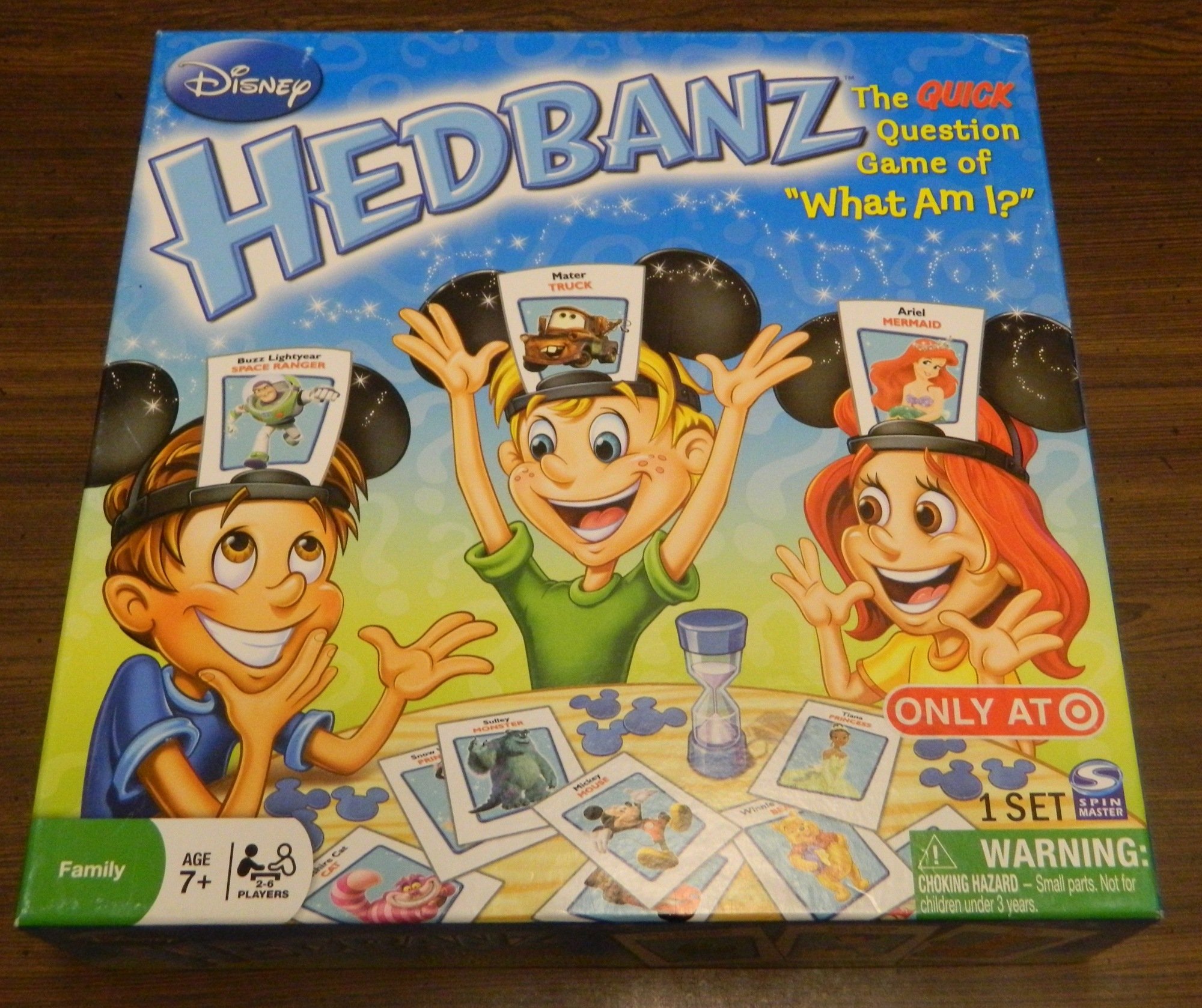 How to Play Disney Hedbanz

A player begins their turn by flipping over the timer. The player begins asking yes or no questions trying to figure out the identity of the card on their headband. The other players will answer the questions with either “yes”, “no”, “could be”, and “I don’t know”. The player can keep asking questions until the timer runs out.

If a player doesn’t think they will be able to figure out their card, they can get rid of the card and draw a new card. The player has to take a Mickey chip from the center of the table though.

The first player to get rid of all of their Mickey chips first wins the game.

My Thoughts on Disney Hedbanz

While Disney Hedbanz is never going to be confused for a highly strategic game, there is more strategy to the game than you would expect. While you could just haphazardly come up with questions to ask, a good set of questions to narrow down the possible options is really helpful in the game. I really like the “20 Questions” mechanic where you use your questions to help narrow down your identity. For example figuring out if you are a human, animal or object really helps in the game. Another good question to ask is whether your card is from a Disney or Pixar movie due to the distribution of cards in the game (more on this later). While there is luck in getting a character that you actually know, players that ask good questions can gain a distinct advantage in the game.

Just like with the normal Hedbanz game, there are moments that can be quite funny in Disney Hedbanz. What makes the Hedbanz games funny is the fact that without knowing what card is on their head, players can ask some funny questions based on the character card on their head. One moment in particular that was really funny was when a player put the Dopey card on their headband and everyone starting laughing. This was because the card was quite fitting for the player. The player wondered what was so funny and when they figured out their card they started laughing as well.

Being a fan of Disney and having seen all of the theatrically released Walt Disney Animation Studio films I was interested in seeing how well I would do in the game. While I wouldn’t call the game particularly difficult, I would say that Disney Hedbanz is a game that heavily favors people that have seen all of the most popular Disney films. The cards significantly favor more recent films with the only cards from older Disney films being the highly recognizable main characters. Having seen all of the theatrical Disney movies I actually didn’t even know all of the characters since I had no idea who Silvermist was (from the Tinkerbell movies). Otherwise I recognized all of the other characters but I probably wouldn’t be able to name all of them.

Disney Hedbanz is a game that I think children might actually have an advantage over their parents in. While adults will be better at asking good questions in order to narrow down their identity, children are more likely to be familiar with a lot of the characters featured in the game. Unless you are a diehard Disney fan I think you will have trouble remembering the names of some of the characters included in the game. In order to be more accessible to younger children each card includes two identifiers with one being the characters name while the other is a generic word that can be associated with the character. While this was meant for younger children, I can see quite a few adults benefiting from using the easier identifier for quite a few of the cards.

Being Disney Hedbanz I was actually quite surprised by how many of the cards are for Pixar characters. Pixar is obviously owned by Disney but almost half of the cards are dedicated to just a couple Pixar movies. With eight cards (over 10% of the total cards) dedicated to Toy Story it felt like almost every character that speaks in the Toy Story franchise has a card in the game. I am guessing this was done since the Pixar character are probably more familiar to children but I wish a larger percentage of the cards were from Disney’s lineup or at least the Pixar cards could have been spread among more of their films.

I have to give Spin Master credit for Disney Hedbanz’s components. You just get the cards, headbands, and chips but the little extra effort put into them is nice. While they might make you look ridiculous, I really like the addition of the Mickey ears for the headbands. The chips being shaped like Mickey heads are also nice. While I wish the game would have had some more cards, 78 cards is a decent amount of cards that should last for a decent amount of games. The likelihood of you remembering all of the cards is unlikely as well so you can replay the cards and still have fun. I do wish there were more cards though since using the same cards over and over again will get repetitive at some point.

Should You Buy Disney Hedbanz?

Hedbanz for Adults surprised me in the past and Disney Hedbanz surprised me as well. It is far from a perfect game but you can have a surprising amount of fun if you don’t take the game too seriously. There is a strategy to coming up with good questions to narrow down what card is on your head. Unlike the more traditional Hedbanz games though, Disney Hedbanz does require quite a bit of knowledge of Disney films. You don’t have to be an expert on Disney films but you do need to know a lot of the characters from the most popular Disney films or you are not going to do well in the game.

If you aren’t a big fan of Disney it shouldn’t come as a surprise that Disney Hedbanz is not going to be for you. If you like serious games, it also won’t be for you. If you want a quick fun game that you don’t have to take seriously though you can have a surprising amount of fun with Disney Hedbanz. If you can get a good deal on the game I would recommend picking it up.

If you would like to purchase Disney Hedbanz, you can find it online: Amazon

One thought on “Disney Hedbanz Board Game Review and Rules”