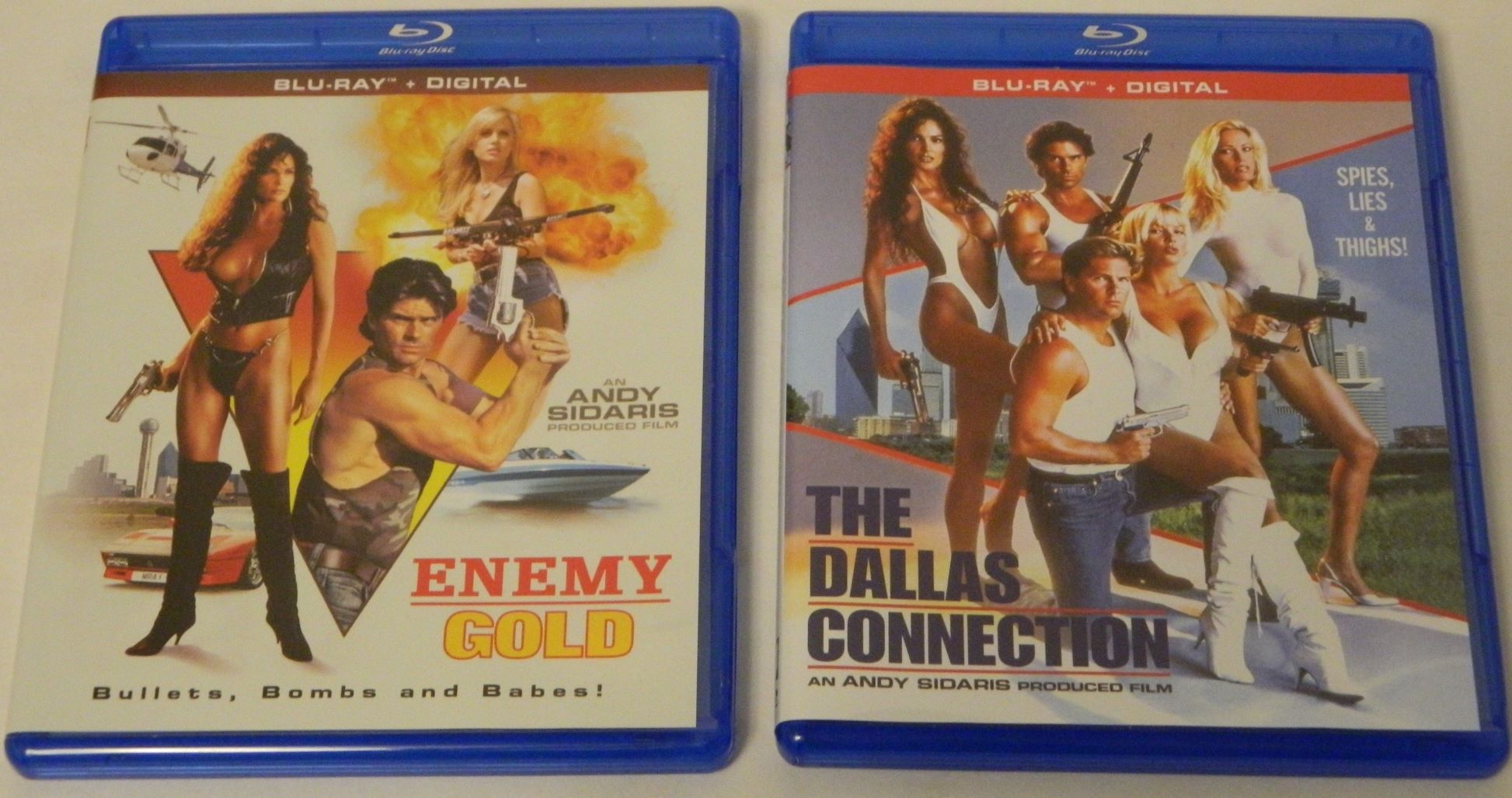 While I am certainly a big fan of the early entries in the Andy Sidaris Triple B series, my enthusiasm for the last few films has been waning. The last two (Hard Hunted and Fit to Kill) were pretty much boring rehashes of the first six films and focused way too much on the T&A instead of the action and cheesiness I prefer from these movies. With Andy Sidaris moving to a producer role for these ninth and tenth films and his son Christian Drew Sidaris taking over the director’s chair, I was hoping for something new or at least a return to B-movie form. I eventually got my wish but not with Enemy Gold (which unfortunately might be even more boring than the last two films). Instead, The Dallas Connection was the movie that finally showed some signs of life for the franchise after three consecutive mostly dull films. It doesn’t hit the highs of the early entries in the series but it is likely the best one since at least Do or Die and deserves a place in the upper half of this franchise’s tier list.


A director swap isn’t the only change made in these movies. Gone are Dona Speir (Donna), Roberta Vasquez (Nicole), Cynthia Brimhall (Edy), Michael Shane (Shane Abilene), and most of the other Sidaris regulars. There are some returning actors, most notably Bruce Penhall in a new starring role as agent Chris Cannon (who’s pretty much the same as his old character Bruce Christian). Julie Strain from Fit to Kill also returns for both films and frequent villain Rodrigo Obregon makes his customary appearances as well. And of course there’s the usual T&A, shower, and undressing scenes that this series is well known for. Otherwise, most everything else is new though it still feels very familiar. This includes a change of setting from Hawaii to Dallas, no more “agency” that everyone works for (though its replaced by another similar one), and at least in The Dallas Connection, a renewed emphasis on the cheese factor that’s been sorely missed in recent films.

Note: Like all of my reviews for this movie series, these two films are being reviewed as B-movies rather than “serious” films. As such, if you aren’t into riffing, cheesiness, or unintentional hilarity you should almost certainly skip both of them despite the rating I am giving them. If they were being reviewed critically on only their stories and artistic merit, they would come nowhere near the grades I am giving them. They are much better and more fun to watch if you watch them as B-movies and that’s how I’m reviewing them.

Unfortunately the first of these two films did absolutely nothing to stop the downward trend this series had been on over the last few movies. In Enemy Gold, secret agents Chris Cannon (Bruce Penhall), Mark (Mark Barriere), and Becky Midnite (Suzi Simpson) raid and confiscate a drug kingpin’s stash which also causes them to be suspended from their jobs. While enjoying their time off by dirt-biking in the wilderness, they stumble upon a clue leading to a long-lost Civil War treasure buried in the woods (which Chris and Mark had been searching for since they were kids). They also have the kingpin (Rodrigo Obregon) and assassin Jewel Panther (Julie Strain) on their tails.

The biggest problem with Enemy Gold is that it feels like next to nothing happens. It’s just a random series of conversations and events with a plot that goes almost nowhere. I doubt anyone watching the film cares about this pointless treasure, they just want to see some action and cheesiness, neither of which we get very much of. There’s the usual gratuitous clothes-changing, shower, and hot tub (surprisingly clothed for once) scenes and enough T&A for those into that sort of thing but I’d actually say things are toned down quite a bit compared to the last few movies. On the positive side, there’s at least some gorgeous fresh faces in this movie for those who care about the T&A portion of these films. As I’ve written many times in my other Andy Sidaris film reviews, I mostly care about the action and cheese, not the nudity so I was definitely disappointed by the lack of either one of those things. To be honest, I would even struggle to consider this an action film outside of a few dirt bike chases and the usual explosive conclusion. With Enemy Gold being the third consecutive mediocre Sidaris film (possibly even the worst one of the first nine), I was beginning to think I was just starting to get bored with the movies in this series. 2.5/5

Thankfully, The Dallas Connection (also directed by Andy’s son Christian) would turn out to be the best Sidaris film since at least Do or Die (I actually think it might even be better than that and all the movies in the series since Picasso Trigger). The plot shows a bit more thought than most Malibu Bay Films starting off with three scientists being assassinated by Black Widow (Julie Strain) and her sexy cohorts Cobra (Julie K. Smith) and Scorpion (Wendy Hamilton). These three scientists and a fourth (played by Rodrigo Obregon) were working on a spy satellite of sorts. The equation for it was somehow separated into four parts with each scientists having 1/4 of it and since only one of the scientists is still alive, protecting him from the assassins is of utmost importance for the agency. Ultimately, the story is a slight upgrade over the usual Malibu Bay Films fare but let’s face it, nobody cares about the plot of these films.

What most people do care about is the three staples of Sidaris films: action, beautiful women, and cheesiness. Unlike the last three films which mostly just focused on the T&A department, The Dallas Connection works a lot better because it has a much more healthy mix of all three tenets. The action and cheesy filmmaking in particular has been sorely missing in the last few films. Hard Hunted and Fit to Kill went far too heavy into the nudity and sex department while Enemy Gold just didn’t have much to offer at all. The Dallas Connection has some absolutely gorgeous women (including one of the most beautiful of the series), enough action to keep people interested, and a solid helping of cheese to keep you laughing. There’s more fun moments in the first thirty minutes (via the pretty creative and definitely cheesy assassinations) than the last few films had in the entirety of their runtime. The Dallas Connection isn’t perfect but it will definitely be in the top half of my rankings when I make my list upon the arrival of the last two films in July.

As someone who watches these films completely for the action and cheese, I was definitely satisfied. There’s enough to laugh at here for most B-movie fans. For those who don’t care so much about the action or unintentional comedy and just want to see some gorgeous women, The Dallas Connection might actually be one of the best entries in the series. I would say it has some of the steamiest scenes of any Sidaris (Andy or Christian) film between several dancing scenes (including topless ones), Black Widow giving her victims a “show” before doing them in, and a strangely sexy golf outing. It even includes a bit of beefcake for those who prefer men (though as usual there is no male nudity whatsoever). Overall, The Dallas Connection has enough of all three components that make Malibu Bay Films fun to watch and I would say its definitely worth a watch if you like this series. 3.5/5

For both of these two films, one of the best things about them is how gorgeous they look on Blu-ray. As Mill Creek has done with their other Andy Sidaris film releases, they’ve given both the restoration treatment and for films from the early to mid-’90s, they both look very good. Both are set mainly in the not-so-exotic locale of Dallas, Texas instead of the beautiful Hawaii setting most early Sidaris films were shot in but they still look great even if the scenery is much less impressive. Those movies were starting to get a bit repetitive scenery-wise anyway (I’m pretty sure the same beach appears in at least three films) so a fresh change of locale wasn’t the worst idea, I just don’t know if I would have picked Dallas. However, the “scenery” of a different sort is very impressive and looks great in hi-def. The Dallas Connection in particular has some very hot scenes that look amazing on Blu-ray. While there are a few minor issues (occasional lines going down the screen in a few scenes of Enemy Gold and some less than stellar stock footage in The Dallas Connection), both films are mostly sharp, colorful, and some of the best looking ’90s films I’ve seen on Blu-ray. Mill Creek is now 10 for 10 on these Andy Sidaris releases and both of these titles are definitely worth the upgrade video quality-wise.

In terms of bonus features, the usual array of supplements that have been included in all of these Mill Creek Entertainment releases are on these two titles as well. That means both have a short introduction, an audio commentary, trailers, and most importantly a lengthy behind the scenes featurette (the one for Enemy Gold is 44 minutes long while The Dallas Connection comes in at 38 minutes). Both titles also come with digital codes for Mill Creek’s movieSPREE service.

Ultimately, I would say that Enemy Gold is likely the worst film of the first ten in the Triple B series. It’s not a good movie and there’s only a few small things to riff on. If I wasn’t dead set on watching every film in this series, I think I would have felt like I wasted my time with Enemy Gold and I don’t really ever see myself revisiting it. However, if you already know you like the film and are just wondering if you should upgrade to a Blu-ray copy, you absolutely should as it looks great. Otherwise, most other viewers can probably skip Enemy Gold. On the other hand, The Dallas Connection is a pretty good return to form for the Sidaris family featuring a good mix of gorgeous women, action, and cheese. It doesn’t quite reach the highs of Hard Ticket to Hawaii or Picasso Trigger but I’d likely place it either third or fourth in the Malibu Bay Films pantheon. It’s definitely worth a watch for Sidaris and B-movie fans.

Enemy Gold and The Dallas Connection were released on Blu-ray on May 12, 2020.

Buy Them on Amazon: Enemy Gold, The Dallas Connection