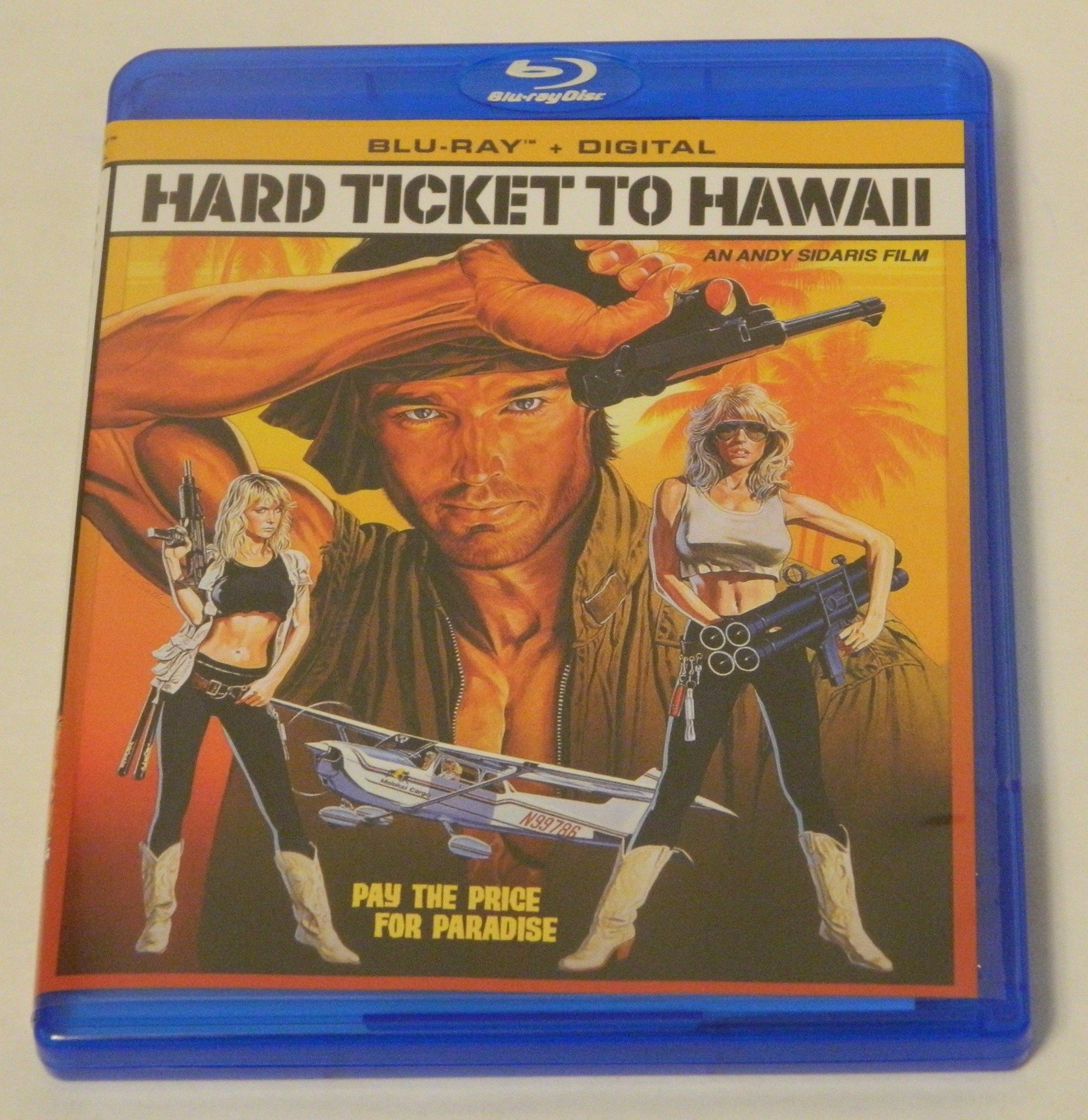 Last week, I reviewed my very first Andy Sidaris film via Mill Creek Entertainment’s Blu-ray release of Malibu Express. Mill Creek didn’t just stop at one hilarious Andy Sidaris film release on Blu-ray, they also brought Hard Ticket to Hawaii to the format last week as well. I enjoyed Malibu Express quite a bit but Hard Ticket to Hawaii is an even better B-movie. The plot makes slightly more sense, Sidaris had learned by now that viewers can go more than five minutes without seeing a set of boobs and not get bored, and this film also has one of the most hilarious scenes ever filmed. This scene would easily make the Mount Rushmore of inexplicable B-movie scenes and had me laughing harder than I’ve laughed in years. I wrote in my Malibu Express review that it didn’t quite attain B-movie classic status, I think Hard Ticket to Hawaii might just be worthy of that title.

Note: This review and the rating Hard Ticket to Hawaii received are based on it being a B-movie and not what it would deserve if it was being reviewed as a “serious” film. If you aren’t into B-movies, you can safely skip this film as it is a below average movie that is only worth watching because it’s so bad it’s good. If Hard Ticket to Hawaii was being reviewed for its quality (not its unintentional hilarity), it would have received a 1.5 or 2/5. As a B-movie though, it is a great film for those interested in the genre.

Like all Andy Sidaris movies, the plot isn’t exactly the main focus of this film. It does make a bit more sense than the nonsensical Malibu Express but it is still about the fourth most important thing to Sidaris in this film (behind action, boobs/nudity, and hilariously stupid scenes). After an admittedly creative title sequence, our two main heroes (drug enforcement agent Donna and Taryn, a woman in the witness protection program but not afraid to let everybody know that fact) become the targets of a drug lord when they unknowingly find a shipment of diamonds meant for him. With some help from a relative of the main character from Malibu Express (yes, these films have a sort of connected universe to them apparently), the two fight to stay alive and take down the drug lord and his cronies. Also in the picture, a dangerous contaminated snake that is released into the wild via a series of mistakes.

For those of you who enjoy B-movie antics, you will not be disappointed by Hard Ticket to Hawaii. The movie is absolutely hilarious and very easy to make fun of. It’s a slightly better made movie than Malibu Express, but somehow is even more hilarious to riff on. I won’t spoil the scene that had me in stitches but it involves a skateboarder, the world’s shortest car chase scene, a bazooka, and a blow-up doll. If you’ve watched the Best of the Worst episode that features this film, you know exactly what I’m talking about. For everyone else, just watch it as it is one of the most glorious B-movie scenes ever made. That’s not the only funny scene in Hard Ticket to Hawaii. I also enjoyed basically every bazooka scene (somehow it can destroy an entire helicopter but when needed, can also just gently knock a person out of a window or hit something five feet away from it without blowing everything else up), the various snake scenes, “noise grenades,” and so many other hilarious scenes. Malibu Express was good for some laughs, Hard Ticket to Hawaii almost had me in tears from laughing so hard.

I don’t watch B-movies for nudity, in fact I usually prefer more family-friendly (and usually older) B-movies. For those more interested in this aspect than I am, Hard Ticket to Hawaii is much more restrained than Malibu Express in this area. However, it still has some quality female nudity (as usual for Andy Sidaris, mostly from former Playboy playmates) and other than one long scene, it doesn’t really distract from the plot like a certain other movie. There’s still some random nudity that wasn’t really necessary for plot reasons but this film can go far more than five minutes without showing some boobs. I think there may even have been several fifteen minute spans without any nudity.

The story is pretty basic but outside of the random inclusion of the contaminated snake (for next to no reason), it actually makes some sense in Hard Ticket to Hawaii except for one thing. That is the bizarre connection this film shares with Malibu Express. A movie poster for that film appears in Hard Ticket to Hawaii. However, the main character of that film also exists because one of the characters in this film is related to them (and just as bad of a shot as he was). So, somehow those events actually happened but it was also a movie? It’s explained that the main character of Malibu Express went into acting but that movie somehow happened in real-life and was simultaneously also a film in this universe. Weird. Hard Ticket to Hawaii also ends in exactly the same way as Malibu Express. Thankfully, none of this is even remotely important to the plot and the story is still far less confusing than Malibu Express.

This release is Hard Ticket to Hawaii‘s debut on Blu-ray. In my Malibu Express review, I was somewhat happy with the video quality but also a bit disappointed in other areas. My thoughts on this film’s video quality is much less cloudy. Hard Ticket to Hawaii actually looks really good, especially for an older and lower budget film. Since the movie was shot on location in Hawaii, it also has a lot of beautiful scenery to show off (there’s even a great helicopter scene that provides some gorgeous vistas) and the content is more worthy of an upgrade to high-definition. Unlike Malibu Express, I have no problem recommending this Blu-ray upgrade to all fans of the film. Malibu Express is still probably worth upgrading for most viewers, but I would say Hard Ticket to Hawaii is worth upgrading for all.

For those who read my Malibu Express review, the extras included on this list are going to look very familiar. Like that Blu-ray release, this one also includes an introduction by Andy Sidaris, an audio commentary, a behind the scenes featurette, and trailers. The behind the scenes featurette on this release isn’t quite as long (36 minutes versus 43 minutes) but it is still an interesting look at filmmaking. It is only in 480i but like the Malibu Express featurette, I would recommend watching it. The other special features are nice additions but I rarely listen to commentaries and almost never watch trailers.

While Malibu Express is a serviceable B-movie that I enjoyed watching, Hard Ticket to Hawaii is an improvement in almost every area. It has one of the funniest moments in B-movie history (along with plenty of other things to riff on), the story makes more sense, and the Blu-ray video quality is great. I highly recommend Hard Ticket to Hawaii to all B-movie fans (as long as you don’t mind some gratuitous nudity) and would even call it a B-movie classic.

One thought on “Hard Ticket to Hawaii Blu-ray Review”