Throughout the year, Mill Creek Entertainment has been putting out a ton of Andy Sidaris films on Blu-ray for the first time ever. If you’ve been following my reviews of them (I’ve reviewed all of them so far), you likely know that I more or less loved the first three films he made, at least as B-movies. However, my opinion has been much more mixed since then. I felt like the fourth and fifth films lost some of the charm that prior Andy Sidaris B-movies had. They are better films from a storytelling and technical standpoint (they even made some sense!) but they aren’t nearly as fun to watch. Thankfully, I’m happy to report that the sixth film (Do or Die) marks a return to form for Sidaris. While it isn’t quite as hilarious as Hard Ticket to Hawaii or Picasso Trigger, there’s a whole lot more to laugh about here than Savage Beach or Guns.

Note: As usual with Andy Sidaris films, the review and rating I have given Do or Die is based on it being a B-movie and not what it would deserve if it was being reviewed as a “serious” film. Those not into B-movies can ignore the pretty high score I gave the film (at best I would give the film a 2/5 for these viewers) and should probably skip Do or Die as it is not a “good” film. However, as an unintentionally hilarious B-movie it is probably worth a watch for most. It’s one of those “so bad, it’s good” films.

After the past five films, our favorite female agents (Donna and newer addition Nicole) have become quite the sensation. Their “skills are legendary” according to the villain of this movie. At the beginning of Do or Die, they are lured into a trap laid by the villainous Kane (Pat Morita aka “Mr. Miyagi” from The Karate Kid series). He has the chance to kill them but instead simply lets them know that he has hired six pairs of assassins to hunt them down and attempt to end their lives over the coming days. The girls, along with several other returning characters (including Erik Estrada in a new role after being the main villain of the previous film, which no one even questions) must neutralize these threats one by one or lose their lives. That’s basically the gist of the movie and if you’ve seen other Andy Sidaris films you likely know many of the scenes and plot points that will make an appearance (the same things that show up in just about every single one of his films; quarter scale model planes, sex scenes, undressing scenes, helicopter attacks, etc.).

While there aren’t that many new ideas presented in Do or Die (at this point I can pretty much predict at least five scenes that will happen in every film), it does mark a return to the cheesy B-movie antics and action scenes of the earlier Andy Sidaris films. He started to get away from those two things that made his movies fun in the last two films and it wound up hurting those entries for a B-movie fan like me. Thankfully, there are more funny and ridiculous moments in Do or Die than the past two films combined. From some of the most ridiculous looking cars I’ve seen (I named them “frog car” and “toad buggy”) to nonsensical plot points (the cops show up immediately to an extremely remote explosion then let the only two cars in the area go on by without stopping them), there’s definitely some funny moments in Do or Die. Add in two of my favorite comedic “assassins” in this entire film series (the two “chefs”) and some very mockable dialogue, and we’re almost back to the hilarity of the second and third films. The film even recognizes the ridiculousness of the Sidaris formula in one moment, where the characters make fun of the thinking jacuzzi (“Don’t you do your best thinking in here?”). However, the best moment by far is the introduction of another ridiculous piece of weaponry. I won’t spoil what it is, but it is just as legendary as a certain gun from Picasso Trigger and will almost certainly make my list of top five Andy Sidaris film moments that I’ll be writing once I’ve seen them all.

Even though at this point I can pretty much predict everything that is going to happen in these Andy Sidaris films before they happen, I liked the plot of Do or Die a lot more than the past two movies in his filmography. There’s some scenes that don’t make sense or add nothing to the film but having six different teams of assassins attack Donna and Nicole leads to much more action than the past two films. Those films also tried too hard to be “serious,” Do or Die marks a return of over-the-top characters like the dimwitted “chefs” or the pathetic ninjas (of course there had to be karate in a film with Mr. Miyagi), ridiculous weaponry, and lines of dialogue so cheesy and corny you just have to laugh at it. We even get to see Sidaris’ love of quarter scale aircraft cemented as one scene involves a QSAA (Quarter Scale Association of America) meetup. While this scene is almost completely pointless to the story, you can tell Sidaris is geeking out over it and as someone who loves seeing people passionately show off their hobbies I actually kind of liked this otherwise inessential scene. At this point, Sidaris seems to have relearned what makes his films fun. While the babes, bombs, and bullets were still there in the past two films, they didn’t have the “cheese” or ridiculous action that his earlier films had. Do or Die does.

While I mostly like Andy Sidaris films for the action and B-movie antics, of course there are some viewers who mainly care about the gorgeous women and sex scenes. Do or Die is possibly filled with even more of both than any of the past films in the “Triple B” series. There are four or five sex scenes, most of which feature the ex-Playboy Playmates from previous Sidaris films but there is also some new blood as well (including the extremely busty Atlanta played by Pandora Peaks). While these sex scenes are definitely cheesy and look like something that would have aired on The Playboy Channel, they are actually pretty stylishly shot. As I’ve written before, Andy Sidaris may not be a great director or storyteller (at least outside of the realm of B-movies) but he has a surprisingly good eye in the cinematography department. While I don’t care for sex scenes that much, I have to admit that they are well shot (though in a very cheesy, ’90s softcore porn kind of way). I do want to wipe two of these scenes from my memory though, as seeing Mr. Miyagi give a naked woman (who is likely a third of his age) a massage and later having sex with her is just too much.

Mill Creek Entertainment is more of a budget Blu-ray and DVD publisher, meaning the video quality on their releases tend to be on the mediocre side. However, they’ve done a very solid job with these Andy Sidaris Blu-ray releases as all of them have at least looked solid. This is likely because each of them was restored in 4K (though not released on the format). Do or Die is no exception. In fact, it might actually be the best looking film in the series released so far. The only real issue I noticed was one short scene that looked really grainy. Every other scene looks good to great. Do or Die also sees some new locations as most of the film actually takes place outside of Hawaii or Las Vegas for once. Louisiana is featured prominently, meaning forests, rivers, and the like are shown instead of the same old beaches and casinos that have been the main shooting locations of prior Sidaris films. While this means some of the glitz and glamour is gone, it also means some fresh scenery for a series that desperately needed it.

Like every Andy Sidaris film released on Blu-ray by Mill Creek Entertainment, the extras include an introduction by Sidaris, an audio commentary, a lengthy behind the scenes featurette, and trailers. I’m not the biggest fan of special features but these are solid if unspectacular additions for hardcore Sidaris fans. The only problem is that like the films themselves, these are starting to become a bit repetitive.

While Do or Die is only watchable for B-movie fans and the repetition of action sequences and plot points is starting to take its toll, it is also much funner than the past two installments in the “Triple B” series. When I watch an Andy Sidaris film, I’m looking for cheesiness and action. Do or Die provides both and at least in my book, is the third best Andy Sidaris film out of the first six. Hard Ticket to Hawaii and Picasso Trigger are slightly better, Malibu Express is slightly worse, and Guns and Savage Beach bring up the rear. Overall, I would recommend Do or Die for B-movie and Andy Sidaris fans, especially those who prefer his cheesier films.

Buy Do or Die and/or Guns on Amazon: Do or Die, Guns 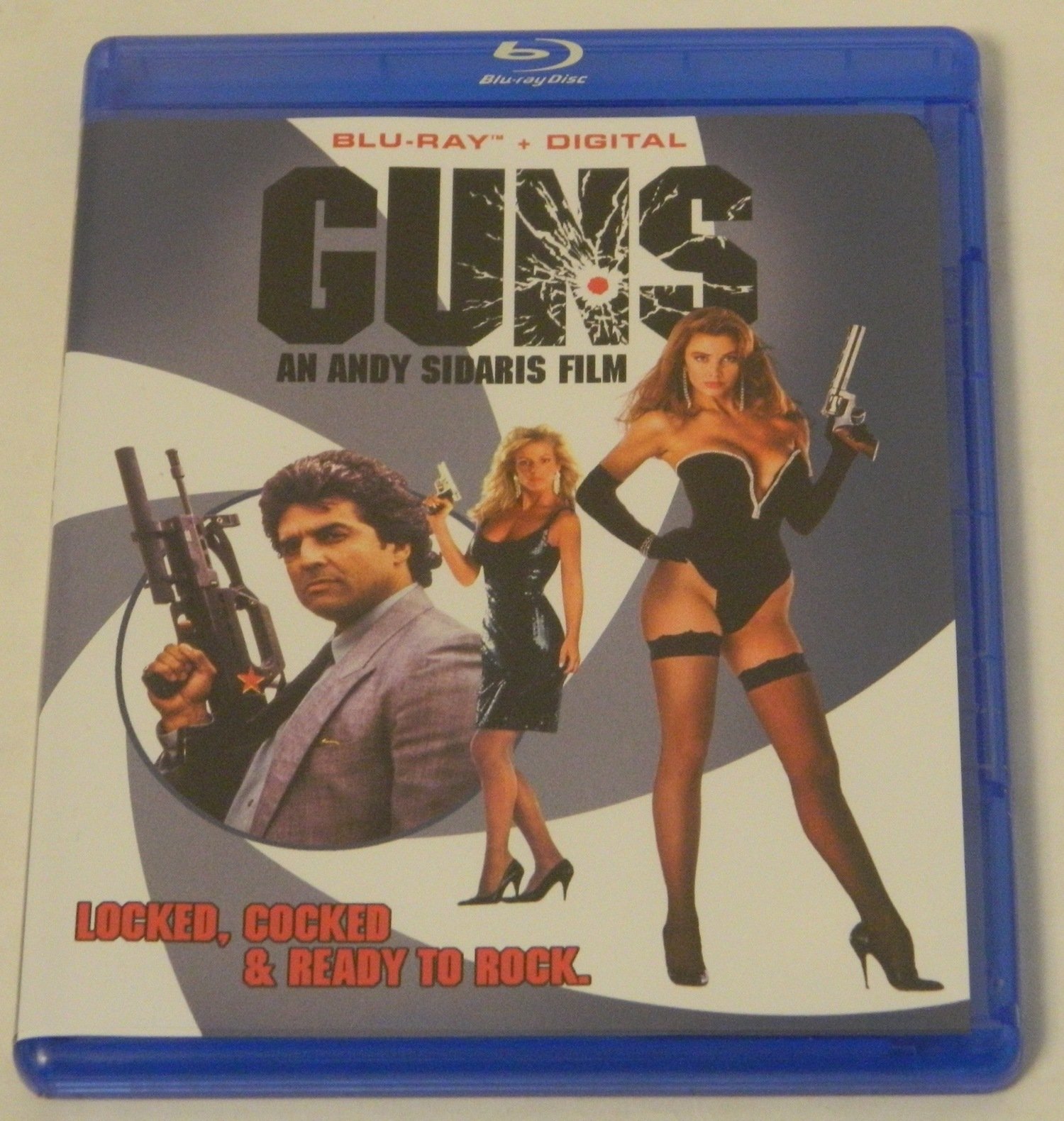