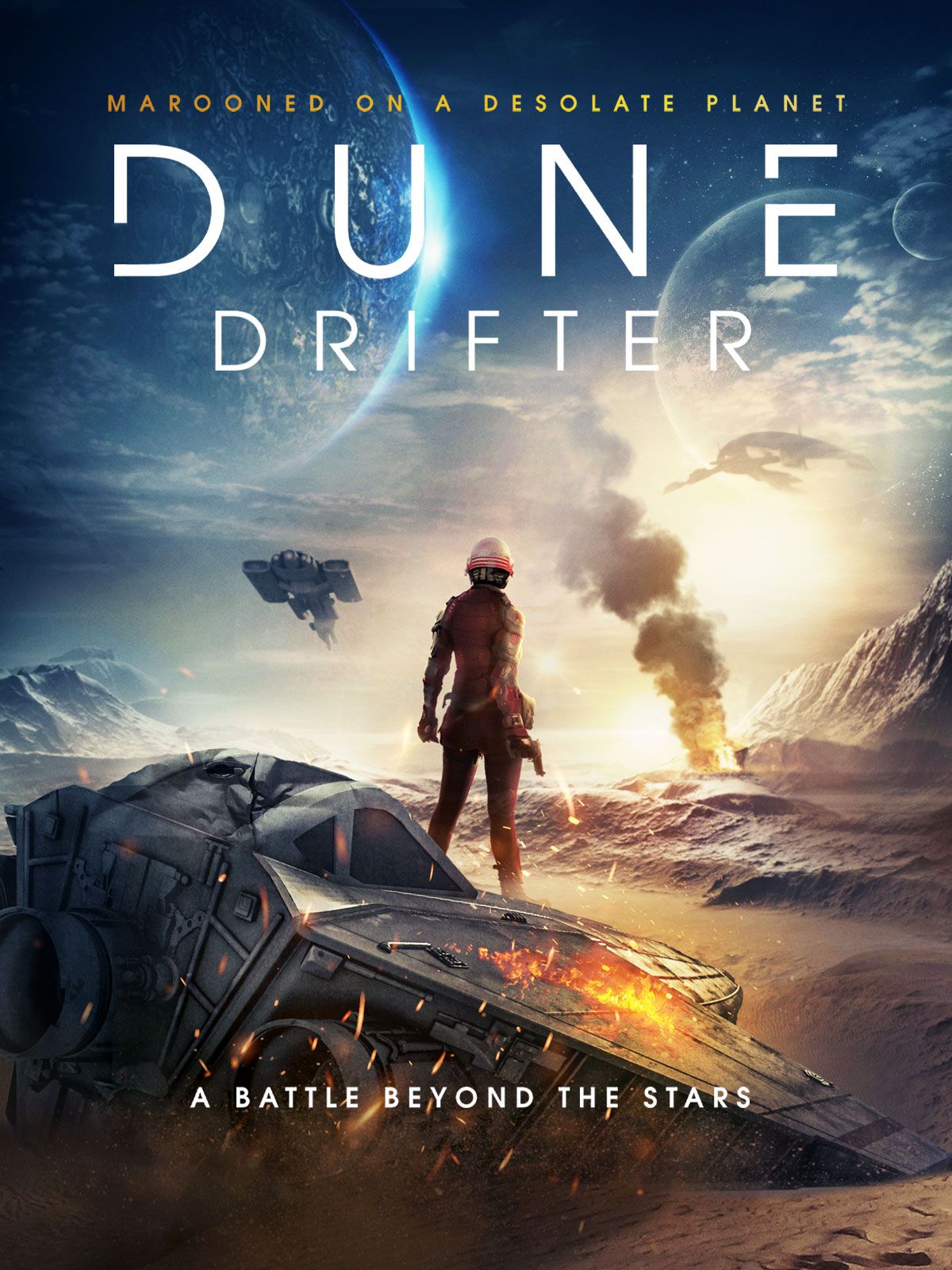 This year has arguably not been a great year for sci-fi movies. Much of this can be blamed on the pandemic shutting down theaters so most blockbuster sci-fi movies have been delayed. As a big fan of sci-fi this has lead me to checking out some of the smaller budget movies from the genre that have come out this year. This brings me to the movie I am checking out today Dune Drifter. Dune Drifter is a smaller budget British sci-fi film that had a pretty interesting premise in my opinion. Instead of huge space battles and tons of action sequences, the movie is based around survival on an alien planet after a crash landing. Dune Drifter may not have the budget of most sci-fi movies, but it uses its budget well to tell a compelling and unique sci-fi story.

In Dune Drifter humanity has been in a longtime war against an alien race. A group of rookie space fighter pilots have been called in to provide support for a large battle, but are ambushed by a far superior force. One of the ships is shot down and crash lands on the nearby planet. The pilot is mortally wounded while the gunner is left alone to try and find help. With only two days left on her life support she needs to try and fix her ship and rejoin the fleet still in battle above the surface. When an alien ship also crash lands on the surface, she must fight to survive while also finding a way to leave the planet.

Dune Drifter is kind of odd as it kind of feels like two different movies that got blended together. At first Dune Drifter feels like your typical sci-fi movie. You can tell that the movie took a lot of inspiration from other sci-fi movies as it is shot in a similar way. In particular the early space battle reminds me a lot of the original Star Wars trilogy. I will say that it is scaled down a little mostly because of the budget, but these elements are pretty impressive for more of an indie film. In a way the early parts of the movie kind of feel like an homage to other movies from the genre.

Where Dune Drifter differentiates itself is that the space battle is not a major element of the movie. In most sci-fi movies the heroes slowly but surely eliminate the evil threat and go on to win the battle. Things go a little different in Dune Drifter as around a third to a fourth of the way through the movie the main character’s ship is shot down and they crash land on a neighboring planet. Instead of focusing on the major space battle, the movie instead focuses on trying to survive after a crash. I am not sure I have ever seen a sci-fi movie that mostly focuses on a spaceship after it has been shot down.

I thought this was a really interesting premise for a sci-fi movie. Instead of a ton of action sequences the film is more focused on surviving on a harsh planet. Dune Drifter has a decent amount of action sequences, but they are spaced out. The movie has a much greater emphasis on the main character just surviving. This means that character development plays a big role in the movie. I think this is one of the film’s greatest strengths. While most of the movie features only one character, I thought the character development was good. The plot is compelling and is well written in my opinion. The movie does a good job telling an interesting story about trying to survive on an alien planet.

When watching Dune Drifter you can tell pretty early on that the film was made on a smaller budget. IMDB estimates that it was made for a little over $1 million. That might seem like a lot, but it really isn’t when compared to most sci-fi movies. Blockbuster movies can regularly cost over $100 million. A small or large budget doesn’t necessarily make a movie good or bad. I mostly bring this up because I was genuinely impressed with how well the movie uses its limited budget. There are times in the movie where you can tell it was shot in a particular way in order to lower the cost. I thought this was smart as it allowed the movie to stretch its budget farther. Instead of relying heavily on CGI Dune Drifter relies on a lot of practical effects. When it does use CGI it looked quite a bit better than I was expecting as well. The movie couldn’t directly compete with large budget sci-fi movies, so instead it decided to focus on creating an interesting story of survival. I thought this emphasis was to the benefit of the movie.

I would say that the biggest issue that I had with Dune Drifter is that the pacing can be a little off at times. Simply put Dune Drifter is not your typical action packed sci-fi movie. Part of this is due to the budget, but I think it also has to do the the overall premise of the movie. A movie about survival on an alien planet wasn’t going to be filled with action. The movie has its moments, but there are times where it can be a little slow. The movie isn’t overly long at 101 minutes, but I think it could have been streamlined a little better at times.

When most people see Dune Drifter they will probably think that it is just another generic sci-fi movie. In some ways it is as you can tell that it was inspired by other movies from the genre. Where the film differentiates itself is that instead of focusing on your typical space battle, a large majority of the movie is about trying to survive after crash landing on an alien planet. In a lot of ways Dune Drifter is as much a survival film as a sci-fi film. This works in Dune Drifter’s favor as it does a good job in this area. The character development is quite good and the plot is interesting. At times you can tell that the movie was made with a smaller budget, but it is still impressive what was able to be made as it uses its budget well. The movie does have some occasional slow points though where it drags a little.

My recommendation for Dune Drifter comes down to how much you like sci-fi and whether you think the premise sounds interesting. If you either dislike sci-fi movies or prefer action packed movies, Dune Drifter might not be for you. Fans of sci-fi that think the premise sounds interesting though will probably enjoy the game quite a bit and should check it out.

We would like to thank Dead Pixel Productions and 4Digital Media for the screener which was used to write this review.

Recommended For: Sci-fi fans that think the premise of trying to survive after crash landing on a strange hostile planet sounds interesting.