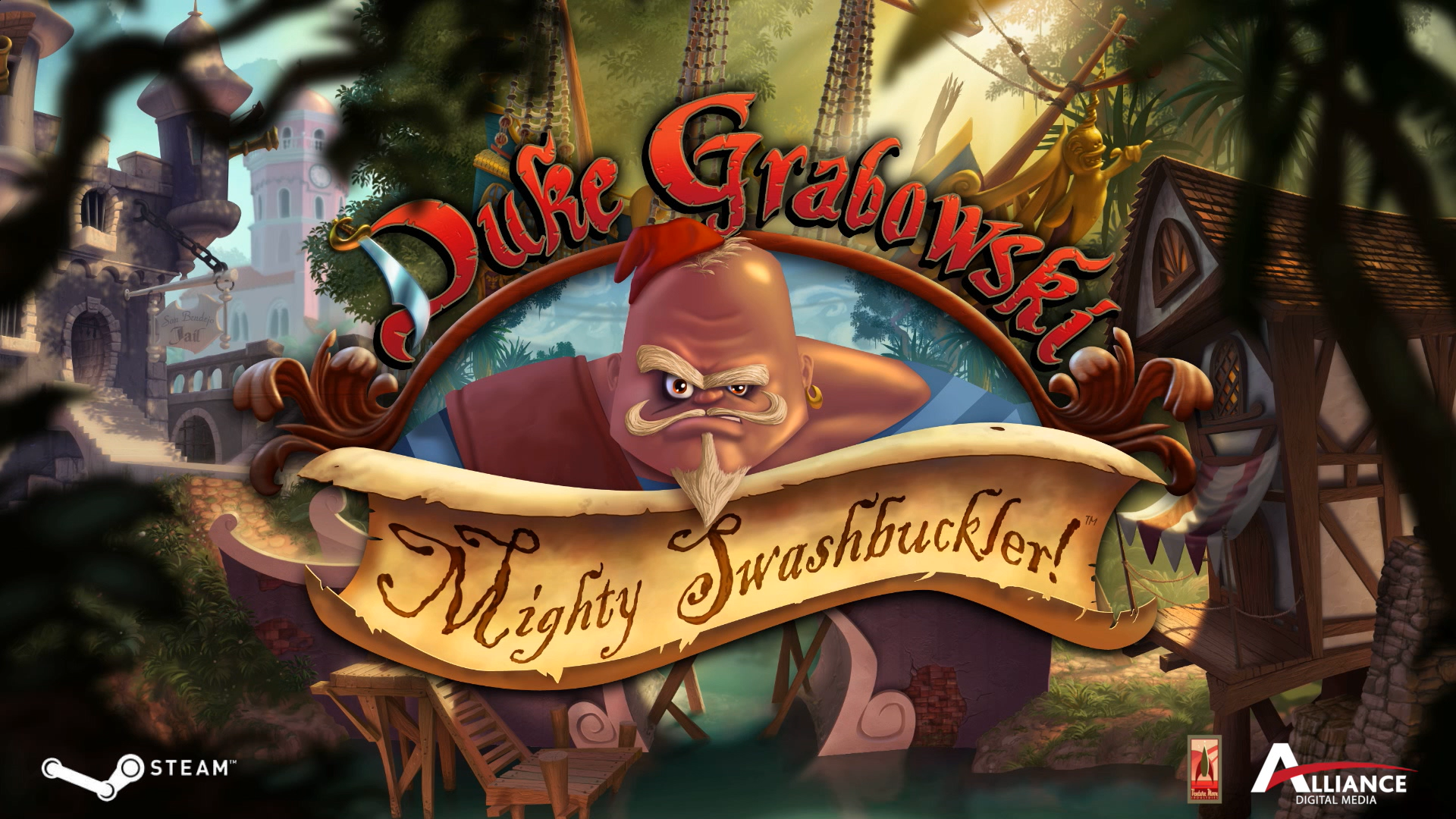 
In Duke Grabowski, Mighty Swashbuckler you not surprisingly play as Duke Grabowski. While a great fighter and pirate, Duke knows next to nothing about women. When Duke’s captain dies, Duke and the rest of the crew can’t decide on who should be the new captain. No one takes Duke seriously when he puts his name in for captain. The crew decides to send him on a pointless quest while they decide who will be captain. Knowing that Duke can’t talk to women, they agree to let him be captain if he can woo three women knowing that he won’t be able to succeed. So Duke has to prove them wrong and become a ladies’ man in order to become captain like he deserves.

The problem with the story is that more could have been done with the premise. The game tries to be funny but I just didn’t find it to be very funny. While other people will feel differently, I rarely laughed during the game. Since the game is not really taking itself seriously it kind of had to be funny and I just didn’t think it was.

In addition to the story I found the presentation to be a little hit and miss. The game has some great backgrounds and some of the characters are well done. Other characters could have used a little more work though. Some of the animation could have been better since the lip syncing is not always that great. The audio also has its’ pros and cons. Some of the voice work in the game is really good while other voice work is not great. The music for the most part is good but it gets kind of repetitive after a while.

Overall I found Duke Grabowski, Mighty Swashbuckler to be a decent game but it has two significant issues.

First the game is quite short especially for an adventure game. It took me around 2.5 hours to beat the entire game which is pretty short for an adventure game. If I rushed through the game instead of taking my time like I did, I bet I could have finished the game in closer to two hours. The game ended so quickly that I thought that there had to be a twist or something to make the game longer but there wasn’t one. The problem with the length is that with most adventure games there is next to no replay value. I got every single achievement in the game in the 2.5 hours and outside of replaying the story there is nothing to be gained by playing the game a second time.

Most likely part of the reason why the game is kind of short is that it is an episodic game with Duke Grabowski, Mighty Swashbuckler being just part of a longer story. Story wise the first episode feels like part of a larger story and I don’t have a problem in that regard. I just think more content could have been added to the first part of the story to make it a little longer.

The other problem that I had with the game is that it is way too easy. I actually think this contributed to how short the game ended up being. I honestly don’t remember a single challenging puzzle in the entire game. The puzzles are straightforward to the point where it is really hard to miss what you are supposed to do in a given situation if you talk to the people and explore the world. Generally the right difficulty for adventure games is pretty hard to pinpoint. Some games are too challenging which usually involves having obtuse puzzles that you can only solve by trying every item with everything in the environment until something works. Those games are frustrating. Duke Grabowski, Mighty Swashbuckler is at the other extreme in that it is pretty obvious from the outset what you need to use each object for. This means that the game isn’t frustrating but it is also not very challenging. If you have any experience playing point and click adventure games I don’t see you having any troubles solving the puzzles in the game.

Overall I found Duke Grabowski, Mighty Swashbuckler to be a decent but not great adventure game. The story has an interesting concept but it doesn’t quite live up to it. The gameplay is basically what you would expect out of a point and click adventure game. The presentation is good in some areas but in other areas could be better. The game also suffers from being a little too easy and short. Duke Grabowski, Mighty Swashbuckler is not a bad game but there are better point and click adventure games.

If you don’t care for point and click adventure games, Duke Grabowski, Mighty Swashbuckler is not going to be for you. If you like point and click games though I think you can get some enjoyment out of the game. If the game’s premise doesn’t really interest you though I would probably recommend waiting for a sale.