The CO-5 Company was a board game publisher from the 1960s based out of Benton Harbor, Michigan. If you have never heard of the CO-5 Company that is not surprising. The CO-5 Company appears to have only existed for around ten years in the 1960s and ended up only making six different games. Pretty much the only game they ever made that most people would recognize is the game Aggravation. While Aggravation is not a great game in my opinion (it is is essentially Parcheesi/Pachisi/Ludo), there are a lot of people that really enjoy Aggravation. After their success with Aggravation, the CO-5 company tried their luck at creating another popular board game. One of these attempts was the game Gooses Wild. While it has some problems, Gooses Wild is a decent dice rolling game.

On a player’s turn they roll both dice and move their playing piece the corresponding number of spaces. 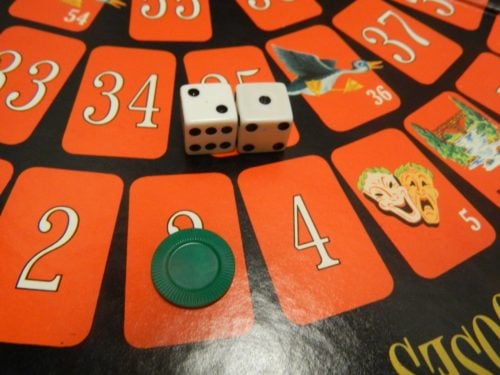 The green player has rolled a three so they move their player piece to the three space.

If a player rolls a nine, the player moves their playing piece and gets to roll again. When a player lands on the same space as another player, the current player takes the space that they landed on and the other player must move their piece to the space that the other player’s piece was on at the beginning of their turn. If a player lands on a space with a goose on it, the player will move their playing piece the number rolled from the goose space they landed on. 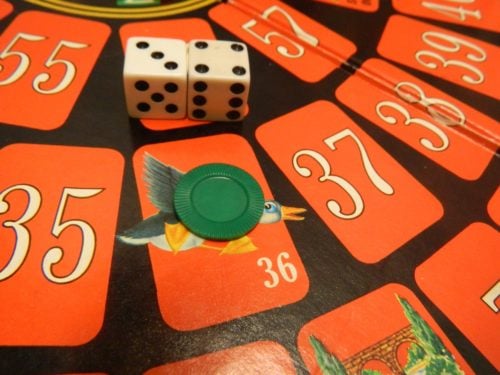 This player landed on the goose space with a roll of seven. The player will move their playing piece seven more spaces to space 43.

The goal of Gooses Wild is to land exactly on space 63. If a player should move past space 63 their piece returns to the start and the player must put one of their chips into the pot. 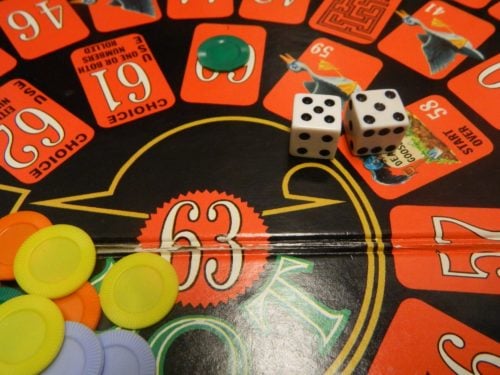 When a player lands on space 61 or 62 they can choose to use only one of the two dice they rolled to try and land on space 63. The first player to land on space 63 is the winner of the current game and takes all of the chips in the pot and on the gameboard. 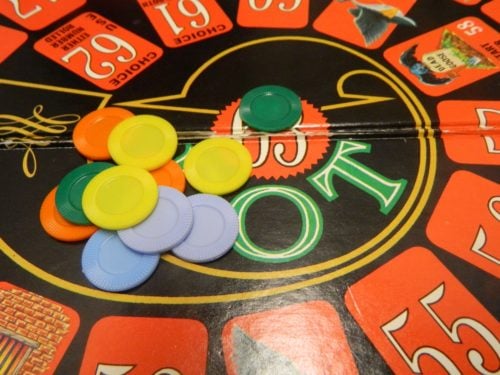 The green player has landed exactly on space 63 and has won the game.

Players can play individual games with a different winner for each game. The other option is to play multiple games and count up chips won (not including a player’s own chips). Between games players give back all of their opponent’s chips and whichever player reaches a designated number of chips first wins.

Lets start with the basic game. The basic game is just a very boring generic roll and move game. Roll the dice, move to your next space and hope to land on space 63. That is basically all there is to the basic game. There is no strategy to the game since outside of rolling the dice you have no impact on the game. The game is really simple and easy to play but it is just so dull. Whoever rolls the right number at the right time will always win the game.

One thing that surprised me about Gooses Wild is that it is actually considerably easier to land on space 63 than you would think. Either the players in the games I played got really lucky with dice rolls or the board is set up in a way where you just seem to roll the right number at the right time. While several players will end up moving past space 63 in each game, one player almost always landed on space 63 on their first time around the board. I somewhat attribute this to the goose spaces which seem to help put players on the right track to get in a position to land on space 63. The “Golden Nine” and “Comedy and Tragedy” spaces are kind of clever as they are designed to utilize the goose spaces to either make you land directly on space 63 or move past space 63.

While the alternate rules don’t make Gooses Wild into a good game, they do significantly improve the game. I personally would never recommend playing the game without the alternative rules. The alternate rules don’t change the game a lot but they at least add a little strategy to the game since you can choose to purchase additional playing pieces which lets you choose which piece to move on a given turn. This improves your odds of landing on space 63 and gives you some decisions to make in the game other than just rolling the dice. If you play with the rules where you need to acquire a certain amount of chips you need to decide whether the trade off of having a better chance at winning a round is worth potentially giving an opponent more chips.

While the alternative rules improve Gooses Wild, they do add their own issues to the game. While the “Golden Nine” space is kind of fun, it becomes rigged if you use the alternate rules. Basically whenever a player gets a playing piece on the nine space they will just sit it there hoping that they will roll a nine and automatically win the round. Basically the strategy of the game becomes holding one playing piece back hoping to land on the nine space and then rolling a nine to win the game. Having multiple playing pieces in play at the same time also makes it too easy to land on space 63. Rarely do you ever go over space 63 when you have multiple playing pieces since you just move a different piece if your roll would move another piece past space 63.

Gooses Wild is basically one of those really average games. There is not anything particularly wrong with the game except the total reliance on luck and the lack of input by the players. Gooses Wild is one of those quick and easy to learn and play games that you don’t really have to put too much thought into. It is the type of game that you would play with friends and family when you want something to do put don’t really want to put too much thought into whatever you are doing.

If you hate games with little player input and high reliance on luck, Gooses Wild is definitely not going to be for you. If you are looking for a quick and easy game that you can play with non-gamers and is really cheap (a couple dollars) it may be worth picking up.